Facing Down the Devil

I've been back from my trip to Iona a little over a week now and I haven't posted anything.  I keep telling myself that I'm still processing the trip.  There is a lot bouncing around in my soul, nothing serious, part being tired from the drudge of travel and part trying to organize my thoughts.  And I suspect part may be a little bit of the devil in there trying to keep me from doing what I need to do to send out the good news of the Kingdom of God.

Because I got a great picture of the Kingdom of God in Iona. 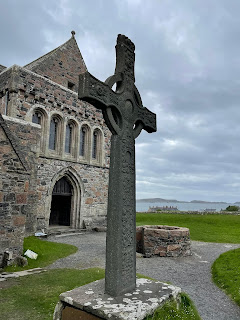 I still can't get over my great fortune to see this magnificent abbey and Celtic cross in person.  Our group of 27 worshipped God inside the 12th century abbey twice a day.  There were not just this one but four of the classic Celtic crosses in front of the abbey, each one different.  I was able to see them and compare and now have a preference:  the St John's cross seen here. In my next post I'll show you the inside of the abbey because I know that's what you've come to see.

At the risk of sounding ungrateful from the start, let me just confess that I did not have the dramatic thunderbolt God experience I was hoping for.  I guess after all the buildup I shouldn't be surprised to have a bit of a let-down at a merely ordinary fantastic trip.  And I wonder if the devil was behind it.

I know she was all up in my face from the beginning of the trip. Now I know we usually refer to the devil in the male gender but in one instance it was female. This is the age of gender equality, after all.

I left my house with my one overhead suitcase and small backpack for under the seat, satisfied that I had packed perfectly. There would be no lost luggage. It was just me in the car and I was going to leave the car at the airport.  Traveling solo, I felt free as a bird immediately.  I knew just exactly what this trip was for: I was headed out to go have a personal experience with the Holy Spirit, and I was focused as all get out and feeling my Jesus.

I got about two hundred yards from the house and had reached full driving speed, which is around 60 miles an hour on these roads when the German Shepherd from the neighbor's house ran directly in front of the car.  She came so fast there was no way I could have avoided her except that at the last possible instant she pivoted and veered off maybe one inch from my bumper. I never even had time to react or slam on my brakes.

In that instant a thousand thoughts flew through my mind:  If I had hit her, it would have been a hard impact because I had already picked up enough speed to do a lot of damage, if not kill the dog.  I would have to stop and go to the neighbor's door to talk to them.  I knew this was the family dog and they had three little girls and they would have been heart broken. I knew these neighbors just enough to know they aren't friendly and in the two years since they had moved in have rebuffed every effort I have made to welcome them to the neighborhood.  They barely answer when I greet them on the road. So, killing their dog would have been a whole new classification of  awkward, not to mention leaving a dented and bloody mess all over the car I intended to leave in the Texas sun for two weeks at the airport parking lot. I'm pretty sure the cops would have tagged my bumper, "We want to talk to this lady as soon as she lands."  And, just as bad, the whole thing would make me late for my flight.  I could only imagine the complications.

It's amazing how many individual thoughts can fly through your mind so quickly.

And here's the thing that has stayed with me for the past two week's since it happened:  I swear that dog grinned at me.  I could see her muscles move along her front legs as she changed direction to pivot away from my car but she looked straight into my eyes and laughed.  It was a game to her.  I felt a connection with her and she was telling me that the game was on: I should prepare myself.  This would be only the first of many obstacles on my trip and I should get used to them.

Yeah.  Thanks for the warning, dog. I could see the devil in her laugh. A challenge.

She was right.  The trip threw obstacles my way.  The obstacles were mostly physical, although some were mental. One flight was cancelled and the airline graciously put me in a car to drive me clear across London to a different airport to catch the only other flight available with only 15 minutes to spare.  On foot, I enjoyed the intellectual exercises of traveling alone without the tiniest sense of direction.  I used the Google map feature on my phone a lot then once when my phone died I realized the bus stops usually had a rudimentary map on them that would suffice. But I think this was also stressful enough that added to my chronic foot pain.  My feet don't generally hurt unless I'm under stress.

I'm home in one piece, which is more than I can say for Joanna whose foot came home broken and for the two guys who came home late due to an unfortunate case of Covid.

But I did have a few insights.  Come with me as I explore what God had to say.

Looking forward to reading the next segment of your journey.