Ending and Beginning with Laughter

I spoke at my dear friend Linda’s funeral last week and wore my Groucho glasses.  It was a private joke.  Too long to go into here and it’s not the reason for today’s story anyway.  Linda was a big proponent of the idea that funerals not be too solemn so that was my little contribution. 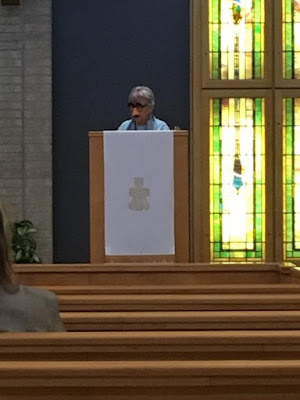 We put the "fun" in funeral


One of the other speakers was another old friend and mentor to us both, the Rev. Dr. John Williams, Chaplain at Austin College.  Standing around before things started we caught up on our journeys and he asked me what I was up to.  John is the kind of guy who deserves a real answer to his questions.  And that’s how John Williams became the first person I shared the news that I’ve been accepted at Austin Seminary to be part of their Certificate of Ministry program.  It will take two years to get the certificate on-line. I should start classes in April.  Concurrently, I’ll also be part of a separate program through Grace Presbytery to become a Commissioned Pastor.  The Presbytery part is still pending since I haven’t heard from them yet. On the surface it sounds like just seven classes over two years and some weekend seminars. It's not an ordained pastor gig--I understand it to be more like pulpit supply.  But my friend/pastor Julie told our congregation this morning that it will be a lot of work and I’m starting to worry what I’ve gotten myself into. I still don't really know how big of a deal this is or if I can even do it.


This all started a few months ago at a Presbytery meeting when I went to a lunch break-out session to inform us about this “new” deal where small churches who can’t afford full-time pastors can get one of these Commissioned Pastor folks to help them out in a pinch.  I went to the meeting thinking I would “go get us one of those people” for our church.  Only to find out the meeting was to find out “how to become one of those people.”


Then the following day the sermon was on Matthew 25:14-30, the Parable of the Talents where the Master gives the three servants different amounts of money/talents and they do different things with them and the master gets so upset at the servant who hides his talent because he was afraid he would do something wrong with it and mess up. The point of Julie’s sermon was that God gets more angry if you do nothing with the talent He gives you than if you blow it.


And I’m sitting there in the pew thinking to myself, “Uh Oh.”


This was not my idea at all.  I have to trust that if God wants this to happen then it will happen. So, I’m going to take it one step at a time and see where this road leads.


On the way to church this morning my mind was still on Linda and her funeral and the stories we didn’t tell.  One of my favorites was one I told at her ordination.  It was the story of how I knew she would make it; how I knew she would succeed.  It wasn’t always so obvious.  When she started seminary she was middle-aged with children at home.  She had started late in life.


The first time I heard her preach it was at a church that had huge clear glass windows in the chancel.  Behind them was farmland and pasture.  As Linda was preaching I could look past her shoulder and see out the window and there was a gorgeous white egret off in the distance lumbering across the pasture preparing for flight.  She ran for a while then started flapping her wings.  As she approached the church windows it appeared she would never be able to get into the air in time to miss the building. She had started too late. All I could think was “That bird is going to fly smack dab into this window!” and braced myself for the impact.  But just as she got to the building she found a burst of energy and took to flight and soared into the air like she owned the sky and it was a marvelous sight.  She was pure white and beautiful and graceful and magnificent.  And that was the moment I knew Linda would become an ordained minister.


As I drove to church this morning I went over that story again in my mind just because I love the memory. I was feeling pretty mellow and all- the kind of mellow you get on your way to church when everything is going right.


I happened upon a flock of little brown birds fluttering alongside the road nibbling on something on the ground.  Just as my car approached going 70 mph, one of them flew up high enough that my windshield caught her and smashed against her- instantly breaking every bone in her body and flinging her off my car.  It happened in in the blink of an eye, an unceremonious "splat," leaving behind nothing more than a couple tufts of downy feathers and a spot of bird goo on my windshield.


It took about fifteen seconds to register the irony of Linda’s magnificent white egret soaring to the sky and my little brown sparrow smashing against the windshield.  Then I started laughing.  And the laughter turned to tears of panic running down my cheeks and then back to laughter. And I laughed all the way to church.

Good luck, or perhaps I should say God's luck, on this new endeavor. Elisabeth Schmalstieg

Sallie Watson said...
This comment has been removed by the author.
10:07 AM

So excited for you, Jane! It will indeed be a lot of work, but you will soar like that egret. Anyone who wears Groucho glasses during a memorial service is halfway there. Eager to follow your CIM adventures!