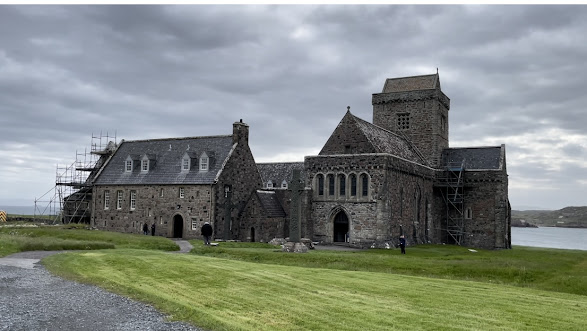 This picture was taken on our first day there when it was windy and cloudy but that was our only cloudy day.  The rest of our time on Iona was absolutely glorious.  We couldn't have asked for better weather.  Scotland is far enough north that when the year turned to summer the days had almost no night.  I never saw a dark sky nor stars.  I reallly missed stars because we were so remote I can only imagine how many we would have been able to see.  But we did have glorious wind!  In the evening it got quite cold from the wind.  I usually had to wear my coat and a couple of time resorted to a wool hat and gloves.  Yes, gloves.

We stayed in the Columba Hotel which had the perfect location.  If we turned right out of the front it was only a short walk up the hill to the Abbey and by turning left and going downhill we passed the Nunnery, a lot of gift shops, the Community Center where we met every evening and eventually the sea where the ferries docked.

The view out of the hotel was magnificent. Every view on the island was almost the same:  blue sky, green grass, tranquil livestock: either sheep or Highland cows ("Hairy Coos") 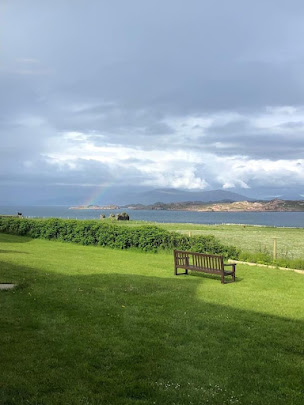 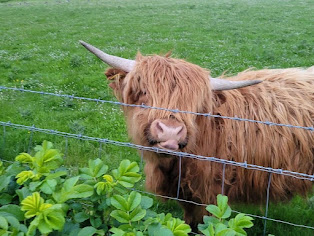 This Highland Cow hung around outside the hotel window enough we ended up giving him a name although I'm afraid I've already forgotten it.  Lauren went out to pet it at one point and it ran away, scaring up a flock of geese in the process.

The Abbey was the dominant building on the island of Iona.  We worshipped in it twice a day and I have to say it was one of the highlights of my life to have this opportunity.

It was built over a period of time.  St Columba landed on the island in 563 so that's how old the Christian presence is here.  The first Abbey was built in wood, then a stone building from the 1200-1400's, then abandoned, then enlarged, abandoned for a while then rebuilt, and restored and upgraded as needed even as recently as a couple of years ago when it got a new sound system. Anytime I tried to pin down exact dates my head started to spin.  Suffice to say that it is old. It is older than St Peter's Basilica in the Vatican City.  It is more simple in design but still a very sturdy building made of huge stones.

The Iona experience begins well before entering the building.  Most days are windy and the Holy Spirit of God whips up the hill to greet you as you walk.  The Abbey stands alone and you have time to prepare yourself if you are walking alone in thought with the wind as your companion.  We were a group of 27 people who had all come to experience God in this place.  We attended both morning and evening services the Iona community provided. Our schedule was busy enough and the attendees were used to a busy schedule so that when we transitioned it was a fast transition.

Now, with two weeks at home and time to reflect I realize what a great opportunity we missed by not taking at least one of these walks to insist each person walk to the Abbey in silence and alone.  Preparation for worship in this Abbey should really begin with the glorious walk up the hill, bathing in the wind, washing your eyes with the green of the grass and the blue of the sky.

I walk slow naturally.  But my nature is to walk slowly.  Even if I had longer legs and were a younger person I think I would be a slow walker.  Henry Thoreau adapted this walk as he went through his woods and called it "sauntering."  It's not a new word and I think comes from French meaning "sans terre" ..........something about the earth.  I really don't know.  I could have just made the whole thing up.

But you certainly notice more when you take it slow and look around.  I noticed the birds who had built nests in the brick walls we passed on the way to our community talks in the evening.  The stones were arranged with wide gaps and the birds had built their nests and the babies had hatched so mothers were flying in and out the wide gaps.  I spotted one mother flying up to the wall and stopping to look me over and see if I was a safe human before she entered her access hole with a fat worm in her mouth.  Once she took too long and I saw a hungry mouth emerge from the hole too impatient to wait any longer for its worm. 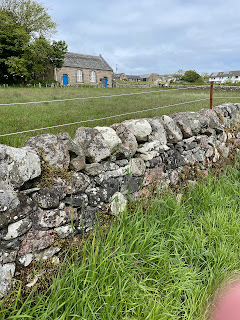 There were flowers everywhere. and the grass was green. And the sky was always so blue.  We may have been the only visitors to get a full week of perfect weather because I've heard stories of the exact opposite:  a week of solid rain.

When you get to the grounds there are three massive Celtic crosses.  These are the original crosses that all the Celtic crosses are based on.  I never noticed the different designs but St Martin's is from the 8th century.  Only the base of St. Matthew's cross survives. And my favorite, St John's, is a concrete replica of the original which is only fragments pieced together and kept in a museum.  I learned that the circle of a Celtic cross, usually thought to represent the Roman sun god or Christ's halo, also has a practical use:  it reinforces the cross arms and keeps them from breaking off.  Those Celts were the practical sort.  My kind of people. I'm guess they had a lot of experience with crosses.

The building is mostly stone.  The first thing you encounter inside is a huge baptismal font about three or four feet square made of stove.  I always used it to steady myself as I dealt with the few steps down into the Sanctuary.  there was a narrow center aisle leading to a choir section with wooden seats like the ones I've seen in Westminster Abbey and St Paul's Cathedral.  This must have been a standard feature of churches built in that time.  I've only seen this section as a tourist but now I had the chance to actually sit in them.  I never counted how many times we worshipped in the Abbey but there were rows of wooden chairs in rows all over the room and the choir was my favorite place to sit.  The Chancel had a massive stone table.

Stone, stone, stone...........this made for awesome sound.  Deep sound bouncing all around me. The liturgy of the Iona community was on another level and most in our group bought a copy of their worship book.  I wish I had brought home a copy of their hymnal, as well.  It's possible it wasn't sold in the book store because I think I would have bought a copy.  Their music was a mixture of classic as well as simple children's tunes ("Who put the colors in the rainbow?") but made majestic sung in this place. Their hymnal had a collection of classic and new hymns and a lot of John Bell's songs.  When I looked up www.iona.org.uk  I noticed that he is one of the primary leaders.  Suffice to say the music was great.

Here is my treat for you:  I took a video before worship.  Each service started out the same:  with an announcement that we could take pictures before and after but not during worship (when all the great music was sung) but I get did this one clip of a flute.  The sounds bouncing off the stone was just awesome.  This video was taken when I was positioned in the choir about half-way.  You can see the front door as the camera moves to the left.  The Chancel is to the right. 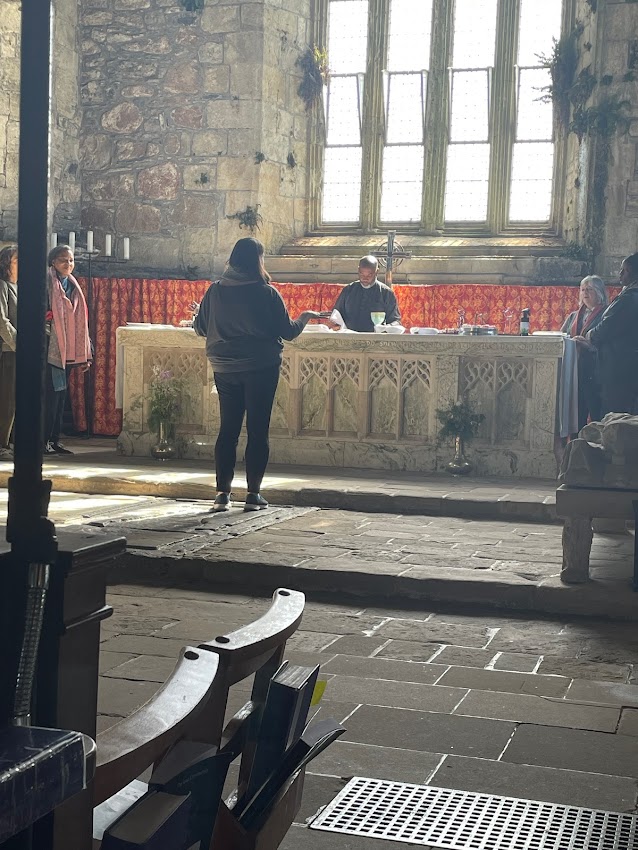 If you look closely you will see the ferns growing in the stones of the wall.  Built in floral arrangements.  In this picture they are preparing for communion that evening.  It was the only time they used the table.  We took communion twice.  This first time they had so many people they ran out of wine.  Well, yeah, they ran out of wine and folks had to drink the non-alcoholic clear juice.  So, technically they didn't run out. 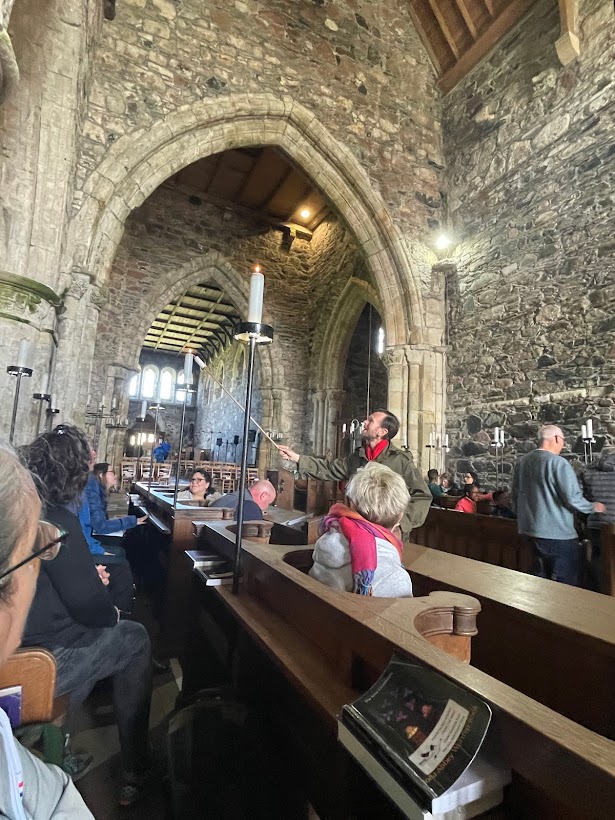 The worship was so much more than words and music.  What you can't see is the community.  There were children in worship who I assume were the children of people who have come to live and work for a year or so to study.  Each service started by lighting all the candles in the Sanctuary (the Abbey was, after all, built before electric lighting even though it has it now) but also the children have their own part in the liturgy by bringing in:
a globe to signify the earth
a tea towel to signify the community that works together
a bible to signify where love and justice come together
some stones to remind us that if we keep silent they will shout aloud
a lit candle to show that we are glad to be in God's house
Now, of course, I didn't remember all of this.  But it's in the worship book that everybody in our group bought copies of to take home.
The important part for you to remember here is how vital the children are to this community.  They had speaking roles in worship.  This is a vibrant community.
I went behind one of the panels forming a wall of sorts to find a display of some of their work.
Here is one of about six or seven bowls--they had them for AIDS, Breast Cancer, Peace, LGBT, Trans and I think there was another one that I can't remember.  Each bowl had a jar collecting coins (remembering the pound comes in a coin) for each cause. 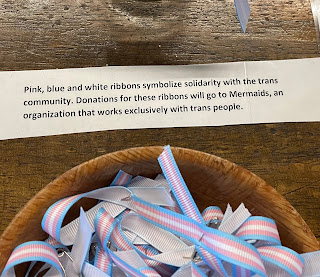 Community.  Iona was more than an old collection of stone.  It was alive and loving.  And that's what I will talk about next.
Posted by Jane at 12:15 PM