I wasn’t always a political person. Even now I don’t think of myself as a political person.  Politics is kind of something I keep in the closet for most of the time and only take out on occasion like holidays, the way one does for Halloween or July Fourth--times when a burst of emotion overcomes one like presidential elections,  inaugurations and the occasional impeachment or war.

But something happened in 1996 when I attended a special worship service at SMU to commemorate the 40th anniversary of Perkins School of Theology’s first black graduate.  To be honest I really went because Rev Cecil Williams had become the pastor of the Glide Memorial Chapel and he had brought their famous gospel choir with him for the service and I really went to hear them.  I’m a sucker for free music.

At the end of the service the congregation stood and held hands high in the air and sang “We Shall Overcome” As I stood there singing and holding the hand of the black woman next to me all I could think was, “Why haven’t I done this before?  How can I have lived through the Civil Rights Movement, college and Viet Nam and never done this the whole time?”  I felt like the biggest phony in the entire Sanctuary. The folks in the room that day were singing the song as a victory anthem and I had done nothing to earn the right to sing that song.
I vowed that day that I would do something to earn the right to sing the song.  And I have been looking for ways ever since to do that.
Now.  I have one small little drawback to becoming a person like that.
I am not a big risk taker. Marching sounded a little risky.  I watched TV in the 60’s. I knew what they did to civil rights marchers.
But in my quiet, low risk-taking way, I have spent the rest of my time looking for ways to earn the right to sing that song.
I marched in a peace march of about a half a mile back in the spring of 2007 and carried a sign.  And nothing much happened. 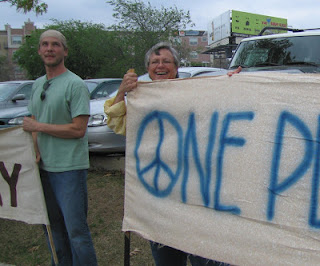 And I wrote about on my blog. Here's the link to that post. You'll have to scroll down to the post titled "Marching"
Later on I found the words of William Sloan Coffin that gave me a little more courage to step out.

The more I thought about the phrase "the courage to risk something big for something good" I started to look for something big to risk.  On the morning of my 60th birthday I set out for the Gulf Coast to stay however long God wanted to use me to help clean up after Katrina.
I’m not sure I overcame too much there but I witnessed stuff.  I watched the natural effects of what Katrina did to race relations in the south.  And I made some great friends.   I got to be there on Martin Luther King Day.  And I wrote about it.
Here's the link to that one:   That post should be the first one that pops up.

And now I’m marching again.  This time I’m taking both of my daughters and one of my granddaughters.

I'm more willing to risk now because I'm older and have less to risk.  And because I'm a little mad.
I am a baby boomer and you have to grant me allowances for that.  Making America great again means a return to the values my parents gave me--values my Daddy fought a war for and values both my parents held dear while surviving a depression and if that sounds corny so be it.
Making America great again means a return to decency and most of what Donald Trump has been tweeting on his cell phone and shouting from a microphone has not returned us to decency, it has, if anything, taken us farther and farther from it.
My newest favorite philosopher is Meryl Streep.  When my daughter wanted to know what I was going to put on my sign to carry in the March on Austin I had to take a few weeks to come up with what best expressed my views.  But Meryl said it best: “Disrespect Invites Disrespect.”
Most of my deep sadness from the loss of the election comes from all the times Trump would insult not just Clinton but all women and marginalized people.  Her reaction would be to not take the bait, she would not respond in like fashion; her only response would to quote Michelle Obama: “When they go low, we go high.” And then she would move on.
Molly Ivins’ classic quote gave us small consolation after the election: “Freedom fighters don’t always win but we’re always right.”
It’s called being Politically Correct because it’s the right way to act.  And there’s no shame in it.
So, I’m marching with a sign about respect.  I’m 69 years old going on 70.  I’ve had three different women tell me recently “I want to be just like you when I grow up.” If that’s really true, then stand back and watch.  I try to show respect to everyone I meet.  I hope you will, too.
Posted by Jane at 8:44 PM

Mighty fine. Proud of you. Sometimes wish I were you. Glad that the E's will be with you. God bless. Love, vm