I survived my annual week at Synod Youth Workshop. It was actually the easiest one I’ve ever done. And I have a great picture to show you but it's on the other computer and I'm leaving first thing in the morning to run into Dallas so I'll have to post it later.

But first I have to tell you what a wonderful Fourth of July we had out here in paradise. If you will remember, the last two or three years have been so hot and dry by July Fourth that people were afraid to set off fireworks for fear they would burn up most of the southern half of the country. Last year there was even a state-wide ban on the sale of fireworks. So, we have missed our fireworks.

This year, however, it was a very different story. Our biggest challenge this year was waiting for the rain to let up long enough for us to be able to light a fuse. But before we could do that we had to mush our way to an open field and stand in puddles of water and high grass, swatting mosquitoes delirious from a recent population explosion.

I hadn’t fully realized just how much I missed fireworks until I visited the stand this year. Standing on wooden pallets and leaning over to look at the display took me back to childhood and asking the people selling which were the best fireworks to buy. “I want something that will go up in the air and look pretty.” Or “I want something that makes a big noise.” Those magical words used only once a year: Snakes, Pop Rocks, Sparklers, Bottle Rockets (wait-that one’s been banned. Come to think of it, so have Cherry Bombs. What a loss.) Who can resist fireworks?

Of course, out here in the East Texas boondocks, we have our fireworks stand right next door to the gas station. Joe Bob’s gas station. I am not kidding.

By dusk the town seventh grade boys were already setting off firecrackers and rockets in the soggy field behind Joe Bob’s. God love ‘em. Kids just like to blow things up. We all do. And this year it was just time to blow stuff up. It was great.

However, with a granddaughter who is afraid of loud noises we had to keep it pretty tame. But I did manage to teach her to appreciate the smell of gunpowder. What an aroma! The smell of childhood………A good time was had by all.

Back to my week at Synod Youth Workshop.

The best way to describe the week is to list what we did: two worship services, five keynote addresses, nine small group meetings, two dances, a variety show, a night out on the town, a service project, and lots of music, and energizers. All of this on an average of about five hours of sleep a night. To prepare for this required two days of orientation held the weekend before the kids arrived on Monday. It’s a physically demanding week. But by some miracle I can’t explain about the only thing on me that really hurts today is my neck from balancing three pizzas on my head on a walk from one corner of the campus to the other. I may be older and “fluffier” than I was the last time I led a small group but apparently I’m in better physical condition..

The equipment I take for this week includes about three boxes filled with construction paper, poster board, pens, markers, beach balls and other craft flotsam and jetsam. I also take an ice chest, a laptop computer, two printers (separate ones for photos and text) , an iPod (with speakers), a coffee pot and, of course, my dancing chicken. I couldn’t get through the week without the dancing chicken.

It was the 50th anniversary of the event and everybody was counting to see who has been coming the longest. I’m in about third place in terms of longevity. In a group of about 40 staff this year only two other people have been coming since 1991. But I slip a couple of notches when I deduct for the 3 or 4 years I stayed home to have a grandbaby or went somewhere else like Guatemala. After deductions, I think I’ve been to this event twelve times. But twelve times is still a lot in small group leader life. Most people last only about five or six years. I think I’m addicted to the zest of being around young people. They move fast and are some of the most creative thinkers you can be around. 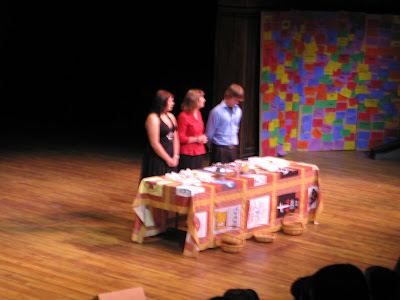 We studied the Beatitudes this time. It’s in the bible in a couple of places but the one we studied is in Matthew 5:1-11. The keynote speaker, who just happened to be my own pastor this year, used the Eugene Peterson version of the bible called The Message. This one puts the beatitudes into different wording but much easier to understand. Remember the part about “Blessed are you when men revile you and persecute you…..”

I never could get much past the “revile and persecute” part because it conjured up images of the Spanish Inquisition with torture and prison and I just couldn’t picture myself in the position of being persecuted. It has a long and complicated wording so I’ve always just skipped over that part. But this year, the same verses read:

“You’re blessed when your commitment to God provokes persecution. The persecution drives you even deeper into God’s kingdom. Not only that—count yourselves blessed every time people put you down or throw you out or speak lies about you to discredit me. What it means is that the truth is too close for comfort and they are uncomfortable. You can be glad when that happens—give a cheer, even!—for though they don’t like it, I do! And all heaven applauds. And know that you are in good company. My prophets and witnesses have always gotten into this kind of trouble.”

As I was discussing it with the kids in my group I found myself using the word “risk” instead of persecution. I asked them what was important enough to them to take a risk for. We ended up with a really good conversation about their feelings on gay rights and the war in Iraq and a bunch of other things people don’t agree on but feel strongly about.

However, at night when I finally went to bed around 1 or 2 a.m., full of adrenalin I thought more about the idea of persecution and risk. It comes in curious disguise.

Beaven and I are not risk takers. We don’t play the lottery or gamble or even pretend we care about the Dallas Cowboys anymore. We’ve always been hesitant to put bumper stickers on our cars, especially the political ones. You never know what someone will do to your car if other people don’t like your candidate. Dents in the parking lot, keys scraped across the paint of the car as someone walks past. Plus, I live in Texas. Here in Texas we always have to factor in a condition peculiar to our state: we have a number of folks who drive around with a loaded shotgun in the back window of their pickup. I’m serious here, folks.

It has its merits, sometimes. We have a lot less finger waving on the freeway because of all those shotguns in the cars. You might say we kind of police ourselves this way in Texas. But it certainly puts the damper on controversial bumper stickers.

When I asked the eight kids in our group what was important enough to them to risk their safety or security, I had to think about it myself. I don’t like it when people think bad things about me or act mean to me. Could I translate persecution into just plain old people not liking me for my beliefs?

I remembered one time somebody was trying to come up with a really bad thing to say about me. This was back in the late 60’s when civil right were still being established and a lot of people felt threatened by the idea. This woman stirred around in her bag of insults until she got to the very bottom and came up with the worst one she could think of. She called me nigger lover. I was immediately shocked and insulted, just as she intended.

However, after I thought about it, I realized what a compliment I had received; yes, an honor to be recognized as someone who loves others, even people that not everybody loves. And the more I thought about it the more proud I was of the title. In a decade past I might even have had a t-shirt printed with the title. But, of course, now you can’t get away with using the “n” word even in an instructional setting.

I’m coming to understand that’s what Jesus meant when he said I would be blessed when I was persecuted for standing up for the message he brought us. And that’s why I go to Synod Youth Workshop. I learn something new every time.

Oh, I also learned to never feed a gerbil Dr Pepper. It makes them explode.
Posted by Jane at 11:06 PM

Wow!! I do not think that I could have summarized synod as wonderfully as you have. Thanks for the words! Also, thanks for being a great snall group neighbor!! It was tons of fun!!

Jane, I am always interigued by your entries but I must say this sums up Synod the best I have ever heard. And yes the Dr. Pepper thing is true. Don't ask me how I know. :) Love your entries as always!!

You are always an inspiration!
V