I spent the day yesterday at simply the most fascinating collection of Hope Per Square Foot that I have ever witnessed. It was an event at SMU called Earth and Humanity Week. 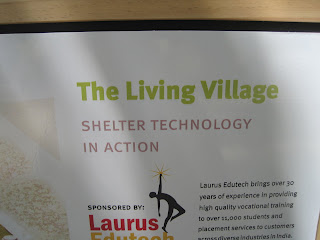 It's arranged very much like the State Fair where you walk around and visit one project or another, usually a structure designed for immediate, sustainable and/or temporary housing in the face of poverty or natural disasters. If that is a boring concept to you check out now because that’s all I’m going to talk about today. But I have pictures, though, so that might help some.

I can’t take too much credit for the adventure because I never would have heard about it except my friend Miatta Wilson sent me a heads-up. Miatta has never failed me; whether it’s a book recommendation or a plan to put on a Vacation Bible School in Guatemala (without being able to speak Spanish), her ideas are always golden. So, when she suggested that this might interest me I immediately planned to drive into Dallas for it.

Beaven already drives into Dallas every Tuesday to visit his old buddies from work. I have no idea what they do over lunch but it takes him the entire day to do it. When I combined this arrangement with the fact that parking at SMU is a nightmare on a good day, Tuesday seemed like a great day to do it. He dropped me off at the campus on his way to lunch then picked me up when he was finished.

Our timing was perfectly in sync. I had lunch with our daughter who works nearby.  We even had a “W” sighting,  We knew former president Bush was scheduled to give a speech at an unrelated event on the SMU campus that day.  He has an office in Elizabeth’s building so she’s seen the Secret Service entourage enough times by now that it was obvious to her what was going on when she saw the assembly of black SUVs. In fact, she claims it’s so obvious to her who they are that she says they really should switch to something like white Toyotas if they really wanted to travel ingognito. But I guess they don’t want that. Maybe that’s one of the perks of being the president or Oprah. Everybody knows when you’re coming.

Anyway.  So, here is my report on what I found:  I highly recommend that you go see it for yourself. Seriously. The village will be up through Friday. There is a parking garage within two blocks of the village. Look it up at www.smu.edu/News/2011/engineering-and-humanity


They had tents, yurts and even the corrugated plastic tents I lived in doing rebuilding after Hurrican Katrina. They’re designed to be easily sent post-disaster for immediate housing. There was even one igloo made of coils of sandbags. They had plenty of water purification and solar power systems to show you. There was a booth for Toms shoes and even jewelry made from trash. 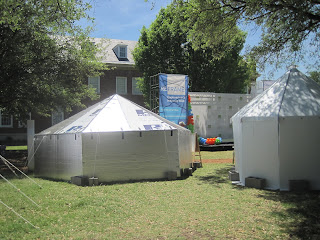 The igloo made of coiled sandbags was the most unusual looking. 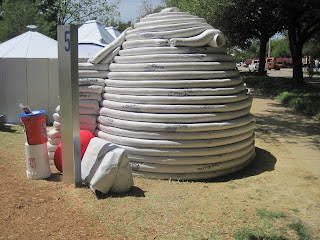 Then they had solutions to water and energy problems.  I saw about three solar paneled exhibits and a couple of water purification systems. They even had one on raising bunnies.  I wasn't totally sure if they used the bunnies for fertilizer or for dinner so I hurried past that one.  And there were a couple of tables offering jewelry and handbags made by women in poor countries--the catchiest was the display of purses and belts made from trashed pull tabs from canned drinks. Beauty made from trash. I think it may have been the greatest concentration of imagination in action ever on this campus.

After seeing so many of these exhibits I had the same thought that sneaked up on me a few years ago during a trip to Guatemala.  We were held over in El Salvador when our original flight had a few snafus. We spent a lot of time waiting at the airport that year and met a lot of mission teams like ours. Then we were put up for the night  in a hotel where we met even more missionaries. Some of these folks were going to paint churches, some to build houses and some were headed to drill water wells in such a remote site that they would have to walk up the mountain carrying everything on their backs.

Water, wells for the water, water filtration systems, cinder block houses, painting churches—airplanes in the summer are full of people going to Central America to build houses and improve the water. And I couldn’t help but ask “Haven’t we purified all the water by now? Haven’t we built every widow a house by now?”

When I went back and counted what we’ve done on our trips since the first one in 1999 I count that we painted at least four or five churches, one widow’s house built, two water treatment systems installed, and five year’s worth (well over 100 children in total) of children lifted out of a state of malnutrition. We haven’t done all the work ourselves. Some of them like the Childrens Nutrition Project we’ve paid for. But I’ve witnessed great changes in the last ten years. And that's just one small group of people.

Oh, and I forgot the houses in Mexico that our friends Damon and Annette Renaud have built. At last count I think it numbered in the hundreds.

And I didn’t include all the trips our church made to help with the rebuilding after Hurrican Katrina.

Given the plane loads of missionary tourists every summer haven’t we built everyone a house by now? After visiting SMU yesterday, the answer is clearly “no.” And we never will. Politics and weather insure that there will always be people in need of better water, nutrition and housing. We will never finish.

My favorite exhibit by far was the house they built from trashed plastic containers.

I'm not sure the pristine campus of SMU will ever be the same after this. But I don't imagine they will leave the house on the campus. 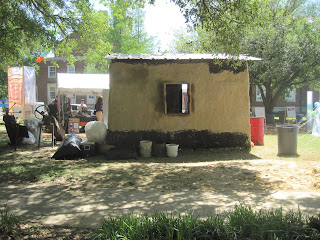 It's called the Ubuntu Blox House.  Ubuntu is an African word variously translated as "I am what I am because of who we all are."  It's the latest crunchy word and also the name of Beaven's favorite software. The genius of the house is that it is made out of plastic trash.  Harvey Lacey invented a rig that compresses the plastic into squares similar to hay bales.

Then you wire the bales together, wrap it all with chicken wire and cover that inside and out with either concrete or locally available adobe.  It solves two problems: what to do with plastic trash and how to find affordable housing.  This is literally a house made from trash.  His grandsons built one of these houses right there on the SMU campus.

The apparatus Harvey invented is free source, meaning he hasn’t patented it and anyone who wants can find the plans to build it. He designed it this way, so that anyone with welding skills in any country can go to the internet and start building. All the materials to build one of these houses can be found locally and the estimated cost to build it is $250. Their website is www.recycledplasticblockhouses.com You can also go to www.harveylacey.com to see pictures and explanations.

And this is where I met my two newest best friends:  Zac and Travis Hibdon, Harvey's grandsons. 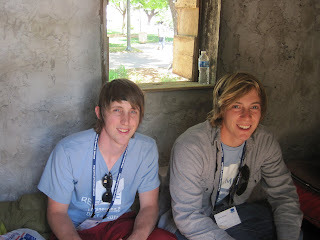 I spent a long time talking to Travis and Zac. They were full of enthusiasm and new ideas. I love to talk to kids like this. When I went into my inspirational lecture #34 (“you have nothing to tie you down, you can go anywhere and do anything”) they were already way ahead of me. So I sat down on a cot and continued to listen to them. Even in the heat of the day the house was still cool because of the thick walls.  The idea that eventually came to me was very new to me yet I could tell by their faces it was already familiar to Travis and Zac. Even though I've lived three times longer than they have, they had already thought of it.

In our zeal to equalize the world’s wealth we think we must lift the poor up to our level. Maybe all we need to do is reach down and live at their level. Maybe the trick isn’t to provide everyone in the world with a 3,000 square foot house. Maybe the trick is for me to be happy living in an adobe house made from trash that cost $250. Maybe then we can afford the time and money to purify all the water, feed all the children and protect them from disease. Or maybe we could meet in the middle.


I’ve written enough to get myself in trouble for talking like a communist. Gotta go. Think about it. It’s been done before. Read Acts 4:32.  I am what I am because of who we all are.
Posted by Jane at 11:15 AM

Email ThisBlogThis!Share to TwitterShare to FacebookShare to Pinterest
Labels: Ubuntu

Jane, I am a St Louis fan of Harvey and the Ubuntu Blox. I haven't met his grandsons yet.

The big challenge is finding enough used plastic bags and styrofoam to serve as raw material for the blox. These are the plastics recycling programs don't want. It's a perfect match; we just have to get the bride to the groom.

I see that you work with youth groups. Maybe you get them to ask their neighbors to start saving bags and styrofoam. I plan to send some from STL, because I want to contribute material for a Ubuntu Blox House!

You may be eligible for a new solar program.
Click here to find out if you qualify now!