Living Off the Grid

Every year at this time Beaven goes to some kind of Ham Radio convention except I like to call it his Nerd Convention. Ham radios started out as guys building their own radios back when radios were first invented. What I can’t figure out is where did it get the name “Ham?” When we built a small separate building that I wanted to use for overnight guests Beaven put all his radio equipment in there and for a while we called it his Ham Shack. But folks thought this meant he was smoking hams there and we had to realize that some of Beaven’s technology isn’t exactly mainstream.

Beaven's been going to these conventions four or five years now and I’ve come to look forward to them because it gives me one of the benefits of widowhood (having the house to myself) without the penalties (I know he’s coming back.) So I usually give me a big ole party. But this year I went to visit my good friend Linda Terpstra. 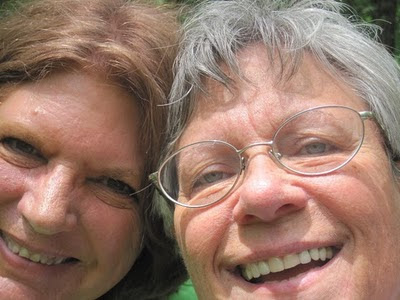 Linda is the chick who got me started going to Guatemala on mission trips. It’s a real bonding experience to share a bathroom in an undeveloped country at the same time you both have a case of tourista. But the added benefit to our relationship is that Linda and I also share a love for experiencing God’s creation in quiet ways. Not many women will stop chattering once in a while and just let the birds and the wind in the trees speak. We came up with a list of about ten ladies who were of similar nature. No chatterboxes need apply.

Linda and her husband are building a cabin in southeastern Oklahoma and last week was the perfect time to visit. While Beaven was off to his convention she sent Denny to their house in Texas and announced a Star Gazing weekend for similarly inclined friends. By a stroke of serendipity Beaven’s convention was during the dark of the moon and the stars would have the sky to themselves. Then, one by one the original guest list wilted down to just me. I packed my star map,several books and a pair of binoculars and went anyway. Periodically, I sent the ones back home pictures to rub it in with what they were missing.

Linda and Denny are building this house with their own hands. They are like that. They built the house they live in now. Here’s what makes their house a destination in itself, a veritable wonder: because they live in the wilderness (literally across the street from the Ouachita National Forrest) there are no utilities available. None. Zero. The house is totally off the grid. They have solar panels for electricity and a special electric refrigerator designed for minimal power usage. She’s got an iPhone and air card for her laptop. And it turns out living on a mountain provides a great signal. They use propane for heat and cooking. Linda said it was a real challenge to find a gas stove that didn't also have an electric ignition for the burners. They have a well for water and septic tank for sewage. High windows throughout the house provide enough light that they seldom need to use electrical lights. And their living quarters are on the second floor so it’s a lot like living in a tree house.

My initial introduction to living off the grid was Linda announcing that she might follow me around like a mother hen and turn lights off if I forget. She kept an eye on a panel near the floor in the living room that gave her the status of their electricity. One color tells her the batteries were charging and another tells her they are discharging. The goal during the day was simply to not use any electricity. This was easy enough to do in the day when you had sunlight for reading. At night the candles gave enough light to find the bathroom and it turns out you really don’t need much light to pee. It’s a gentle lifestyle and I found myself talking softer. Mostly because it’s must more peaceful but also because I didn’t want to miss a single sound God provided us for entertainment.

The only time Linda and I disagreed on the benefits of living in the bosom of God was when I heard the Chuck Will’s Widow tuning up for the evening. Chuck’s Widow has a very distinctive call and will sing through the night. It was the first bird call I learned and it kind of summons me to the day’s end. I find the bird’s call supremely relaxing but it annoys the hell out of Linda. She hates that the bird never stops all through the night. Other than that single lapse of compassion she and Denny live in harmony with nature.

She took me to their large pond at dusk to feed the fish. Her husband is even more in love with nature than she is. He probably likes the sound of Chuck’s Widow. And he has the fish trained to come when he feeds them. I had never seen monsters like their catfish. She threw out floating catfish food for them and they came to the surface with their whiskers flapping around in the air while they gobbled up kernels of the food with their huge gaping mouths. The bass get chopped up hotdogs or left-over pork chops. It turns out bass are carnivores. Fish? Who knew?

Then she showed me their garden and we compared notes. She is one of those sturdy folks who have the stamina to grow asparagus. The last time I checked into it, growing asparagus requires a three year commitment before you can actually eat the stuff. I don't have that much confidence. However, I do plant potatoes and onions and Linda doesn’t. Her tomatoes are ahead of mine, probably because she knows more about composting than I do. She even has a thermometer stuck in the pile to make sure it’s “cooking.”

We drove the Talimena route that goes through Arkansas and Oklahoma. Then we hiked a little through the Ouachita National Forest. 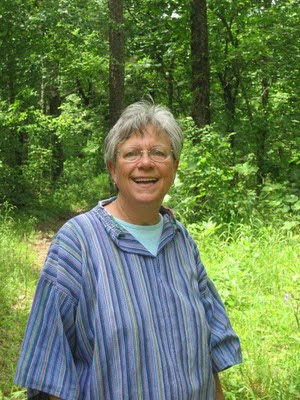 At the end of the day we sat on under the covered deck with a steady rain falling through the forest. She had a free standing fire pan where we built a small fire out of pine and cedar. That had a surreal feeling to it—sitting outdoors around a fire in the rain. It reminded me of the time I took a hot shower while standing on ice. 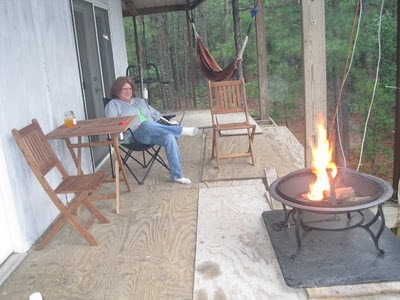 I slept like a log both nights even the night it was cold enough to make me shiver until I put on a sweatshirt. Summer hasn’t quite arrived in Oklahoma. She put together a huge salad one night to make up for the fact that the rest of our time we ate a box of chocolates, a carton of ice cream and a couple of bags of potato chips between us.

On Thursday evening, with all the electricity we had saved by not using lights, we splurged on using the TV to watch a DVD of the Taize community in France. And if you’ve never heard of them do yourself a favor and check it out:

I'm afraid you'll have to google it yourself, the link doesn't seem to work.

I came home with one more night of solo living before Beaven returned. I tried keeping the electricity off as much as I could. I unplugged everything, remembering how Linda’s usage plummeted just by unplugging the TV set. Some appliances draw an enormous amount of power even when they’re turned off. I opened the windows. Aside from the refrigerator cycling on and off, it was just the dark night and me. And the Chuck Will’s Widow. All was well with my soul.
Posted by Jane at 9:47 AM

There's a chance you're eligible for a new solar energy rebate program.
Discover if you are qualified now!