Now that I've explained what I'm doing as a Wild Goose Chase by introducing the Goose as the Holy Spirit I know you are expecting a hither and yon, break neck speed race around Scotland, maybe squawking once on a while.  Let me introduce another kind of Jane's Journey (because there are many and have different names for each.)

Our leader has also described our trip as a pilgrimage.  And I'm sure he will elaborate in the coming days in ways that I'll be able to share with you.  For now, I have words of my own.

For my own pilgrimage you need to know that I get lost easily.

I was tested for this once and scored solidly that I literally have no sense of direction.  I can compensate for it with maps and electronic devices.  But I'm so handicapped I sometimes have trouble even reading the maps.  Sometimes the best method is actually to think of what my gut tells me to do and then do the opposite.  That part has been known to work as well as anything else.

So, when I set out in one of the largest cities in the world  alone, it was a true faith journey.

I had an Oyster card which is an all-purpose transportation pass, good for the tube and the bus and even some trains.  I had a credit card and my phone.  And that's really all I needed.

I have never been one to carry a purse.  A purse is only something to get stolen.  It hangs around loosely stuffed full of useless things like old Kleenex and gum wrappers. My mother-in-law had her purse stolen in the grocery store.  She had such a headache replacing all the things inside her wallet I haven't carried a purse since. They're going to have to stick their hands inside my pocket and get close to my body parts to get my stuff. That's enough to scare off most robbers.

I once went out in Rome in search of the church of San Pietro in Vincoli with only a subway card and a map.  I forgot my wallet so I had no money and no ID.  I found my way to my destination after getting lost about five times.  The subway card got me there and back.  I never needed money.  I never needed to speak to anyone which was dandy because I can't speak Italian.  I popped in to see the statue I was looking for, took its picture, said a quick prayer and went back to the hotel. These things are complicated only if you make them so.

Today, I figured out what to call these events:  they are "Confidence Building Events."  And, because I survived that day in Rome I knew I could wander around London by myself.

It's all a Pilgrimage.

I checked the dictionary to make sure I wasn't too far off base here.  The consensus being pretty generic right now, is that a pilgrimage is a special journey to a special place.

Today I had a special place in mind the minute I woke up.  I've had a spot in London I've wanted to visit for a long time but couldn't get anyone interested to accompany me. It goes back to my first trip here when I noticed a guy on our Rick Steves tour bus looking at a map.  Then I over heard him telling the story that has now become so familiar to me that I could almost explain it better myself:

As an ancient major city, London has had many outbreaks of contagious diseases that wiped out significant parts of their population.  The most popular culprit has always been the bubonic plague, spread by rats.  Specifically, the fleas on the rats.  The Great Fire of London in 1666 stopped a major plague when it coincidentally killed all the rats. This must have scared all the fleas to death because they never had another major bubonic plague after that.

But they did have cholera. And in 1854 it was killing everyone.  And that's where the map comes in and my own pilgrimage.  In those days the best scientific minds thought that disease was spread by the air.  They hadn't come up with a "six feet of distance" rule but it wasn't for lack of trying.  The Italians had elaborate leather masks made to narrow the intake of air into your face.  It looked like a combination of bird's beak and funnel.

Enter Dr. John Snow, an anesthetist in London who thought the culprit was in the water.  He did a bit of medical sleuthing and came up with a map of every death from cholera.  Then he did some research on where people who died had gotten the water they drank.  Not everyone drank the water from the well nearest their own house--some preferred specific wells because they "tasted better." Once he assembled all this exhaustive research, he overlaid the two maps and BINGO there was one specific well that the majority of deaths had in common.

John Snow went to the city fathers and, after a battle to get them to believe him, they agreed to remove the handle from that well's pump, disabling the citizens' ability to drink from that well.

Jane.  Jane.  Jane, what in the world does any of this have to do with anything?  What kind of a Wild Goose Chase have you led us all on?

It's not what you're thinking.  This is a Pilgrimage.  It's a special journey to a special place.

I've been fascinated with plagues for years now and I can't get it out of my system.  Don't know why but I just had to go see the famous spot where this all happened.

Because they have preserved it, you know.  It's famous.  Known as The Broad Street Pump, it's not actually on Broad Street now.  For some reason, the street has been re-named Broadwick.  No big deal.  I found it easily enough on my phone app.  It only required a short walk, a ride on the tube, another short walk, and another bus ride, then a third walk.  Turn right, left right, left.  Hold the phone upside down to orient what direction I'm supposed to walk, that kind of thing. Did you know sometimes you don't get a cell signal in the tube system? Sometimes you do but you can't depend on it. And without the cell phone I was flying blind.  I might as well have been in Alaska.

But I eventually found it. 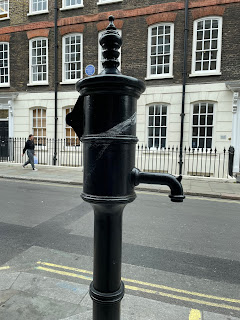 And, lo and behold, there is a handy public house right in front of the pump.  Called..... wait for it:.... the John Snow Pub.  I got an order of Fish and Chips and was ready to go. 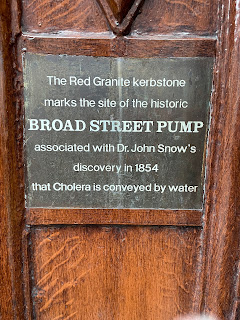 I got lost going back to the hotel, too.

But while I was eating I figured something out. The reason it was a true pilgrimage.  A special place for a special reason.

My father was a doctor.  His specialty listed on his business cards and on the sign outside his office and everywhere else said "Internal Medicine and Diagnosis." It wasn't until about five years ago that I realized I've never heard one single doctor on earth describe themselves  as having a speciality of "diagnosis." I think I may have asked him one time about what that meant and he told me that if another doctor couldn't figure out what was wrong with someone they could send them to him and he could figure it out. Mind you, this was back in the days when about the most advanced testing equipment was the electrocardiogram and some blood work.

My father would have been fascinated by the forensic medicine of today. As I sat there in the John Snow Pub I realized that the apple hadn't fallen too far from the tree and my DNA had drawn me to pay homage to the spot in London where somebody had figured out how to stop a plague.

As I headed back to the hotel I wondered what new adventure I can now put on my bucket list. Because a true Stuart knows that anytime you cross something off your bucket list you need to add something else.  I think Uncle Henry made the mistake of completing his list and had to start a whole new one. I intend to just keep a running tab.

Here's what I think: I don't think a pilgrimage really ends.  If life with our Creator is the goal then it won't.

Thanks for sharing. I love to read your work.