This post was supposed to be about all the stuff I saw at the British Museum but the fact is it took me so long to get there (walking, tube, walking, yada, yada--and I didn't actually get lost this time even.......it's just that I'm old and my feet hurt) and the stairs to this place sometimes go nowhere.  I am not kidding.  Just try finding Room 41.  I dare you. I didn't even make my usual homage to the Rosetta Stone.

But I did have the MOST interesting lunch and that's what I want to tell you about but I knew if I titled this "Lunch" you wouldn't read it.

I think I had lunch with somebody famous but I don't know who he was.  I never asked his name.

I got in line at the restaurant and it was kind of busy.  There was the usual quiet grumbling about waiting.  I noticed everyone was a couple except there seemed to be one guy right behind me in line who looked kind of disheveled....hair needed a shampoo and cut.  Elderly. Which is to say, my age.  I thought to myself at the time, "If this place gets crowded and they put us at communal tables, I hope they don't stick me with that guy."  Which is exactly what happened.  Because we all know that God hears everything we're thinking and has a sense of humor.

So here we are at this big table with about ten other people and the old guy is right across from me. Like two feet from my nose. Eventually, we can't ignore each other and start talking.  It turns out he has a membership to the museum and just pops in whenever he is in the mood to see the special exhibits. He's here today to see the Stonehenge exhibit.  So we talk about Stonehenge for a while. I know enough about Stonehenge to know it's not the best example of neolithic stone circles. I'm not an expert but I did read In Search of Stones a couple of times.

He turns out to be an interesting sort of fellow.  One subject leads to another.  And he ends up to be fascinating.  We get to politics and Trump and Brexit.  The girls on my right chime in because they're from California and they start foaming at the mouth at U.S. politics and all four of us agree that the world, including Britain seems to have gone mad.

Eventually, the California girls have to leave.  I wave them goodbye, reminding them to be sure to vote.

The old guy continues talking about Brexit and gets to border issues with Scotland and Ireland and the possibility of Scotland declaring independence.  I realize that I am getting an education far beyond my abilities to understand or appreciate what he is talking about.  Like, I don't know enough to even start understanding what I don't know about what he's telling me.  I figure him to be some sort of university professor.

So I ask him what he did for a living before he stopped doing it. Trying to find a nice way to ask about retirement.  He got this funny little twist to his mouth, like a smile that told me there was something I didn't know.  He said something vague like he was a foreign information officer for the British Broadcasting System.

It didn't really register. And we continued talking.

They messed up his order and we ended up sitting there for over an hour waiting for his food to even arrive.  This wasn't my first time to observe the incredible patience the Brits can muster when waiting for food in a restaurant.  I've seen it twice before.  Either they are used to horrible service or they really are that polite.

My education continued while I asked him about what might happen in the inconceivable event the queen dies. That conversation was far shorter, however, than the ones that touched on Russia or Ukraine where he was clearly more well-versed. He kept getting deeper into history of that part of the world and I regretted not knowing enough to keep up with his understanding of the political background. I was getting an education far beyond my limited ability to absorb his extensive knowledge.

He was starting to look vaguely familiar but one of the reasons I get lost so easily when I explain my testing and diagnosis is that I have "poor design memory."  This includes maps but also faces.  It could also be that I had been sitting at a table 2 feet across from him for an hour. By this time he was a familiar face.

Eventually I was stuffed with tea, scones, clotted cream and all the information I could handle on foreign affairs. I had just spent one of the most fascinating hours of my life yet I felt it was a waste because I didn't know enough to appreciate the nuggets of knowledge I had right in front of me.

I bid him goodbye and told him to tell the Queen "Hi" for me.  He got that funny little look on his face again and said, "Oh, I'm afraid the Queen doesn't think too highly of me."

And that's all I will ever know of my mysterious friend. I haven't a clue what he meant and probably never will. 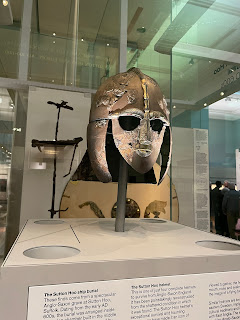 And, yes, the dude totally looks like he's wearing sunglasses.

But, actually, that's just an empty spot in the armor.

But it's there.  It's physical  things we can see and hold and touch and carbon date to prove it's as old as we think it is.  But if we think we know the real story behind the artifacts, we're really just making educated guesses.

Some things are OK left as mysteries. I had a great lunch with a really cool man.  I have no idea who he was.  And that's OK. It has to be, doesn't it?