Of course all visits to Paris must include the best, finest, largest art museum in the world: the Louvre.  We knew this.  So we prepared.  We bought a Paris Museum Pass.  This let us "skip the line" in all the other museums, some of which were really, really long.  It felt real good.  We just sailed past all the other suckers who weren't as savvy as we are and walked right into Saint Chapelle, Musee d'Orsay, Napoleon's Tomb, etc.. etc.....

The busiest month of the year even Parisiennes go on vacation.  And probably half of them are at the Louvre. And, even with the Museum Pass you gotta make reservations to get into the Louvre.

So we did. The first available entry time was 12:30 of our last day in town.

Bright and early Thursday morning we got up and on the Metro and out to the museum.  We loitered about in town a bit.  We had plenty of time.  It turns out the regular city bus #69 has a reputation for passing a lot of tourist sights and for the price of just an ordinary bus ride you get to see what the $30 tourist rides show you. Then we stopped for a leisurely lunch in the courtyard at the Louvre.  It overlooks the vast staging area for the massive lines.  We could tell it would be packed by just looking at the lines.

There were two lines.  The longest was for the unlucky ones who had not bought tickets ahead.  That line looked like it took about an hour or two to complete.  Our Lucky Line for Special People with the Museum Pass zipped us through without even stopping when 12:30 arrived.

However, it was a false sense of specialness.  Once inside everything came to a dead halt. The building was packed to near gridlock. I've been in some crowded places:  two come to mind that I won't bore you with here but this one came close to being elbow to asscheeks. 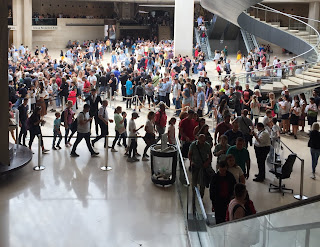 The Louvre does its best.  They probably consulted the Disney people.  I heard that one technique would be to limit our time in  front of the Mona Lisa to 20 seconds per person.  A tour guide I know timed it on a video.  And, for somebody who is not in grad school for art history that's probably enough time.  Keep the line moving, folks.

My first need was a bathroom and I spent over 30 minutes in line. I heard talk of "area 51."  OK, maybe that was me but it made sense.  I found out later that some women did rebel and barged into the men's room. I enjoyed Beaven's account of the expressions on the mens' faces when this happened.

By this time Beaven had been standing long enough on his bad leg that he needed to rest. (Guess what girls:  Gramps has developed a "bad" leg.  He didn't have one when he left home but he does now.)  So we went in search of a place to sit and drink a Coke before we started our art loving in earnest.  The first Cafe we found had not just a line to get into but I spotted people littered around outside sitting on the floor. eating and drinking. The next one we found was a Starbucks that was just as crowded and doesn't even sell Cokes.

By this time we had spent an hour inside the Louvre without seeing any actual art.

And I was starting to notice how crowded the place was.  I'm a firm believer that the only real enemy in travel is getting sick.  And this is from someone who has had her pocket picked, her billfold stolen and lost her phone.  Things can be replaced.  But if you feel miserable you lose the experiences of enjoying yourself.  And the Louvre was starting to look like the common cold on steroids with a few cases of Ebola thrown in for good measure. I usually start a regime of Vitamin C a week before travel and continue it during and the week after I'm home mostly just because of the airplane germs.  There wasn't enough Purell on the planet to combat what I was going to pick up in this place.

I decided we might need one of those audio guides to tell us what we were seeing after we found ourselves in a room that was itself a work of "art" in that they just scrapped down to underneath the building and found some old ruins of the original city wall and declared that art history. This place was starting to look overwhelming. It was older than Jesus Christ.

So, we went to the audio guide line and got in line.  Three Chinese teenagers broke in front of me but I let it pass for international well-being even though this isn't even my country.  But when I finally got to the human I needed to talk to he told me I needed to have a ticket for the audio guide first and needed to go to the "other" place to pay and get a "ticket" then come back to get an actual audio guide.

Let me pause for a minute and explain something about Beaven to you. I married an introvert.  I also gave birth to two introverts.  One of whom then gave birth to two more.  This means that I am the only extrovert in our entire family.  I usually love crowds.  I revel in them.  A crowd like we faced at the Louvre this day was an occasion for me to party with 1,000 new friends.  Let's all see how many different languages we can listen to and try to understand at once!  Let's see how many people we can talk to without knowing their language!

But what good is 50 years of marriage if you can't reach a point where you come to understand what the other person in the marriage is thinking or feeling?

It was at that moment I realized that I did not have a 50th anniversary gift for my husband.  My rock.  The guy who can guide me to any point on the planet when I can't find my way out of the garage.  Who can forgive my flightiness with the patience of a saint.  But a quiet man who hates crowds. And I thought of the perfect gift right there on the spot.

There was a flicker of hope in his eyes.

"Are you sure?  I know how much this means to you."

"Look around us.  This is stupid.  No art is worth this."

And so we left.  We didn't even go to the gift shop.  Not even a refrigerator magnet.

We walked out.  Got on the Metro and never looked back. And it was marvelous.

The trip wasn't a total loss.  I have come up with a list of four things to make the Louvre a better Museum.  I had a lot of time to think while I was waiting in line at the restroom. You can sent the Nobel Prize to my house.  If I'm expected to attend the ceremonies I'll have to find someone to go with me besides my family of introverts.


Four Things to Improve the Louvre

1.  Get rid of the men.
Don't allow men inside.  This will immediately eliminate not only half of the people but double the available restrooms.  Men don't usually want to visit art museums anyway, if they're honest.

2.  Get rid of anyone under 30.
They are a nuisance.  They move too fast and too much.  They laugh and talk too loud.  They don't appreciate art any more than the men do. The walk around talking on their phones and wearing clothes ripped at the knees on purpose. It's a waste of floor space to let them in.

3.  Get rid of the marble floors.  Replace them with soft carpet.  Once the building is inhabited by older women we will tell you our feet hurt. It would cut down on noise, too.

4.  Get rid of the Mona Lisa
OK, you don't have to get rid of her, just give her a separate building.  Half of the people who come to the Louvre are here just to see her.  Moving her to another building will cut the crowd in half again.  She's not really that great anyway.  She was at da Vinci's bedside when he died which tells you he wasn't finished painting her.  Even he wasn't totally happy with the painting.  It's too dark.

I have now cut the crowd into less than one-fourth of the size with only one less painting.  Same amount of art, less crowded. The only expense would be new flooring.