I have had my pocket picked in all the great cities.

And when I wasn’t a victim I managed to just plain old lose stuff through my own stupidity.

The classic was losing my camera by way of a roomy pocket and a bright blue Columbia jacket and pink ball cap that all but screamed "Stupid Gringa" in the most crowded building I’ve ever been in at the Guatemala State Fair.

The last time we visited Napoleon’s tomb in Paris I fell in love with the stairs and spent most of my time photographing them. Followed by leaving the phone containing the snaps on the counter when we bought Metro tickets. By the time I realized my mistake I didn’t think there was much point in going back to see if the phone was still there. The photos were lost.

So, the first thing I wanted to do in Paris was get a re-do on my Napoleon pictures.

The guy does not disappoint.  I understand he’s inside about six coffins. 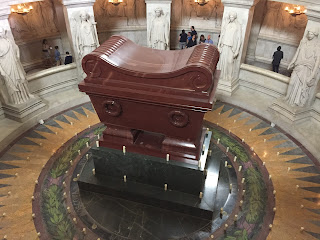 As I looked around I realized there’s not an inch of wood anywhere to be seen the entire building is stone. Most likely all marble. But remembering it was the stairs I came to see I made sure to get those snaps.  Clearly this Napoleon fellow was important. 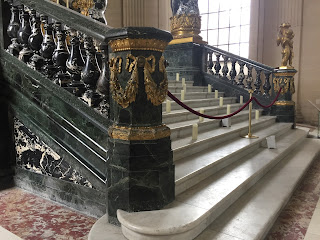 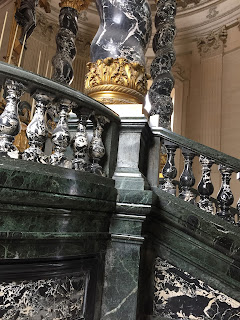 I love stairs.  I love the way they look. I love the feel of walking them. OK- maybe not so much for myself now that I’ve gotten older but I love the graceful action of a young person walking up stairs. I love that scene in Gone with the Wind when Rhett Butler grabs Scarlett O’Hara and carries her upstairs. I know how to build a basic stair and know the formula of 6 inches of rise for 7 inches of run.

We just left Amsterdam where those people don’t seem to grasp that concept or they use their available space under another somewhat twisted manner because they use something like 9 inches rise and 3 inches run which is a lot more like a ladder than anything you would carry a woman up to ravish her. No-- they guys who built Napoleon’s tomb knew what they were doing. These steps were made for ball gowns and gliding gracefully up and down.

I love the ancient stone steps that have been ground down by centuries of feet carrying just enough sand crystals to add their own slight swipe of sanding. I’ve climbed the tower in Pisa made of the same soft marble Michaelangelo used to carve the David. By my definition I think this qualifies me to say that I have carved Carrera marble, however microscopically.

The other thing stairs do for me lately is remind me my knees and lungs still work.

Seriously. I’m at the age where my list of dear friends who have left me for a better life with the angels is growing and I miss them. And I always think of Linda McCormick when I climb stairs. She had both knees replaced and by the time her knees got better her lungs gave out and finally it all went south for her.  I realize with each 6 inch rise that I have been given a gift that Linda is missing. I may huff and puff sometimes but I still appreciate the mere fact that I’m here. 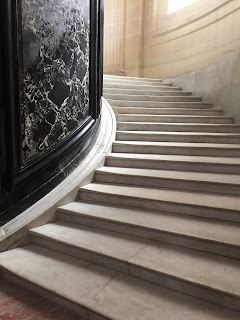