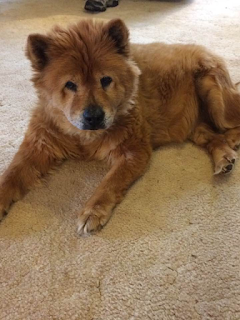 Her full name was really Little Orphan Annie because she came to us as an orphan.

About 12 years ago Beaven and I were taking our walk on the back roads around our house when we passed a recently dead dog in a pasture.  She was a beautiful golden retriever but there wasn't anything we could do for her and on these roads there was no way to know who she belonged to, if anyone. The following day we took the same route and found the dog's puppy had joined her body and was guarding her.  And the puppy wouldn't leave her mother's side.

It was also Easter weekend. And the whole family was gathering.  And it was starting to rain.

So the rest of the next day was spent trying to entice the orphan puppy to trust us enough to leave her mother's body and come home with us.  Emily set out food for her.  Beaven bought a trap. Our entire Saturday was consumed with trying to get the puppy to come home with us.  By Saturday afternoon Emily and the girls had to go home and we gave up for the day.  Sunday morning, Easter, I gave it another try.  I crawled through the barbed wire fence to the pasture and sat by the mother's body.  Petting the mother's long-dead body to gain the puppy's trust. I sat in the soft rain and talked a little about Easter and resurrection and how that wasn't going to happen here and her best option was to come with me.  She would come only so close but no closer. Finally, I hit upon a solution.  We had Girlfriend, a dog who had come to us as a "dumped" dog who we could tell had recently nursed a litter of pups.  She was a puppy-less mother.  And here we had a motherless puppy.  They were a perfect match.  I went home, got Girlfriend on a leash and took her down the road to  meet our Little Orphan Annie.

It was Girlfriend who quietly took over the situation. With a few gentle wags of her tail and nuzzles of her nose she reassured Annie that we could be trusted.  I led them both home, Annie following Girlfriend.

Annie eventually became Emily's dog. She was part Chow and strong and stout and fiercely protective.  She lay outside Emily's bedroom door every night to guard her and her two girls.

Time passes the way it does and the inevitable happened.  And tonight for the first time in a long time she won't be there outside Emily's door.  She will be with her mother. And with Girlfriend. And there will be some sad folks here missing her.

I got word of Annie's passing this morning while I was out of town at a retreat and about to go to worship. A few minutes later we gathered in a large room in a circle for communion. The worship leader introduced the service and said that this might be a picture of what eternity might look like.  As I looked around the circle I could picture some of my departed friends sitting there in the room with me sharing communion with us.  Then I found myself picturing everyone with their departed pets--cats on their laps and dogs at their feet. A few birds perched on their shoulders.  It was a busy scene.  Busy and happy.

And it was such a natural thought.  Sure!  If I'm going to get to go to heaven --the kind of heaven I want to go to will have all my pets there.  Otherwise, it won't be heaven.  And Annie will be there. And she won't be an orphan anymore.
Posted by Jane at 8:39 PM