Chaos Doesn't Give Up. Neither Does Hope

I had a great lunch today with an old college friend.  After she left I went out to my labyrinth field to begin laying out this year's new and improved labyrinth.  The day was gorgeous with clear blue skies and the air was still.  It wasn't too hot or too cool or too windy.  Actually, it was perfect.

But when I got in the house I found out on Facebook that there had been tornadoes in New Orleans while we were enjoying our lunch.  And, worst of all, it had hit somewhere near and dear to my heart--my home for several months--the very building I had lived in while I served there during the recovery from Hurricane Katrina.  Facebook friends from my days at the Presbyterian Disaster Assistance posted a video of the Volunteer Village where I served as Village Manager in New Orleans in 2008.  One of the tornadoes that hit the town today pretty much destroyed the building.  An AmeriCorps team member sent out a video and it looks bad. The second floor is gone.

There's great sadness at its loss because Olive Tree was everyone's favorite.  It was the nicest of all the volunteer villages.  While the other villages were basically vinyl tents this camp was a compound of two brick buildings; the former church sanctuary that we used for a dining hall and offices and the education building with individual classrooms that we used for dorm rooms.  It was clean and easy to keep clean, warm and dry. As someone who battled mildew in Mississippi I can tell you this was a major deal.  There is also irony here because of all the villages it was the sturdiest.  No one ever worried about the wind blowing it away the way we did the other camps.

I haven't figured out how to post a Facebook video here on my blog and if you know how, please let me know.  I do have this one photo I can show you of the shower trailer that breaks my heart because I watched a Presbyterian church from Kilmarnock, Virginia put the finishing touches on installing it.  I remember it brand new. 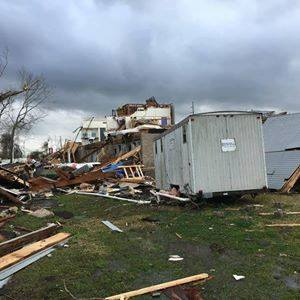 I'm still kind of in shock at seeing this building torn to pieces because it brings back so many memories.

My favorite memory is of the party Project Homecoming had in our dining hall on the night of the third anniversary of Katrina.  We had all heard that there was another hurricane on its way to NOLA.  It was predicted to be Katrina's twin.  It was named Gustav and we were under a mandatory evacuation order.  Everybody needed to get home to pack up and leave town.  But for this evening, for this 3-year celebration at least, we were going to party. We ate each other's home cooking like there was no tomorrow because for all we knew there wasn't.  We had a jazz band play the Second Line and we danced. We waved our napkins and shrugged around the room, daring anything to ruin our good mood.  We hugged and told each other we loved them.  Our guests went home to pack up their homes.  Then we packed up the camp--copiers, computers, refrigerators, freezers, files and phones.  I tied down the port-a-potties, locked the shower trailer and turned off the gas.  And drove north not knowing if I would ever see the building again.

We would return in three weeks to find the building untouched.

Today the building's luck ran out.  Judging from the video I saw it looks pretty much destroyed.  The second floor looks gone.  The picture window of the lounge where I watched TV for news of Hurricane Gustav is broken.  The courtyard with signs of everyone's hometown is littered with debris.  I couldn't see the shower trailer in the video but I don't have much hope for it judging from the debris I could see coming from the storage building.  I saw the camp gate mangled into a pretzel and remembered locking it every night. I still remember the combination.  I guess it doesn't matter now.  I looked at the lawn and remembered mowing it, knowing all the potholes to avoid in the turf.

I knew that camp.  It had been my home.  And now it was ruined.

The building was still being used to house volunteers when the tornado hit today.  I stayed there last year when I went back for the tenth anniversary of Katrina.  I slept in the bunk beds they provided for the volunteers Project Homecoming hosts who continue to go into the community to rebuild New Orleans.

After Presbyterian Disaster Assistance transferred their work over to Project Homecoming they partnered with AmeriCorps and both agencies used the building to house volunteers who would come from all over the United States to work on houses.

Yes, we are still rebuilding New Orleans from the damage Hurricane Katrina caused.  The storm was that bad.  The volunteers are that good.

The motto of Presbyterian Disaster Assistance is "Out of Chaos, Hope."  I know that Hope never gives up.  And apparently, neither does Chaos.

I also know the volunteers.  I was a volunteer before I was a village manager.  The volunteers will be there as soon as they get the approval to help clean up the camp.  They will stay in hotels when the camp isn't available.  And they will continue to come to New Orleans. They love the city.  The volunteers rebuilding New Orleans won't stop just because a disaster recovery camp is damaged.

Especially now.  Because now there is even more work ahead.  Ours wasn't the only building damaged.

Chaos doesn't give up.  Neither does Hope.

Here's the link to volunteer.   PDA  You might need to give them a while to get organized before they are able to accommodate volunteers.  And if you can't go in person, please consider a financial gift.  This stuff ain't cheap.

In the meantime, here's a picture that Sue La Rue sent me last summer.  She loves her New Orleans flowers and I thought of her today.  A white flower of Hope. 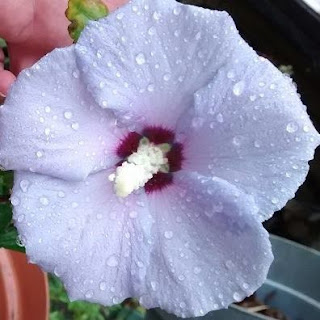