Nativity scenes are so much more than cute Christmas decorations.  One of the many things I learned in travel was that the stained glass windows in the beautiful cathedrals of Europe were actually the way to relate scripture to the illiterate who neither owned bibles nor could read them. Likewise, the manger scene tells us the story of who was at Jesus' birth.  We have Mary and Joseph and the baby, of course.  But, Oh!, so many visitors!  Cattle to share their quarters. Angels to announce the birth to the shepherd in the fields and those shepherds who dropped everything and came, plus their sheep.  Wisemen from afar following the star plus the camels they rode in on. And finally the angels to announce the birth. It was a busy birthplace.

In this birthplace we learn a lot about God and who God picks to announce this birth to. The high and the low: wisemen and shepherds.

When our granddaughters arrived for the week I had them get out the decorations and told them to decorate the house however they chose. I told them to take down all the regular photos and knickknacks and replace it all with Christmas stuff.  I made a couple of executive decisions:  two pieces needed to go in protected corners away from danger.  We have one 100-year old toy horse that was my Daddy's when he was a little boy and I have a special angel that I wanted close by my bed at night. But the rest I let them place wherever they wanted.

They put the nativity scene on the credenza under the TV in the middle of the living room.  This would be a great spot except it competes for attention with Murphy our cantankerous older cat.  This is also the spot where Murphy like to nap in the evenings.  Murphy generally makes his own rules and if Murphy needs a little more room he is apt to simply swipe things out of the way with a flick of his paw and little regard to whom he might offend, even if it might be the infant Messiah. Murphy does not have a conscious when it comes to things like this. So, right off the bat we moved Jesus and his bunch over to the side to give Murphy more room.

And still I worried.  Sarah told me there wouldn't be a problem and she picked up the figure of Cookie Monster and moved him right by Baby Jesus.  "I'll just move Cookie Monster over here to protect him.  Cookie Monster is very protective of Jesus." 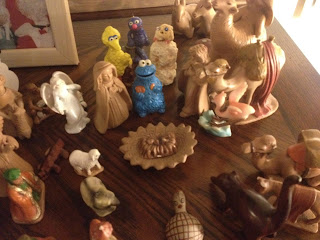 She's not the first person in our family to give new meaning to the nativity.  If you look closer you will see a white blob behind Cookie Monster.  That's the snowman Sarah's mother, Emily, made in pre-school when she was about three or four.  Years later when I put him into the nativity the now-adult Emily was aghast.  "Snowmen don't belong in nativity scenes!"  And I assured her they do.  Because I had been taught by Maurine Bickle that they do.

Maurine Bickle had the most astonishing nativity scenes I've ever seen.  When she set it up at church every year it took up three 8-ft long tables.  She had been amassing it for decades and it contained just about every small human and animal figurine ever made.

There was the basic Mary and Joseph and the Baby Jesus.  I can't remember if she had more than three wise men.  But she had gobs of shepherd and angels.  But it was the bystanders that came to watch with the shepherds that always blew me away.  Maurine invited every little three and four year old child she taught in Sunday School to bring their own contributions to add to the nativity and they did.  There was the bride and groom off a wedding cake.  Play People and Weebles.  Army men and toy soldiers.  Just about human representation that was under two or three inches high.  And animals.  Maurine's manger scene wasn't limited to camels and cows.  She had horses, cats, dogs, turtles, elephants.

This was the great lesson Maurine Bickle gave us:  Everyone came to the manger.  Even snowmen.  We all stand in childlike awe. After all these years I still haven't figured it out.  I stand with the others and gaze on the baby.  Will this be the year we have Peace on Earth?