Distracted by Differences, Bound by Christ

I'm so inundated with memories of last week I might need to let it marinate a while.  I have words and pictures bouncing around in my brain, willy-nilly and there's no cohesion right now. Sometimes these experiences end up being more than one post, so maybe I could get a pass if this week's blog isn't what you want it to be. Hopefully, I can make it up to you later.

I can post a couple of photos for Sonia. 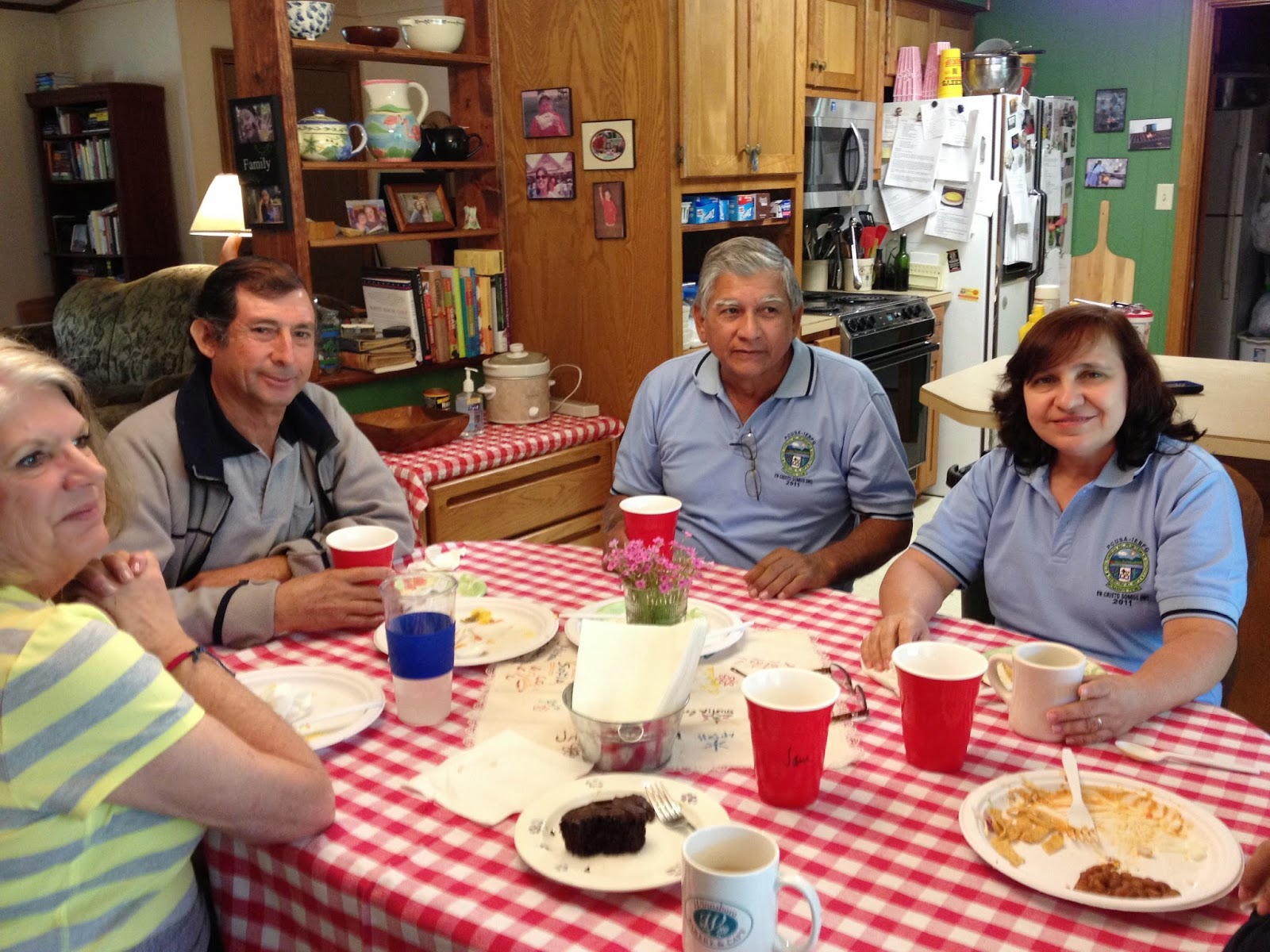 Linda, Rumaldo, Ludin and Miriam at my house.
The menu was easy:  hot dogs and apple pie. 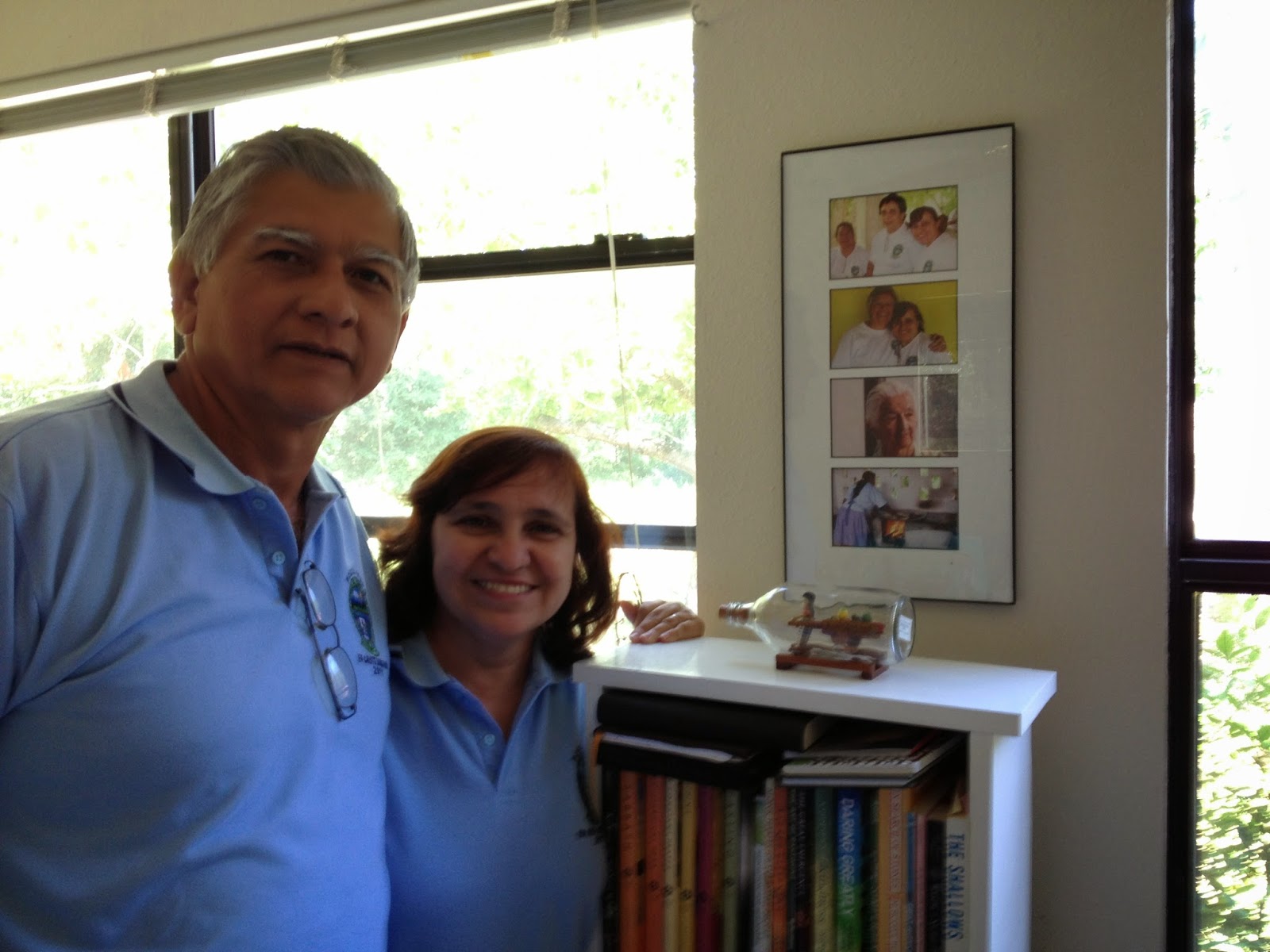 For several years I have had photos from Guatemala hanging in our bedroom.  It was good to be able to show Ludin and Miriam what good memories I have from our visits.  There is a photo of Miriam, Sonia and Loida in one spot.  I think the photo of Elda Leon, Ludin's mother, is my favorite.  I still think she is the most beautiful woman I've ever met. 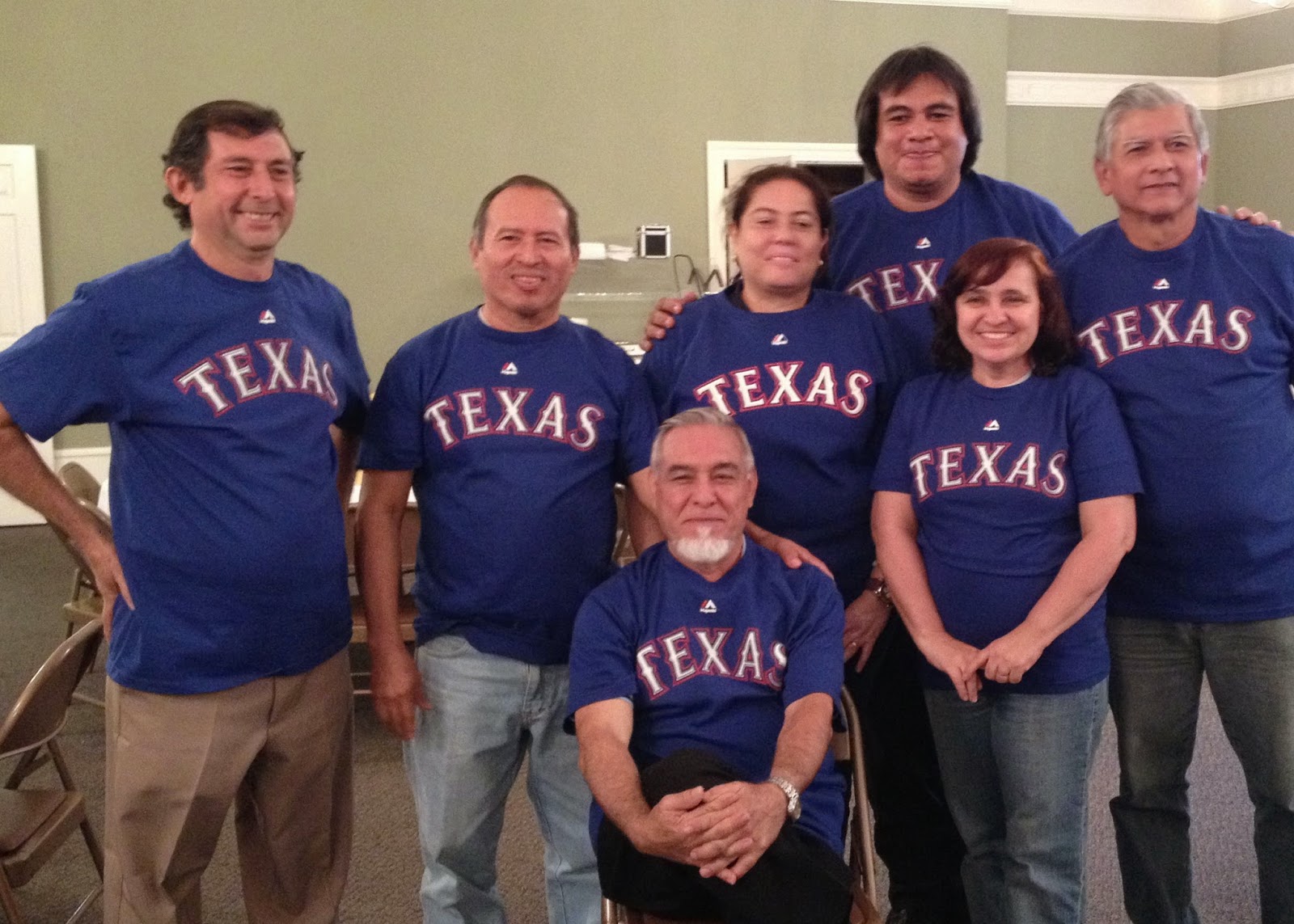 Real Texans now.  Shirts were a gift from Eastminster Presbyterian.

Specifically about saying the same things using different words.  Worshipping the same God in different ways. Next week I will have a lot more to say about the Guatemala visit.  But today, I want to tell you about giving somebody a house.

Our church in Winnsboro is over 100 years old.  The current white frame sanctuary was built around 70 or 80 years ago.  You can probably get a picture of it in your mind.  It is in immaculate shape, being lovingly cared for over the years.  Not so much for the other houses in the neighborhood.  When the house next door was foreclosed on, our church fathers saw a great opportunity to get the land so they could turn it into a parking lot. That wonderful group of church members called Anonymous bought the house for a song. Well, a few thousand songs.  I love Anonymous.  Anonymous is my favorite member of our church, whoever they are, wherever I am. A couple of times I have even been Anonymous (on a very modest scale) and it was a lot of fun.

Like all good Presbyterians, once we had the house we immediately formed a committee to see how complicated we could make things.  A group set upon figuring out how we could use the building as a ministry in the town.  We got estimates of what it would cost to bring the house up to a place where actual humans could live instead of the termites and mice who were already living there.

We had a professional inspector go through the house and were immediately intimidated by the financial resources we would have to pump into it.  And, as wonderful as Anonymous is, the rest of the congregation was going to have to contribute some of their own pictures of dead presidents, not to mention some physical labor.

Then the Holy Spirit stepped in.  During one of our committee meetings we walked across the street to the Morgan's Mercy Mansion compound to see how they had brought a similar house back to life.  (Except I'm not supposed to call it a "compound", lest you think they're a cult ready to commit mass suicide at any moment.)

The rehab is run by the local Pentecostal church called His House Ministeries.  They know that a lot of folks in our town are wary of them; thinking that anything besides their own mainline denomination is suspect-- walking around talking in tongues, flinging themselves about and handling snakes and such.  Thankfully, they have a good sense of humor about it over at His House.  They worship in a huge building across town.  But the rehab they sponsor is in an old nursing home across the street from the Presbyterians. They have remodeled the nursing home and use it for a six month program for drug and alcohol addiction.  It sits on almost a whole city block because they have already done what we were talking about, buying the small run-down homes for a  song and converting them to the church's use. In their case they are using them to house graduates of their program who have jobs in town and have their children living with them. They have a tall wooden fence ringing their property, hence the "compound" description.

Our committee went over to see what they have done, thinking it would help us understand what is possible.  As we walked around outside, Larry noticed they have more than enough empty land within the fence to hold the house we had just bought.  So he suggested giving them the house on the condition they move it off our land and onto their own--across the street.

The church fathers were never really interested in the house, it was the land they wanted.  They want to use it for a cool playground and second parking lot. The house was almost a thorn in the side for them.  And we were pretty sure Anonymous felt the same way.  It became immediately clear that the house needed to be moved over to the Mansion compound property.

We talked to the Mansion and set the wheels in motion.  And this morning we signed all the legal documents. We gave the house away.

What had been an albatross to us became a castle to them.

After signing all the papers we talked a bit about our ministries.  The town has gotten over their initial fears of having a drug rehab, never mind one run by Pentecostals. They have seen first hand now how lives can be changed through prayer.  I have never seen such a non-denominational support like this town has for the Mansion.  They will be able to get widespread community support to rehab the house.  I saw this with the house they fixed up last year.  One of the  Methodist churches in Winnsboro did all the floors while another one contributed furniture.  A Baptist group from Ft Worth did some major carpentry.  The father of one of the Mansion ladies rebuilt a bathroom. The Mansion girls painted the whole inside of the house.  Even Beaven and I worked on it.  He installed new ceiling fans and lights in all the rooms.

Just about everybody in town worked on this house in one way or another.

It's amazing to see what you can do when you recognize we're all working for the same boss.  Differences fade away.  And it was the same last week when we hosted our friends from Guatemala. We were all saying the same thing, just using different words.

When our meeting this morning was opened, a Presbyterian prayed.  When it was over, the pastor at His House prayed.  Same God. Different churches worshipping the same God just in different ways.

I talked a bit last week about how simple Christianity can be.  We keep trying to frill up our religion with creeds, confessions and dogma.  We argue about who we ordain, how we read the bible and even who owns our property.  I am increasingly drawn to ways we can ignore these distractions and just worship and serve God.

For the last couple of days I've wondered about what God was up to with Tower of Babel.  Why would God separate us into different languages? It seems very counter-productive.  But then so often God doesn't make sense.

I wonder if maybe God wants us to have to go to a lot of trouble to work together. I found that it helped me understand Spanish if I could just slow down and listen.  Listen. One of the guys from Guatemala had some English and helped me with my Spanish a lot. I would struggle with a word and he would pronounce it slowly, patiently.  Then again slower. Despacio.  Until I could pronounce it correctly.

Something in my gut says that God wants us to communicate.  But I chomp at the bit wanting it to go easier, faster.  Certainly, there is a great benefit to taking it slowly and working together. If I came to the language immediately and without any effort I would never have had to lean on Daniel for help. When it doesn't come easily it has more value.  Life is a team sport.