I am a Stuart

.........a continuation of my Scotland stories.  The last one before I resume life in the colonies.

So, it turns out I have a castle.  This would not have been as big of a deal except that Crysta Brantley, (nee Gillespie),  had been dropping stories that when she has visited Scotland in the past she likes to go to the castle of HER ancestors, the Gillespies.  She will make a day out of it and walk through the grounds and talk to the current owners of the Gillespie castle.  They even have a cat on the premises, and she takes a picture of the cat and enjoys feeling at home.  The faint old family ties are really something, however tenuous. 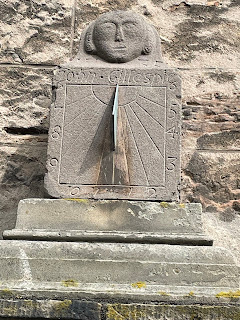 As we drove to St Andrews I spotted this door with a carving over it that said "Gillespie" so took a picture for Crysta.  So, maybe her people were all over Scotland.  I didn't see any Stuart doors.  But, then we had a whole castle. So, there's that.....

When the group extended our Scotland trip to Edinburgh and then added a trip to see the Stirling Castle I didn't think too much of it.  I wasn't up on my history at that point.  But then they told us this had been the home of the Royal Stuart kings and I came to attention.  These were MY people!  During the long walk up the hill to the entrance I kept poking people in the ribs and nodding my head toward our destination:  "This is MY castle we're headed to."  I was quite puffed with pride.

It was a cool castle, too.  I especially enjoyed the big room where they still have events. It has two huge fireplaces facing each other with room for five-foot logs.  Santa Claus has a choice of which chiminey he wants to use at this place. I bought a ton of Stuart souvenirs. Our plaid is the classic Royal Stuart. Some may choose to spell it Stewart but not my family. 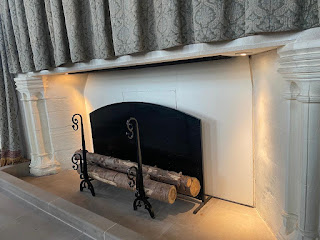 This is what a fireplace big enough for five-foot logs looks like.  It had a twin on the opposite wall. 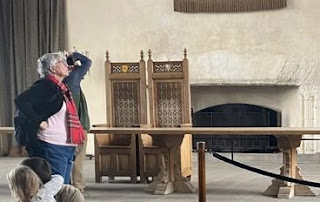 And here I am with my new Stuart stole/scarf......

My own genetic roots have never been proven beyond my grandfather's boasts that were usually followed by an uncle or two taking me aside to remind me that I shouldn't believe a thing Granddaddy said.  However, if you look at a photo of JEB Stuart in Civil War history he bears a startling resemblance to all the men in our family.  I'm just saying that I would be willing to take a DNA test.

But being part of a family goes beyond DNA as the world will discover soon enough if we haven't already. Between sperm donations and adoptions and divorces, people are increasingly raised by parents who are not biologically kin to them and we are discovering how totally cool that is. Being a good parent has nothing to do with biology.  Being part of a family is a whole mindset.  However, I was brought into the mindset of being a Stuart early and clearly as a child. In my case it's in my DNA, whether I wanted it or not. We can discuss the tiny little schizophrenia gene later.

I think I was around 10 years old or so when being a Stuart was first impressed upon me at a family gathering.   I must have been driving everyone nuts, which is saying a lot because whenever my father and his two brothers got the families together it was very gentile and controlled chaos.  I learned at an early age how to engage in two conversations at once, sometimes three.  Everyone all talks at once to everyone else when the Stuarts get together.  All the time. We are not shy people. Raging extroverts might be the best term.

But on this one occasion, Uncle John handed me a piece of paper and a pencil and told me to go write down this sentence 25 times:  "I am a Stuart."  To this day I'm not sure why he did this.  Maybe it was busy work to get me focused and out of the way.  Or maybe I had said something that caused him to think I needed reminding of who I am. But it made enough of an impression on me that I still remember it.

I am a Stuart.

Castles are built on hills, not down in hollows.  Walking up the hill that day in Scotland I felt a feeling of real pride, thinking, "I am a Stuart."  But more than the five-foot fireplace I remembered the reputation my own father had, and my Grandfather, the relatives I knew.  I knew they were men of integrity, who kept their word and who treated people fairly.  That is what goes into my understanding of what it means to be a Stuart.

I received word on my way home from the trip that my oldest cousin died while I was in Scotland, possibly while I was visiting our castle.  John Thomas Stuart III was one of those guys that people looked up to, not because he lived on a hill but because he had good values. He kept his word.  He rose to the top of his profession not just because he was smart but because he was dependable and he cared about people. The last note he wrote to me before I left on my trip was to encourage me and to remind me that I was special.

The world needs more men like Cousin Johnny.  There is a huge vacancy in that department right now.

Maybe you will fill the void. Of all the things we get to choose in our lives, one of them is to choose who we are and how we act.  You get to set your own values and live them out.  You get to decide who you are.  Maybe you are a Stuart, too.