Life in the Fast Lane

OK, so I set the pasture on fire yesterday but it’s out now and that’s the main thing isn’t it?  I mean, “All’s well that ends well” dontcha know?

Yesterday was supposed to be an easy day.  The only two things I really had scheduled was a visit to the old folks' home and a doctor's appointment to check on my broken ankle.
I started out with the exercise class at the retirement home.  Becky and I decided we would make that an easy way to do outreach for our church and so we would join in with the class to get to know our members who live there. How hard can an exercise class at the old folks home be? Becky walks 10 miles a day and she figured it would be a piece of cake.  It turns out the class is harder than you would think.  It’s run by a physical** blinking** therapist. We spent a good hour moving just about every body part that would move and some that I’m not sure were designed to move and I was frankly beat afterwards.
Then, to be extra healthy I went to the gym and ran through the circuit training a couple of times because I had just signed up earlier in the week and I’m still on that "commitment high" that will fade in two weeks.
I went home thoroughly exercised and ready to just rest for the remainder of the day.
Then I noticed it was going to rain for the rest of the week and I had plans to treat my bees for the dreaded varroa mite but first I needed to harvest just one more frame of honey from each hive.  I wanted to get as much as I could from this year's harvest because it was an especially tasty year.
I expected it to be easy.  Just bop in, get the frame, put it in a plastic tub, thank the bees and leave.  No biggie. I wasn’t even going to harvest the honey.  Just get the frames and let them sit in the box until I was ready. I didn't even take my cell phone for photos.  I didn't even wear my glasses.
Then I would take a nap until the doctor's appointment.
I had a very relaxing day planned.
I lit the smoker and took the lid to the hive off but after a few puffs the smoker went out.  As I kept pumping it to get it going I noticed the wire of the base got caught in my bee suit. A flaw—either in the smoker or in the bee suit. I made a mental note:  these smokers are dangerous. 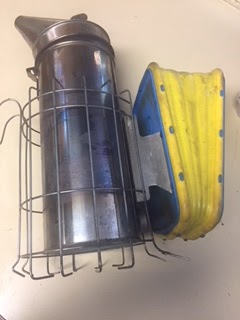 We had bought the new and improved kind of bee suits with holes that are ventilated—bee suits can get really hot and these new ones have puffy holes that the bee’s stingers can’t reach past even though air can flow through them.  Very high tech.  But very poor design for getting your smoker caught in them.  I spent a little time untangling my smoker from my bee suit.
I picked up some more pine needles and stuffed them loosely in the smoker.  I didn’t need much smoke since I was only after a single frame of honey.  It wasn’t like I was going to do a full inspection of the hive.  Honestly, I didn’t intend to spend that much time.  I took my blow torch and lit the smoker again. 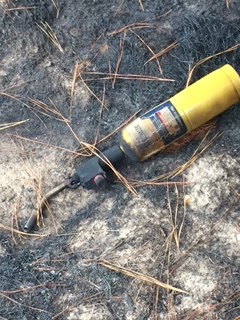 This was the point at which I said to myself, "Girl, you are a-bout to set your self on fire."

I thought about that for about one second.

I turned the smoker over to get a better look at the wire cage where it was caught in the bee suit and flaming pine needles spilled out of the top of the smoker onto the dry ground. By the time I untangled the smoker I noticed the grass was on fire.  I started trying to stomp the fire out and noticed it had surrounded the propane torch which I figured was probably explosive, so I decided to avoid it and go stomp out flames in another area since the fire was spreading in several directions and I had my choices of places to stomp.
My bee’s hives are at the fence line between our grassy pasture and my neighbors’ woods.  On the other side of their woods is their beautiful house, barn and valuable horses—nothing you want to burn down.  If I was going to save anything it needed to be the woods.
Fortunately I had driven the riding mower out to the hives since I’m still limping around from the broken ankle so I drove over to get the garden hose.  Emily has started a butterfly garden nearby and has a garden hose but it wasn’t long enough to reach so  I had to drive around to find another hose and dig it out of the underbrush.  I finally took my bee suit off while I was at it.  I figured the bees were busy with their own problems by now since the ground around them was ablaze and I might not need the suit anymore.
Back at the fire I connected the hose but only got a trickle of water. The hose I had connected had been run over by a mower years ago and had multiple holes in it. There was more water coming out of these holes than the end of the hose, forming a sprinkler of sorts--not much for fire fighting.  So I ditched that hose and went up to the house to get another one.  By now I realized it was time to get my phone while I was at it and call the fire department.
We live on the county line and it’s always a toss-up as to who we get when we 911. It’s also hard to tell them where we live.  Our house is in Wood County but our mailing address is in Hopkins County.  The Winnsboro fire department used to know where we live.  We went through a spell about 20 years ago when we were still clearing the land and had to call them about once a year, one time twice in one day.  Those were the good old days, “Yeah, lady, we know where you live.”
But this day I ended up with the Coke-Pleasant Grove volunteers who had no idea where to come. Our mailbox is nowhere near where the fire was. They called me on my cell and asked where the fire was...…..they could see the smoke but couldn't find a gate into our field.  This was mostly because they were on the wrong road so I ended up having to drive out to the county road to meet them and guide them out to the neighbors’ house and into the woods.  After I got off the phone with them I called the doctor's office and told them I wouldn't be able to make my 3 o'clock appointment because my pasture was on fire. Fortunately I have the doctor on speed dial because I'm old and old people live this way.   "Did I want to re-schedule?" she asked.  I told her I would have to think about it later when the ground beneath me wasn't ablaze.
By the time I was able to meet up with the fire truck I had managed to put out the grass fire in our pasture and the fire in the underbrush was moving very slowly towards the neighbor’s house.  I guided them through the neighbor's front yard and into the woods that separate us.
There were about three men and one women.  The woman told me to go home and drink some water and lay down while they took care of the fire.  Less than five minutes later she called me to say the fire was out and make sure I was OK.
When I went out this morning to check on the bees I was delighted to see the boxes intact--  the thing could have been so much worse; frames of wood and beeswax.  You know they make candles out of that stuff. 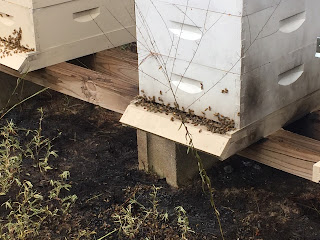 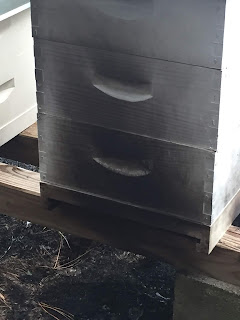 There are hundreds of dead bees on the ground below the entrance. Yet of the remaining 9,000 or so bees I saw several carrying pollen into the hive like nothing had happened.  I won’t be taking any more honey this year.  And if you get a jar from me for Christmas you should be impressed.  The 2018 crop was an experience.

I did take a jar to my neighbor-sort of a peace offering.  She is still speaking to me.  In fact, she says the honey is delicious.
Posted by Jane at 5:12 PM