Have Hairnet, Will Travel

I know some of y'all think I'm totally off my rocker from time to time and that's OK. What you may not know is that I have a food handler's license.  It cost me about ten bucks to take the class online.  It took about half a day and everything boiled down to about three basic concepts:  Keep the hot food hot.  Keep the cold food cold.  And wash your hands a lot.  I think I made a respectable score of 73 or so on the exam. 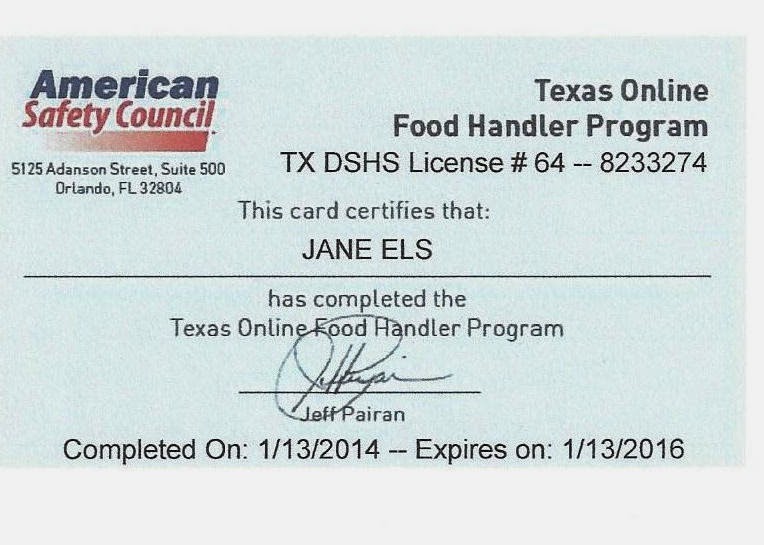 I'm very proud of this license because it means I can legitimately work in the kitchen at Camp Gilmont.  And I do love a big kitchen with shiny stainless steel equipment.  I love feeding a lot of people. I love being part of a team that feeds folks.  I love being part of just about any kind of team, except those that involve running or jumping.

Most times the meals at camp are routine.  The campers can almost predict what will be for each meal and the cooks could probably prepare the food in their sleep.  But I found the most exciting week of the camp's year and invited myself to take part.  It was more fun than I can fully describe.

Every June for the past ten years or so the kitchen at Camp Gilmont converts itself into a Gluten-free kitchen for one very special week for kids with celiac disease. They call it The Great Gluten Escape.  It's almost like cooking Kosher but easier and without having to separate the pots and pans between meat and dairy.  All ages come from first grade to high school.  The camp offers everything any other camp offers: swimming, canoeing, archery, hikes, games...they have it all PLUS safe food.  Everything the dining hall offers is safe for them to eat.  It's ALL gluten-free. And the kids eat themselves silly. 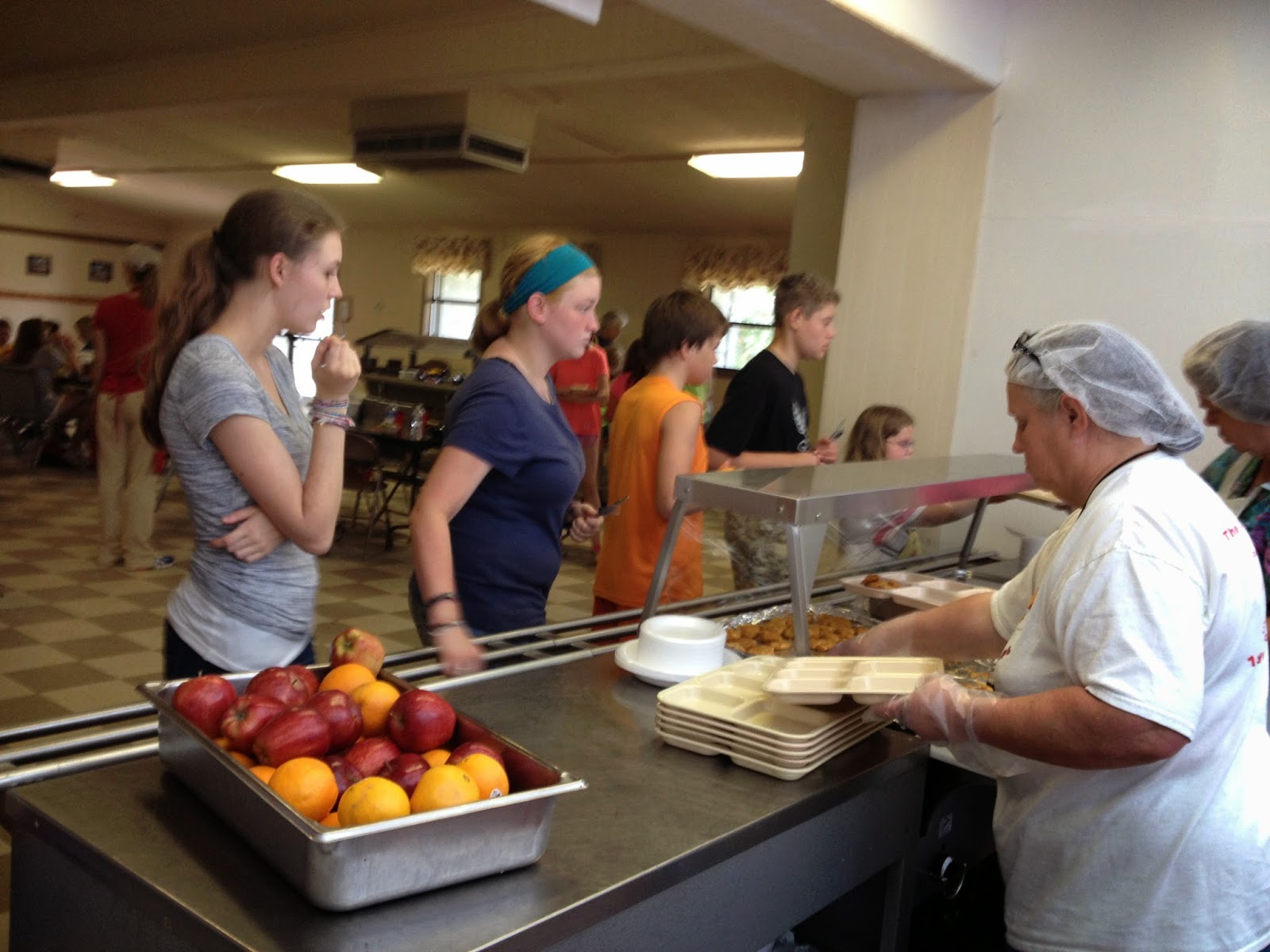 Celiac is an autoimmune disease where the small intestine attacks itself when gluten is ingested.  Even the smallest amount of gluten can cause everything from an upset stomach to vomiting and diarrhea. The only solution is avoiding gluten.  That's a lot easier said than done since wheat flour is in so much of our food.  Something as simple as a cupcake at a birthday party is poisonous.  Even a communion wafer can make you sick.  Most churches are going with an optional gluten-free wafer offered on a separate plate.

Right now "gluten" is the current buzz word making the rounds.  A lot of people think it's healthier or maybe lower in calories so they jump on the gluten-free bandwagon just because it seems like it's a smart choice. Well, not everyone needs to do this and you should thank your lucky stars if you can jump on this particular band wagon then jump off it whenever you take a notion.

Not everyone is this lucky.  Instead, they just thank their lucky stars that they figured out why they were sick all the time then found out what to do about it and can actually find their food in a regular grocery store.

ALL the food served at Camp Gilmont for this week was gluten-free.  Some foods are naturally this way, like fruit or meat.  But anything that involves a flour has to be made from a pre-packaged mix or made from an assortment of flours that are safe.

The clear leader of The Great Gluten Escape at Camp Gilmont is Mama Rose Stevens.  She drives to Gilmont every year from San Antonio.  She's a teacher by trade, a Catholic by religious practice and a fantastic mother who approaches food with the attitude of a Mama Lion.  She wants tasty and healthy food for her babies and will do anything to get it.  She's used to cooking for crowds and said our group of 57 was actually a smaller group than when all of her relatives get together to eat.  She knows how to handle kids and can remember names the way good teachers have the entire class pinned down by the third day of the year. 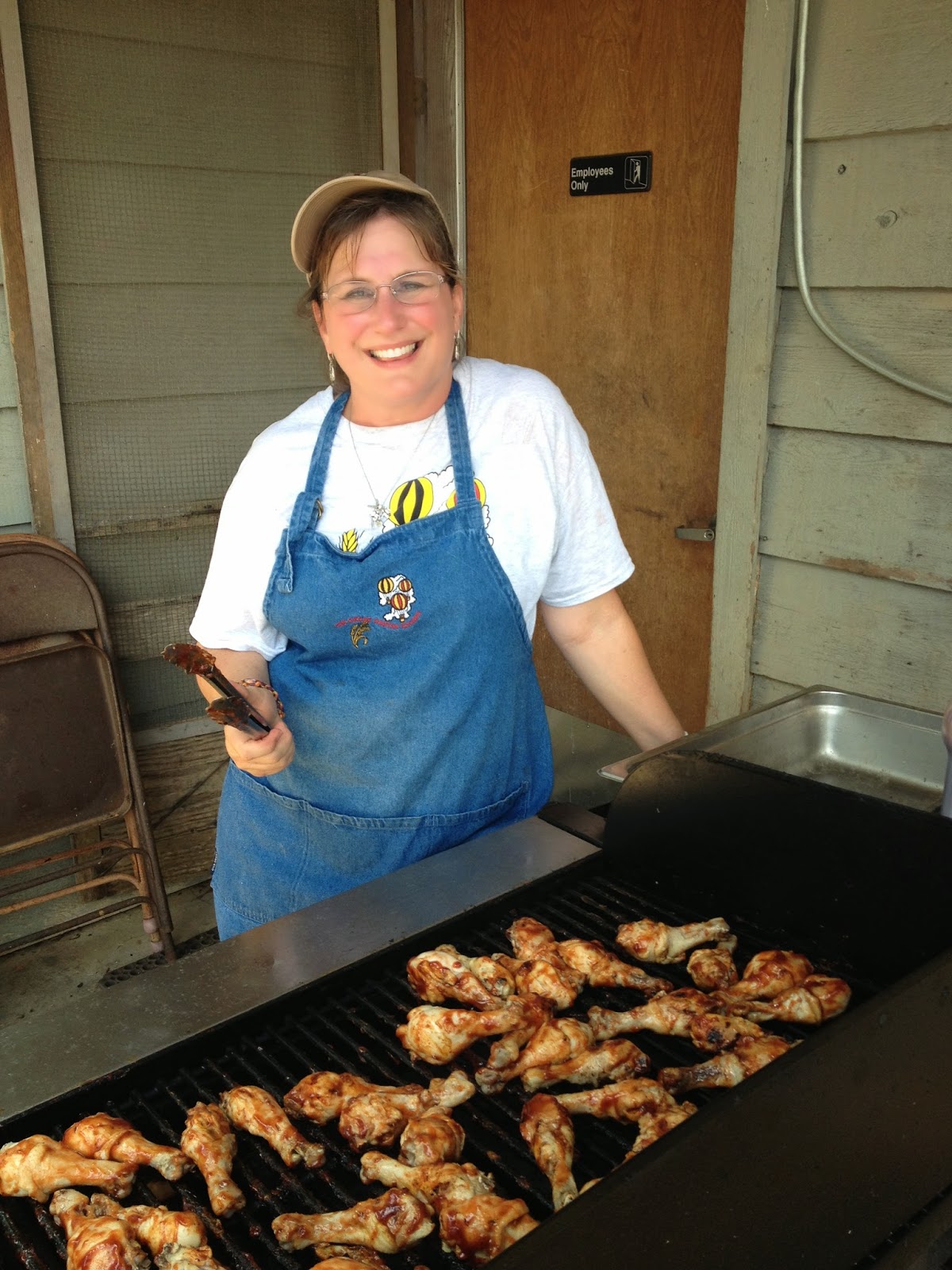 The first afternoon we served grilled chicken. This photo doesn't show how big this grill really is.
It's really about three times that long.

Rose's trusted assistant is Monica Brindza, another mother with a kid at camp.  Monica somehow ended up being the one to operate the huge Hobart mixer.  She made the pizza crust, peach cobbler crust, breakfast muffins and a couple of cakes.  I was a little jealous. 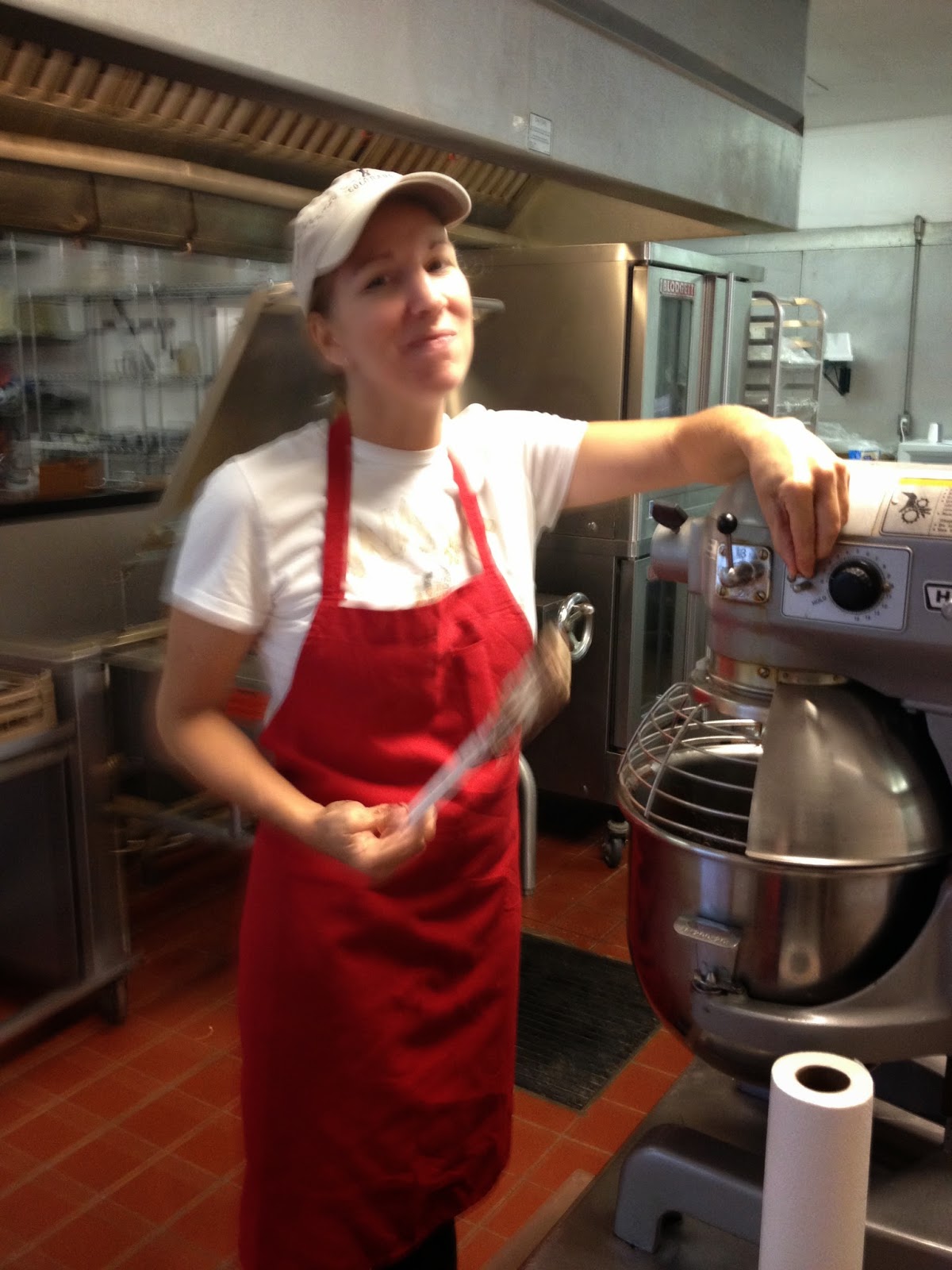 They have the most astounding array of equipment in the kitchen.  A couple of the regular Gilmont cooks also work in the cafeteria at the school in Gilmer where they feed 400-500 kids at a time.  They know how to use this equipment.

My favorite is the brazier.  I wish I had taken a photo of it for you.  It's about the size of a small bathtub. This thing can boil, braise, roast and fry whatever you want... then....this is the part I love: ....the thing is built so you can tilt the pan to pour out it's contents either into a serving pan or pour it through a hole in the floor with a grill covering it.  I have no idea where this hole goes. But what they can do is wash it right there-- fill it with hot water from the built in tap, scrub it out then pour the soapy water out into the floor grill.  I think if they use it for frying then they empty the oil into five gallon buckets to empty down the grease trap somewhere else. Hasn't every woman wanted a floor drain in her kitchen so she could wash everything down, including her children, with a garden hose?

They also have a steamer and an eight-burner electric stove.  They've got one each of reach-through cooler and warmer, as well as an eight-shelf oven.  They have stacks and stacks of full-size industrial pans as well as pre-cut parchment paper to keep the food from sticking to the pan.

Oh!, and I forgot to mention the walk-in freezer and coolers.  Once, while grilling the chicken in the hot sun Mama Rose disappeared and someone said she had gone into the cooler for a while.

The only tool I got to use was a knife but that was not without rewards or glory.  I spent a couple of hours one morning making crutons by cutting up mounds and mounds of gluten-free buns and hoagies. The kids loved the crutons. Kids always love crutons.  And when was the last time you had the option of gluten-free crutons on your salad?

The hardest thing they made all week was the pizza crust. They knew they needed about seven pans and they knew the pizza crust would be the hardest so they tried to make one or two every day then freeze them.  I know you're thinking "How hard can pizza crust be?" because I wondered the same thing myself.  But let me remind you it was pizza crust without wheat flour. 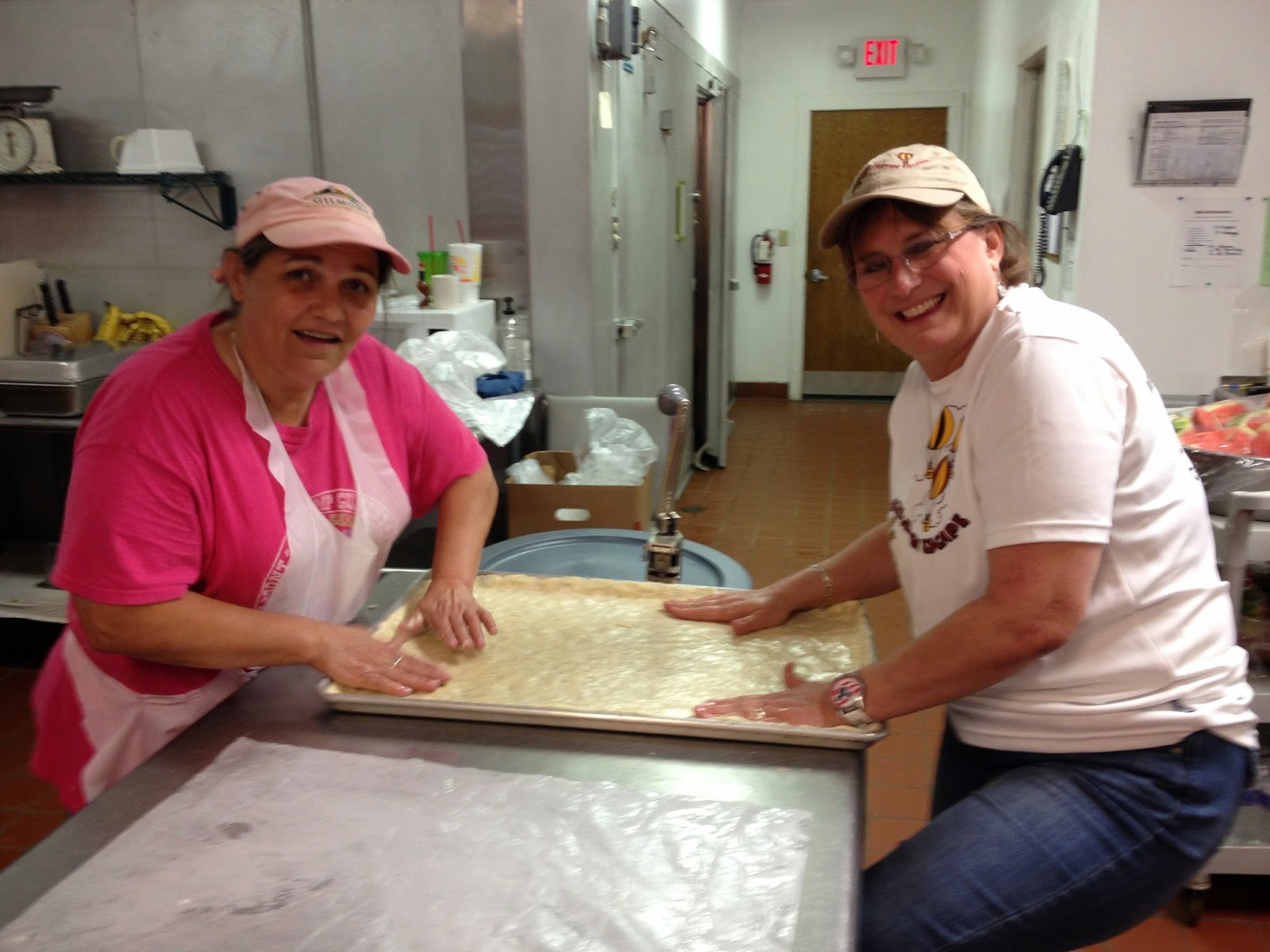 They used about two or three different mixes. The mixes used a variety of flours:  rice, tapioca, corn starch--just about anything but wheat.  The first two brands were hard to stretch and mold into a thin crust.  They tried a rolling pin but doing it with their hands ended up the best method. And about the time they had mastered a technique for one mix they tried the third one and found it was a whole lot easier. And let me say this:  the crust was damned good, sometimes even better, certainly crisper, than what I'm used to.

Now, at the risk of having your brain explode, I want to mention that we also had about seven kids who were dairy sensitive.  This meant that even when we had a safe pizza crust, we still had to make a separate pizza with cheese substitute.  We made a separate cake with a butter substitute and a small batch of crutons with olive oil instead of butter. I get tired just explaining it and was really glad Rose could keep it all straight.

I also got to hang out with the regular kitchen staff at Gilmont.  Each meal usually paired two of the regular staff with Rose and Monica.  Here's a picture of Geraldine and Sandy. Geraldine is the undisputed master of fried chicken, with or without gluten. 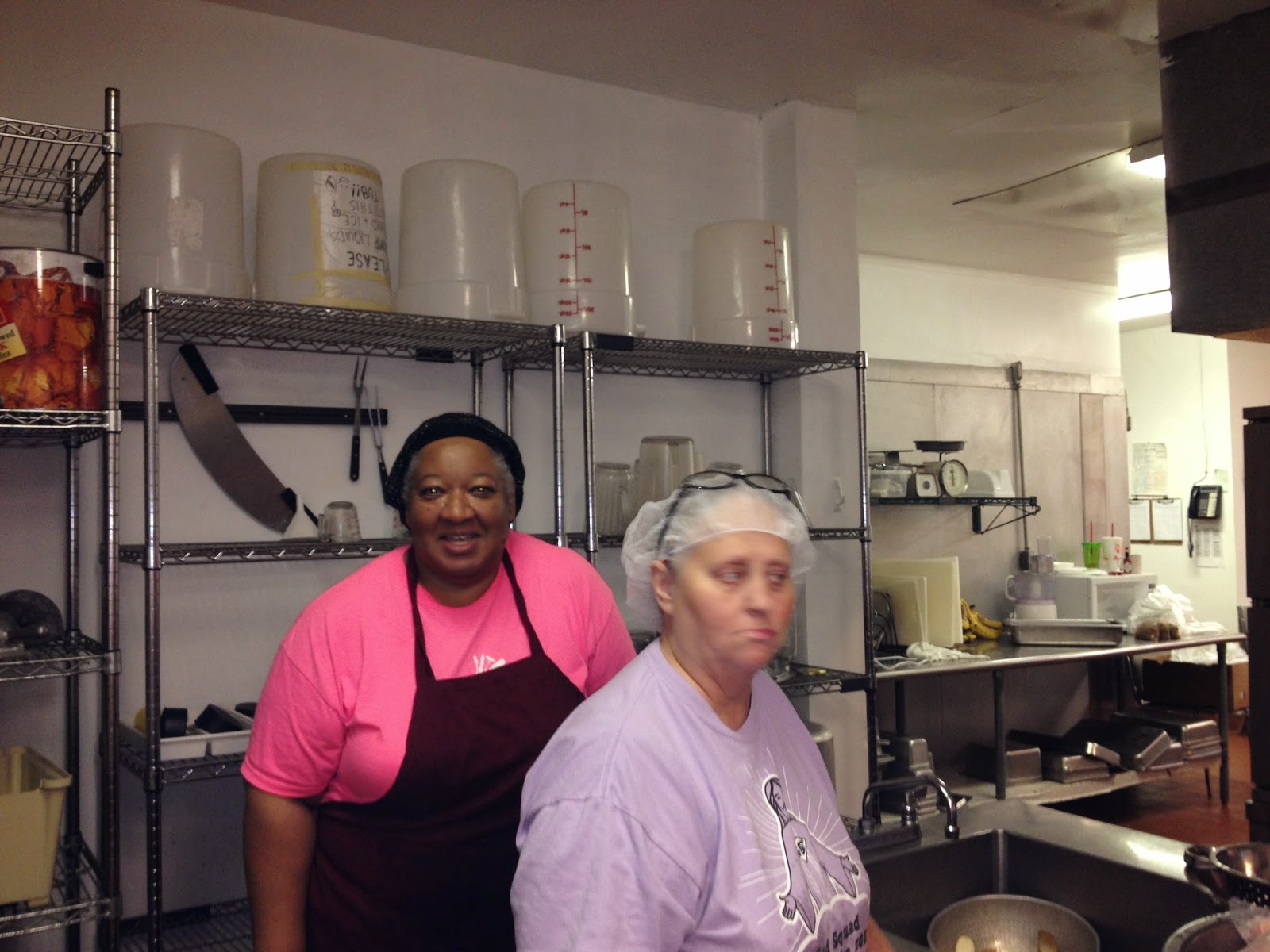 Most of the kitchen staff has been at Gilmont five years or more. Over the last few years their proudest achievement has been a gluten-free cinnamon roll.  Whenever they serve regular (made from scratch)  cinnamon rolls at adult retreats they will offer a gluten-free option.  I've heard of one women in tears telling the staff that she hadn't eaten a cinnamon roll in five years since her celiac diagnosis. 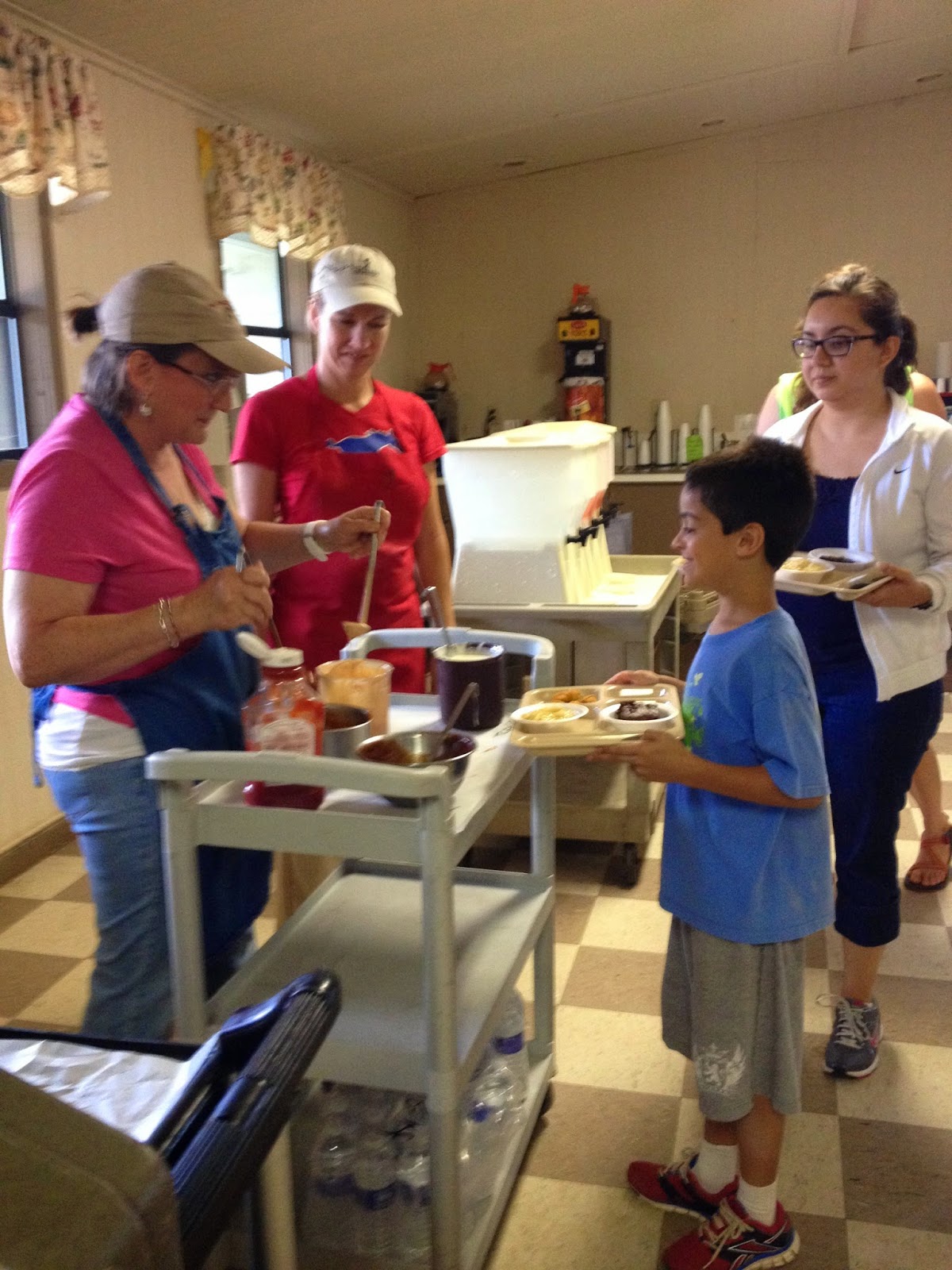 Rose and Monica made a knock-off dipping sauce that tasted just like Cane's famous dipping sauce.  For the chicken nuggets they offered about five different dipping sauces.

Like every week at camp we had a nurse on duty. And for this camp we had two experienced RNs plus one student nurse.


Between the three of them they gave out over 90 scheduled medications each day, starting with morning medications taken out to the cabins because they had to be taken 30 minutes before breakfast.  Then they made nightly rounds to cabins to treat bug bites and wounds after camper’s showered. Most nights they didn't get to bed until 11pm and were back at work by 7:15am the next morning.

Since they were the first camp of the summer they also got the nurse's station ready for the year.  They cleaned out the expired medications and first aid supplies, inventory, and organized the locking cabinets and refrigerator used to store medications and first aid supplies.  This gets the nurses office ready for the rest of the summer of camps and they take this job seriously.

Like Rose and Monica, they have watched the campers grow up. Some of the original campers are now Jr. Counselors and Counselors. 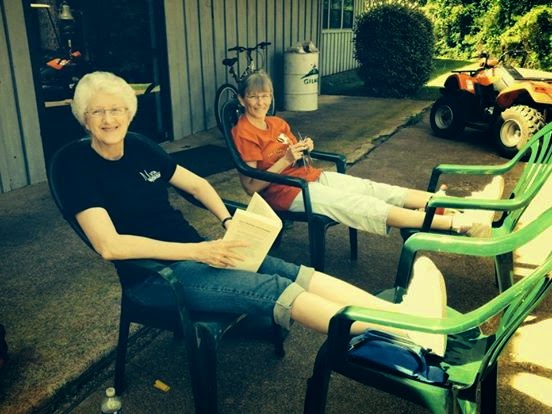 Here's Cheryl Gainer and Jackie Brink taking a well-deserved rest.
Whenever you see the camp nurse relaxing you know things are going great.

And did these kids enjoy the food?  I missed getting a video so can only describe it in words:  When everyone had been through the line Mama Rose announced that if they wanted seconds they should slo..o.o.w.w.ly get back in line.  The dining hall was full of the sound of 60 chairs scraping across the floor in unison and kids "slowly" running to get in line.

Great article with excellent idea! I appreciate your post. Thanks so much and let keep on sharing your stuffs keep it up.
religious food