Time with the Angels

For the last couple of weeks I’ve had a musical video of calm and serenity to share and this week I won’t disappoint you.  Even better, this week it will be someone you might know:  the Angel Band of First Presbyterian Church in Garland.  Originally known as the FiPC Chicks back in the day when the Dixie Chicks were at the top of the charts, this group pulled four women from our choir.  Then an amazing thing happened:   a fifth member joined the group--  the Holy Spirit.  They like to call it Five-Part Harmony.

I knew it was going to be a good weekend when Shirley walked in carrying four instrument cases:  her dulcimer, a mandolin and 2 guitars. She set them down beside the box of books I had brought.  Shortly after that Kat came with her guitar and the weekend began. 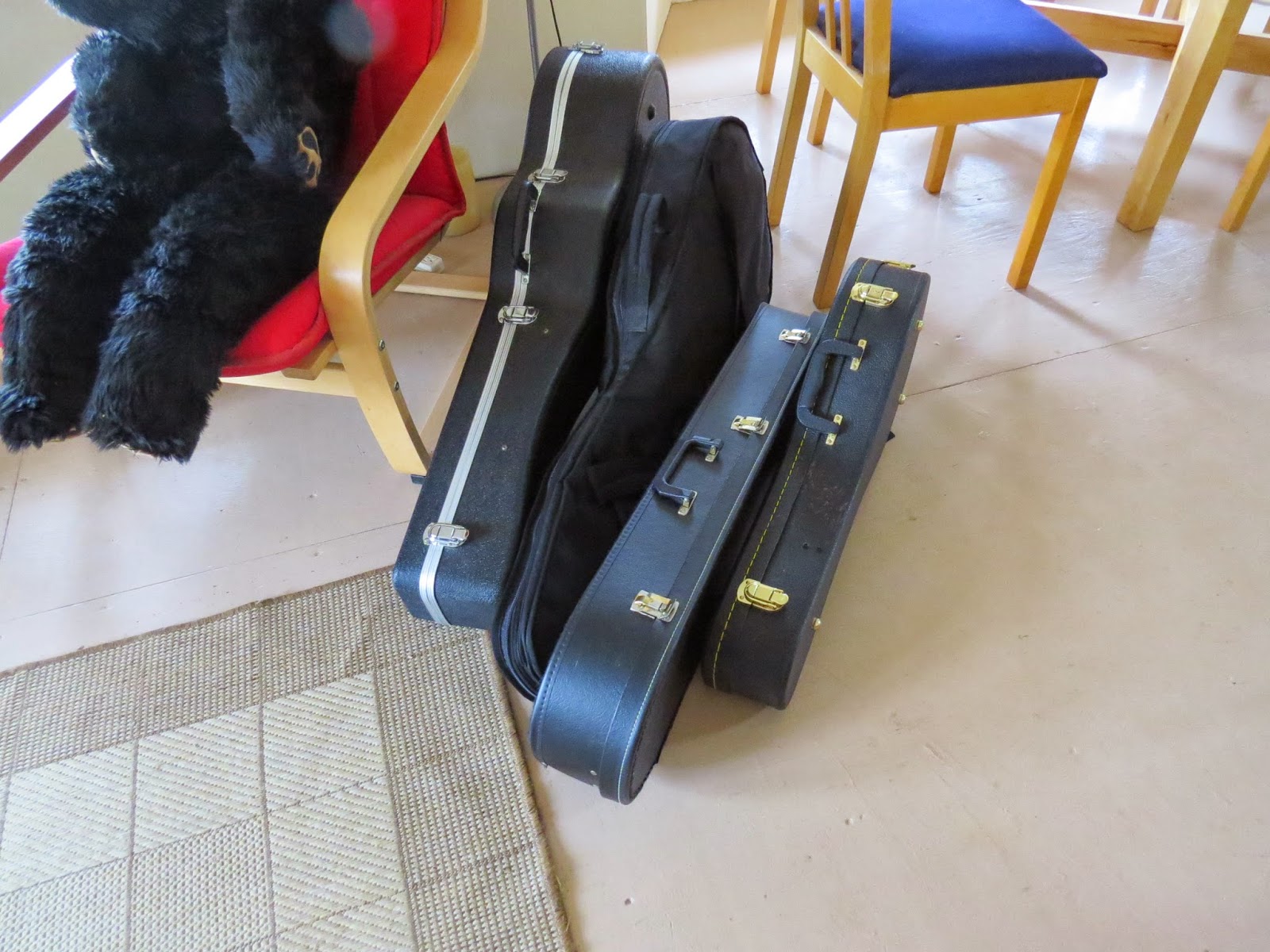 It was one of those serendipitous weekends we started planning months ago after finding a rare weekend that would fit all of us.  And we were all so grateful for the time. We had lost our friend Ann Tubbs in January and time started looking like a more valuable commodity.

Each of us brought something unique to the weekend.

Linda provided us with the experience of living off the grid for the weekend.  She and her husband bought land in the Ouachita mountains of Oklahoma and built their house themselves.  They depend on solar energy, a generator and lots of windows.  They have a well and a propane tank.  But most of their heat in the Oklahoma winters comes from a wood-burning stove in the living room. 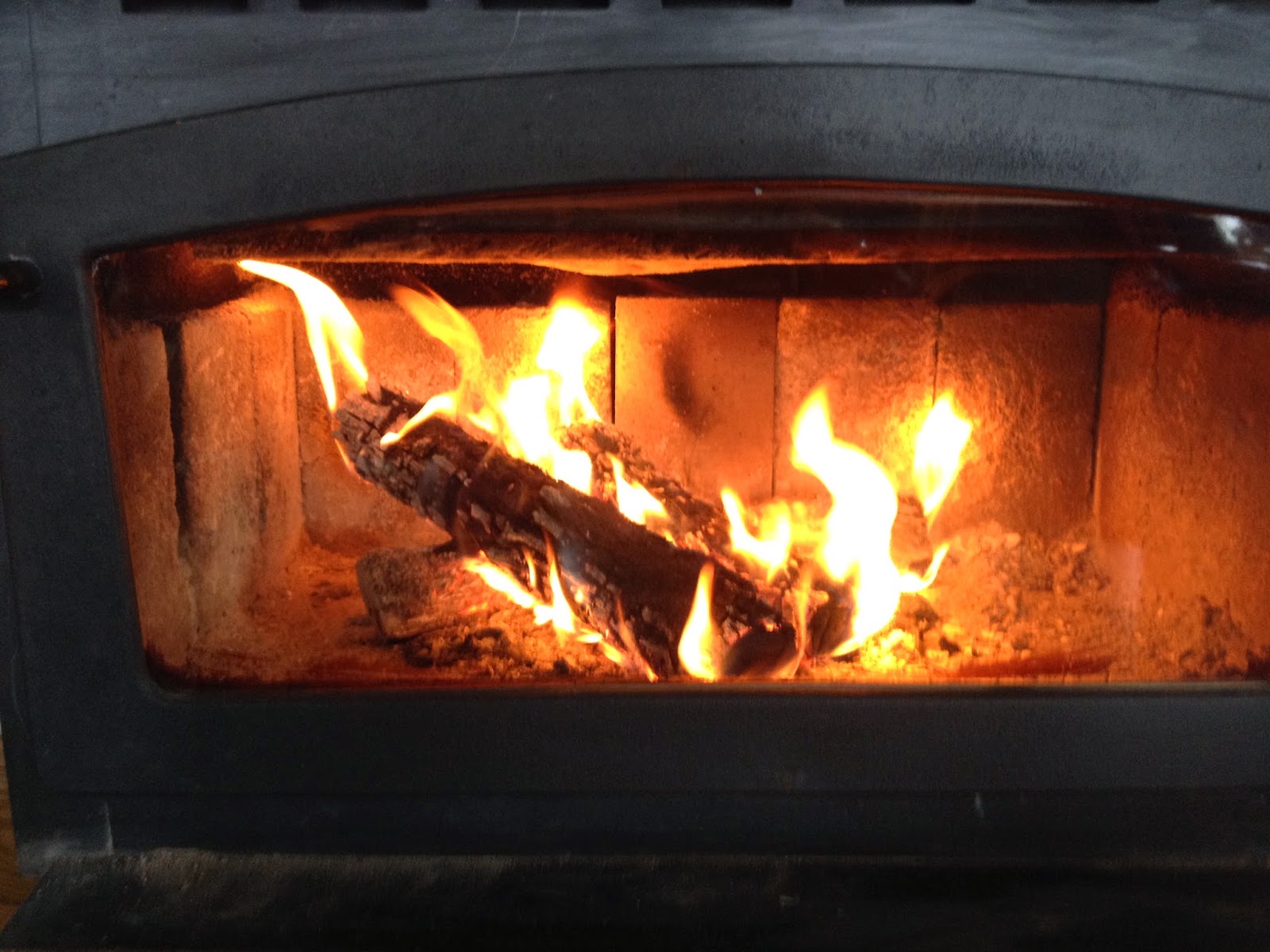 Denny even made bed frames from some cedars around the house.  They're cutting as many cedars as they can because they're nasty, water-sucking, ugly trees (Well, those are my words.  I can't remember the official reason.) 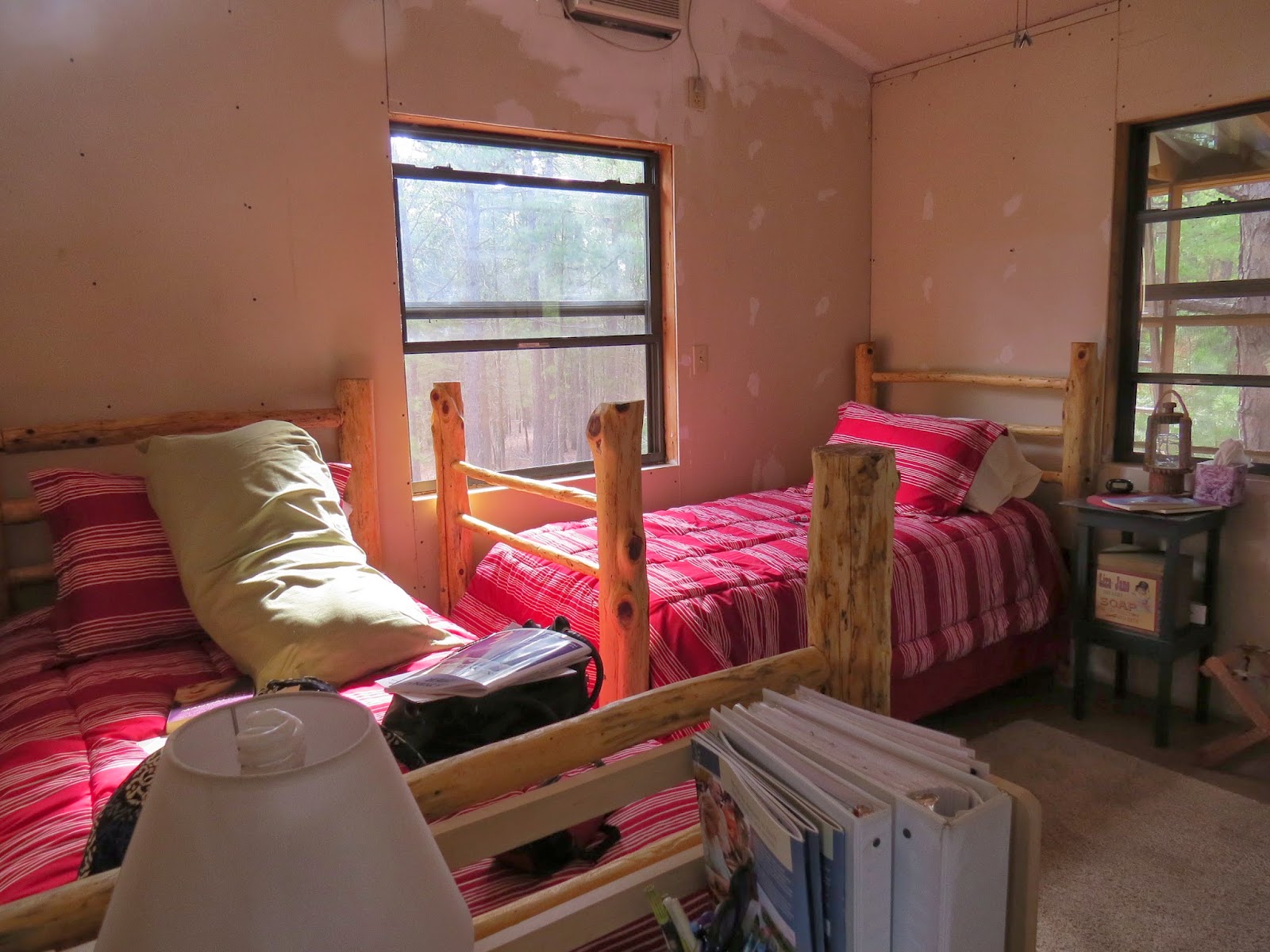 As I was packing Friday morning I had what I called my “Thelma and Louise Packing Moment” where I got so excited I just started throwing in stuff that might prove interesting.  Like four pairs of binoculars, a couple of cast iron dutch ovens and a box of books. Don't ask me how I ended up with four pairs of binoculars--I'm just impressed that I knew where they all were.  At least I didn’t throw in a handgun.  We know how that turned out for Thelma and Louise.

The dutch oven turned out to be a good move. It was one of the off-the-grid moments when I made a pan of perfect cornbread with just a mound of charcoal and the right kind of cookware. 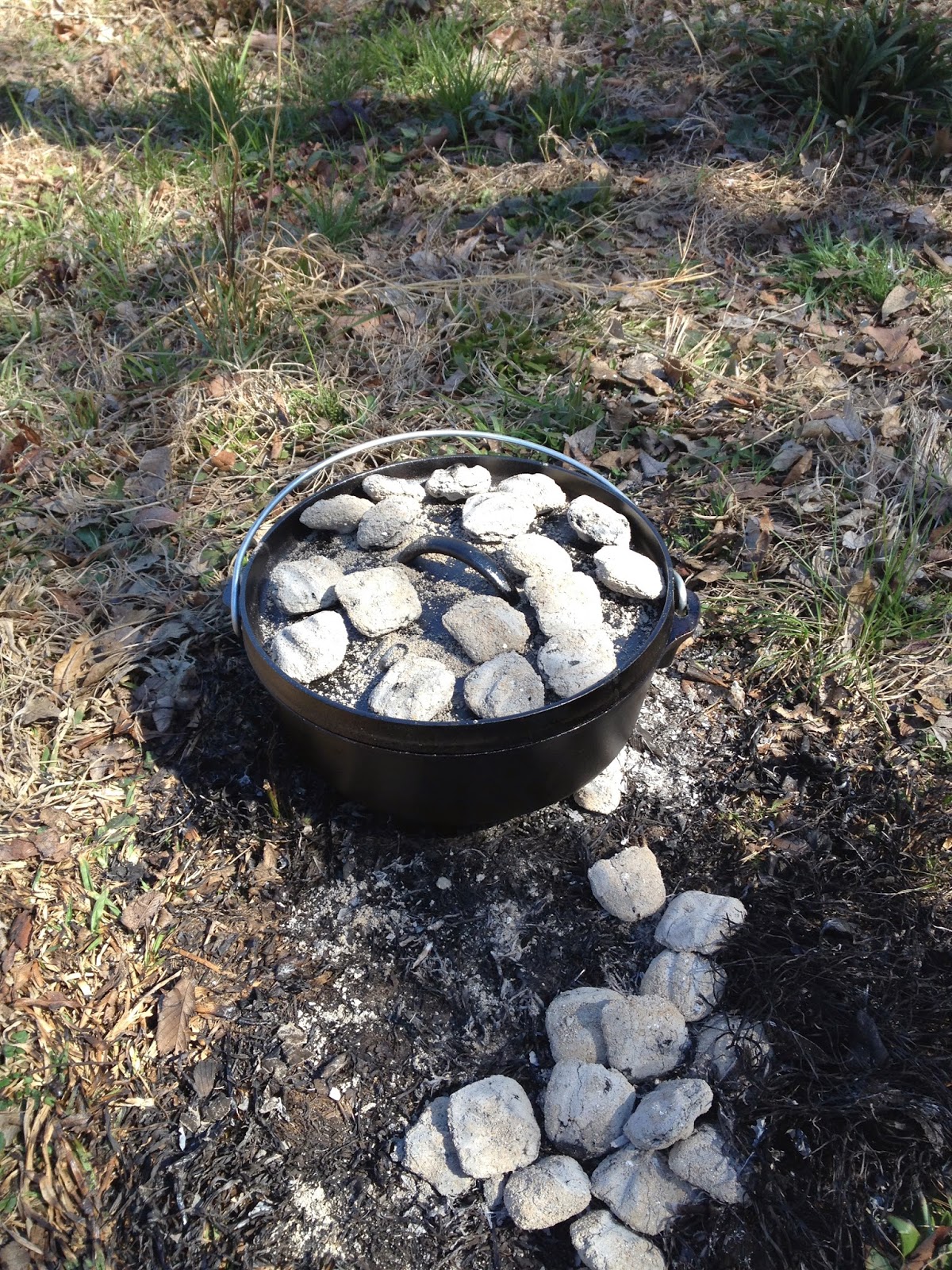 Linda took us for a drive through the mountains.  The angels sang.  I read and made cornbread.  Nancy shared tales of an icon workshop she went to.  She recently spent a week at a monastery learning about icons.  As part of the workshop she painted this one. 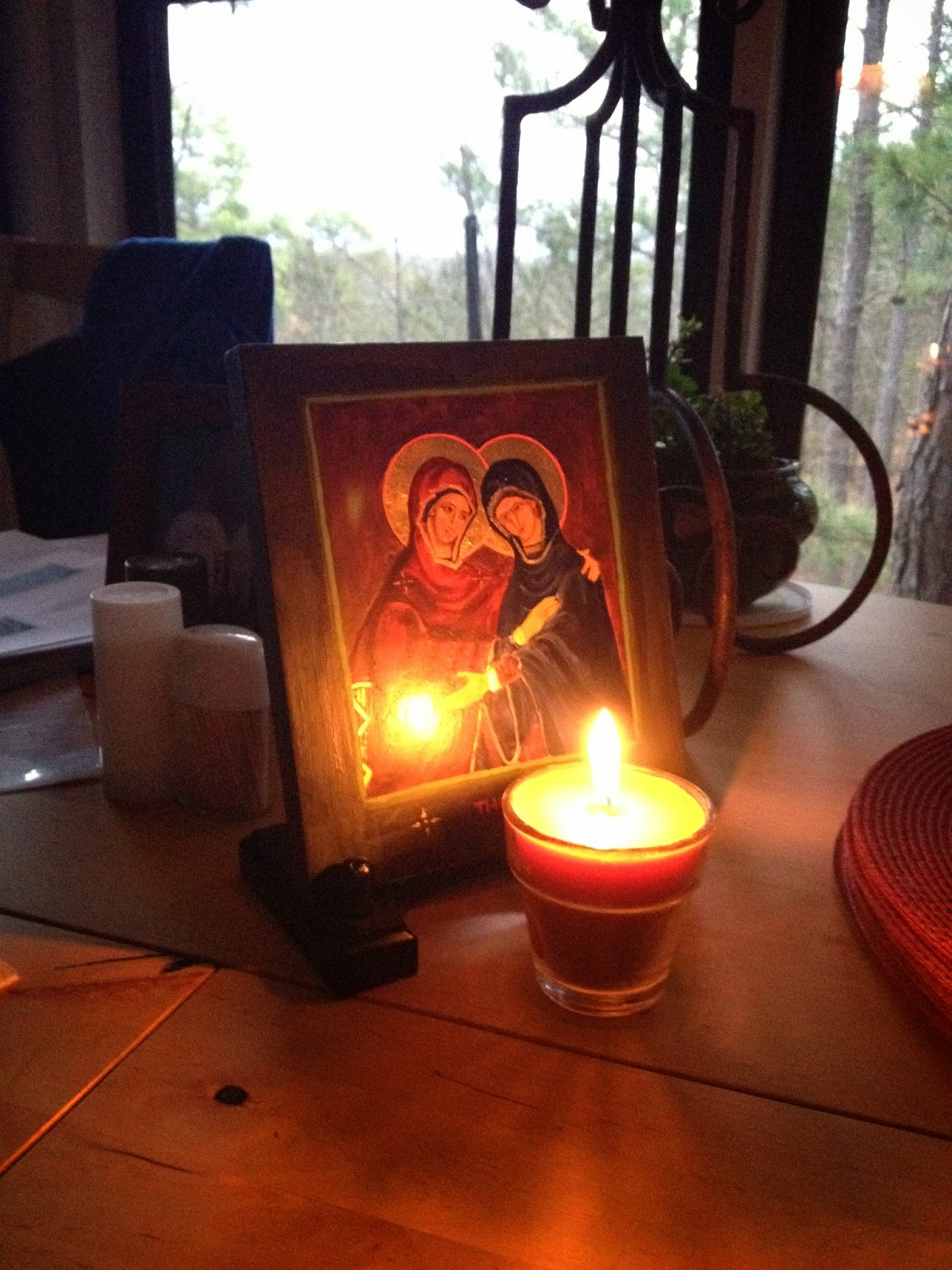 Yes, dear ones, Nancy Gray painted this. She will tell you it is a copy,
done by tracing and she had some help from a nun. But my friend painted this.


Except you don't "paint" an icon, you "write" it.  And the icon is a prayer.  There was something  in the icon of Mary and Elizabeth that Nancy brought into the weekend.  “Awe” feels like the right word.  We celebrated being women. 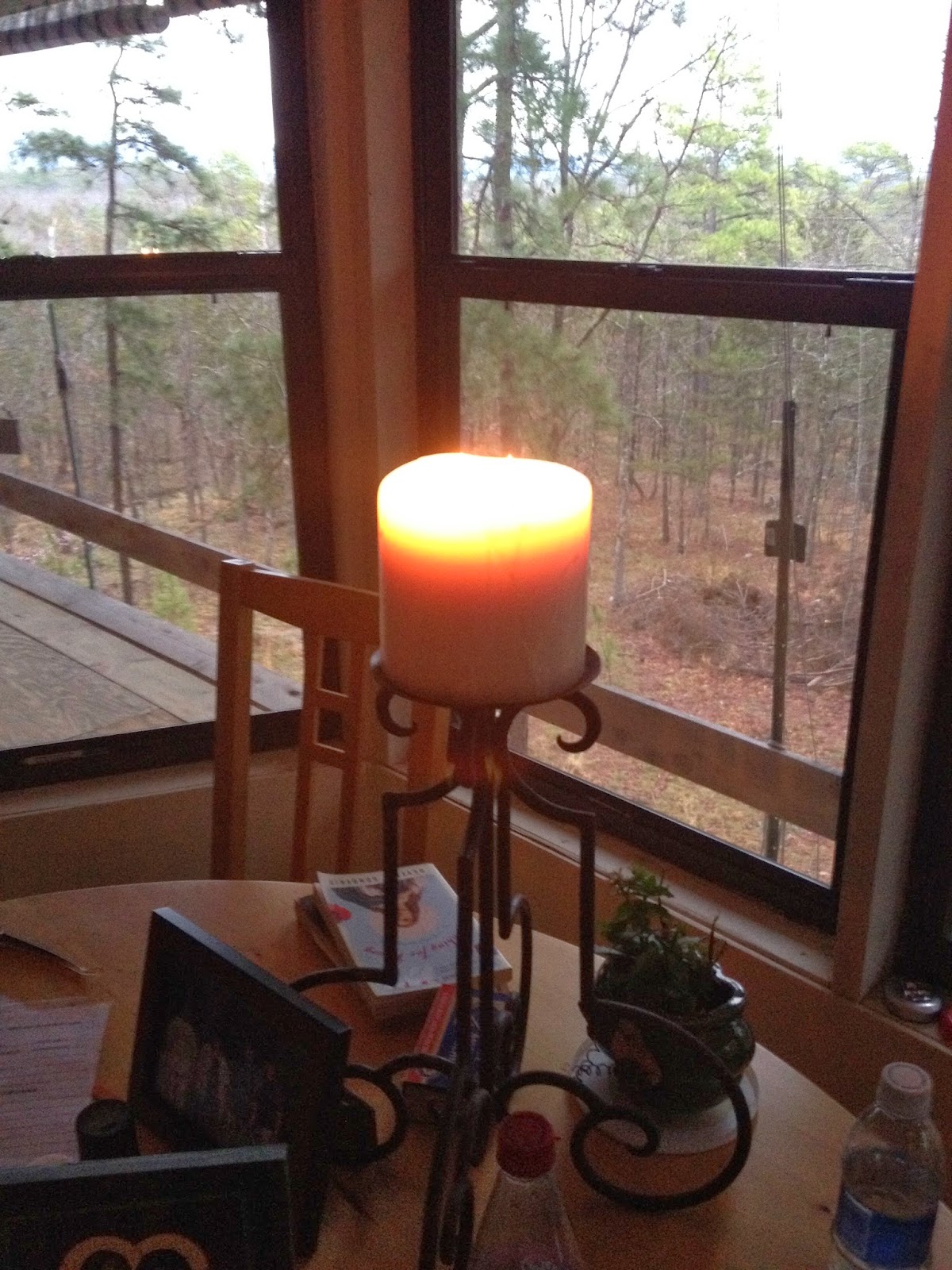 I brought a candle to represent Ann. We lit it each morning to have a little something of Ann’s spirit with us.

Linda provided each of us with a flashlight so small you could just slip it into your pocket .  She had beautiful arrangements of battery powered lighting wound  into flower arrangements to light our way around the house in the dark.  It got cool on the second night and she warmed the bedrooms with a whiff of propane heat for an hour or so before bedtime.

Something happens when you live without electricity. We couldn’t just flip on a light whenever we wanted.  Electricity was too precious, especially on this cloudy weekend.  We read and sang by the light provided by the sun.  When the sun went down we had a few candles but generally our eyes adjusted to the dark.

Cooking was different.  We made coffee the old-fashioned way with a percolator on a propane stove.  Linda told us it was easy enough to find a propane stove but a lot harder to find one that did not have an electric ignition.  They are totally independent of any outside electricity and, actually, almost independent of electricity of any kind. Linda draws the line at summer’s heat and there are air-conditioner window units throughout the house.

The weekend ended with Angels singing at the church Linda attends in Talihina.  Then we had lunch together at the Hateful Hussy restaurant.  You just can't pass up a restaurant with a name that cool.  The Indian tacos were to die for.

Here’s my videos.  An interim pastor once banned the angels from singing this version of Amazing Grace because they like to sing it to the tune of House of the Rising Sun. It gets interesting at the end when I forgot to turn off the camera and you get a minute or so of chatter until there’s a quiet, “Oh shit!” just before the video ends.  But I think the best video is the one of them rehearsing a quiet Call to Worship Nancy wrote.  This is what it sounds like when the Holy Spirit sings along with you.

The lesson for today, the 22nd day of Lent is simplicity.

I enjoyed this so much. Thank you so very much for sharing this video and blog. Also, the candle and poem arrived today and are treasured.

You might be eligible for a new government sponsored solar energy rebate program.
Find out if you qualify now!