One of the duties and privileges of being an elder in the Presbyterian church is attending meetings of our regional body called the Presbytery.    Yes, there is a lot of Robert’s Rules of Order involved and similar mind-numbing attention to details, far more than this free-spiriited chick enjoys.  But they also have snacks and you know how I love snacks. Plus, once in a while you get to meet some amazing people and hear some awesome stories.

On Saturday I heard about five people tell about their faith journey.  One of them was really special because I’ve known Jamye Dunlap all her life and have followed her faith journey toward ordination as a minister.  It was a delight to be able to vote and affirm her call to the ministry.

But it was Princeton Abaraoha who blew me away.

I already knew Princeton’s son, Daniel.  A couple of years ago I took some elementary school kids to a  retreat at Camp Gilmont.  I always know there will be some kind of emergency once I drift off to sleep and that year it was an asthma attack. And, of course, she didn't bring her inhaler.  They never do.  Adults and children alike--never have the medication for what will invariably attack them at a retreat.

I can deal with stomach aches, headaches and sore throats.  I can even do blood and broken bones.  But asthma, frankly, scares the shit out of me. I needed help.  Badly.  And fast.

I knew there would be other youth with asthma at the retreat  so I went to the staff resource room and found about 15 high school leaders who were staffing the retreat.  All I had to do was lift my voice and problem and within 30 seconds I had Daniel Abaraoha at my side.  Daniel gave my friend a brand-new inhaler with just the right words of comfort and understanding. He gave us his room number in case we had any more problems later in the night. He followed up with her the next morning to make sure she was OK.

So, I knew his dad would be nice.  But I had never heard his story.

When Princeton Abaraoha was 13 years old in Nigeria the military came for him and made him a child soldier.  They taught him how to kill and hardened his heart. After four years they discarded him and sent him home as a different person.  He told us that eventually he was “introduced to the bible by missionaries and has not stopped talking about Christ since.”  He knew his next step had to be finding the families of those who he had killed so that he could ask for their forgiveness. Friends warned him not to do this because he might be killed himself.  But an astonishing thing happened. He found forgiveness from those families before he even spoke.

Through the unbelievable grace of God and the love of strangers his faith strengthened and he became the man he is today-- a man who created an angel like Daniel and, soon, an ordained minister.

We also received a written report from Christians in Egypt.  From the midst of intense demonstrations this message comes:  “It is untrue to depict Egyptians as divided into two groups:  one for Morsi and the other anti-Morsi; it is rather a whole nation standing against one group which includes the Muslim Brotherhood and their allies.”

Then I got an email from Linda Terpstra.  Remember my blog from two weeks ago about the guy from Iraq?  A group from the Garland church went to hear him speak. Here's how Linda described it:

“He basically told his life story, starting at age 8 being raped by a rifle barrel. Amazing stories of hardship and cruelty under the reign of Saddam Hussein. But throughout it all he had an attitude of forgiveness and tolerance and not striking back. After he came to Dallas with his mom and at least one brother, another brother was arrested and sentenced to death in Iraq. He was a painter and hoped Munir would be able to get his paintings exhibited in Dallas. He was given a last request before being executed. He asked for a paint brush, and they chopped off both his arms. It was very difficult to listen to and very amazing to hear his attitude of forgiveness -- amazing for a young man of 25. It was like listening to Ghandi or Mandela. He is in college here, and hopes to start a foundation to create a school in Bagdad for young people to learn to be public speakers like him -- I think to tell their stories. He learned English as a kid in school because England was earlier a presence there. He became a translator for the US Marine corps at age 16. He is on the fast track to become a US citizen. He was surprised that the breakfast gang was there!”

I bring you these three stories today because you might like to remember that the world is much bigger than the state of Florida.

And I tell you these stories because it rained a couple of days ago.  It was the best kind of rain and the kind we seldom get in July in Texas--  one of those soft, drizzing, soaking rains.  We really needed it. The grass has withered, curled and turned yellow in all the parts the water sprinkler misses. I have been watering all summer but there are limits to watering:  the sprinkler puts out a circular pattern.  With that kind of pattern you either miss some spots and have double water in other spots.

If I arrange the sprinkler so the edges of the water just meet then I end up with gaping holes where no water reaches. That's not good for the grass in that area. 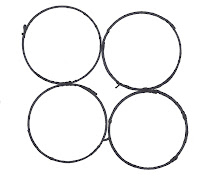 And if I arrange the sprinkler so I don't have any places with no water then I end up with places that have too much water. That's no good, either.  Too much rain causes a fungus.  And a fungus can kill your grass. 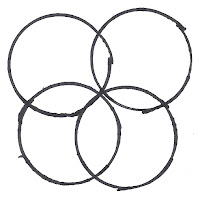 So that's why I loved the rain. The only way to get water equally to all the vegetation is through rain.  And I remembered the scripture found in Amos 5:24 -- "Let justice rain down like water."

We all want justice. And we want it equally. We don't want some to receive more than others.  And we don't want anyone to go without it. But sometimes we don’t get what we consider to be justice.  What is justice for Trayvon Martin may not be justice for George Zimmerman.  And vice-versa.

Only God provides real justice, the kind that rains down equally on us all.  Only God knows the truth.Only God knows everything.  God administers justice according to God’s willl and knowledge. And, although it is agonizing,  we have no choice but to wait on God for justice. God has eternity to unfold the entire plan.  We don’t.  And that is the frustration.
Posted by Jane at 11:42 AM