Everyone has a story. Some are more interesting than others. I met a woman whose story is worthy of a whole book. I don’t have enough time to turn it into a book but I can tell you a hell of a story.

Mrs. Sofie Fredrick is 86 years old. A friend at bible study met her when she ran into Miss Sofie at a local nursing home. They were both visiting other people. But Leeann heard enough of Sofie’s story that she knew she wanted her to come speak to the bible study group. Just to make sure she could pull this off Leeann invited me to lunch with Sofie and her. We listened spellbound for over an hour and I took notes like mad. We invited her to come speak. She came. I took notes like mad again. And here is what happened: 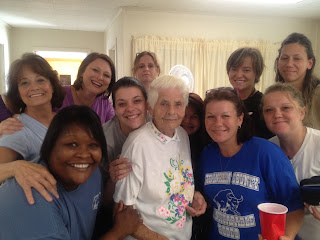 We gathered our usual bunch of around 24 women in a circle at tables. Sofie stood at one end of the circle and talked for two hours in a small frail voice. She neglected the glass of water offered her and the chair set in front of her for support. She simply stood there and talked.

She was born in Poland in 1926 to a Catholic family. Her parents had a farm. Her father died when she was 8 years old…before she was old enough to learn how to milk a cow. That was an important detail to her. Because later she would need to know how to milk a cow.

She was 13 when Russia invaded Poland. The soldiers came and took her mom with little explanation leaving Sofie and her brother and sister alone in the house with no food. After three terrible days of hunger and worry her mother came home. The Russians had “indoctrinated” her that Stalin was their God now. Then they raped her and sent her home.

Her mother gathered the kids and explained that they had to watch how they talked. They needed to act dumb and blend in.  They couldn’t talk about religion. They carefully took the pictures of Christ and the crucifixes off the wall and hid them in the barn under the hay. That’s why Sofie claims the Russians were worse than the Nazis. The Nazis took your life. The Russians took your religion.

Then the war shifted and the Germans came. The Germans took all the Jews to the camps. But that left the Jews’ farms with no one to run them. So the Germans came one day and took Sofie. They took her to a work camp. They cut her braided hair off and told them to undress and wait in a building..

They all stood naked and waiting for a long time. Then the lights went out and a mist spread throughout the building. Her eyes burned so bad she thought they might pop out of her head. Some of the women collapsed. When they opened the doors everyone fell out gasping for air. Sofie said it had been a chemical designed to kill lice.

A few days later, they lined everybody up and let the farmers in town come by.  Each farmer could pick one girl. She was sent to a German farm to help take care of the cows and other livestock. She had to learn how to milk a cow and sometimes in the evening her hands would be so swollen she couldn't close them. She lived there 8 years and learned to speak German. She lived as slave labor with only 3 hours free on Sunday to attend church. She wasn’t allowed to write her family.

She found out later that her mother and sister had been sent to Russia. They never knew what happened to the brother. Her sister had been accused of stealing food and sent to a work camp in Siberia and no one heard from her again.

When the Americans came and liberated the camp she was warned by the underground not to return to Poland or try to go to Russia to look for her mother and sister. So she found work at the American military base working in the laundry and kitchen.

And that is how she met her husband. The military couldn’t date girls from Germany but Polish girls were OK. A friend introduced her to John Fredrick. He was a good Catholic boy from North Dakota who happened to speak German. Eight months later they were married. Her wedding dress was made out of a parachute she bleached white.

She finally managed to locate her mother in 1972, 27 years after they were separated. Her mother was still in Russia and the officials sat in on their meeting, listening to every word that they said to each other. No one ever knew what became of her sister and brother.

This is Sofie’s story. I tried to tell it here as I heard it told to me by an 86 year-old woman. Some of the facts or dates may wobble a bit but the story is clear. Sofie says if you have seen Schlindler’s List then you know how it happened. She says the movie described the conditions in the camps accurately.

I’ve heard her tell the story twice now and the one theme Sofie does not waiver on is her claim that the Russians were worse than the Germans. The Germans only took your life. The true culprits were the Russians, the ones who took your religion. No one knows what happened to the religious pictures and symbols they hid under the hay in the barn in 1939 but if you go to Miss Sofie’s house today there are plenty.
Posted by Jane at 3:00 PM