OK, listen up. Today I have probably the most brilliant idea ever. And it’s so low-risk that it’s probably a sin NOT to do it.

It’s Back to School shopping time.

On two major shopping days recently—last year the day before school started and last Christmas Eve-- Emily and I realized that we were finished shopping. It was the most glorious feeling. We were just through—it had all been done. But we knew a lot of people weren’t of the same fortune. We knew what a madhouse the stores would be and that made it feel even more glorious. We knew the hell that others would be facing. The sight of Target’s shoe aisle on the day before school has been burned into my memory like a multi-car accident where everyone was killed and there was blood all over the concrete. And the vultures had arrived to pick through the remains.

But, for us, there would be no last minute drive in the cold (Christmas Eve) or heat (Back to School.) No worries where the money would come from or whether we would make the right choices. We were done. The die had been cast and there was no use worrying about it anymore.

Last year on Christmas Eve we got to patting ourselves on the back so hard that it almost hurt. We decided to go to Walmart just to watch the other suckers stress out and indulge in the high we knew we could get from feeling superior to others. I realize going to a store merely to gloat is not the most honorable of intentions but hang in here with me. It gets better.

My daughter does not do crowds. She is easily overwhelmed by having great hordes of humanity huddled around her. On most occasions when she enters a store that she knows is going to be a madhouse she will run through a couple of Serenity Prayers and a St Francis of Assisi right there in the parking lot, then take a deep breath before she even exits the car.

Last Christmas Eve, St Francis’ prayer rested upon us in a new way and we were able to hear the words clearly:


“Lord, make me an instrument of your peace.” 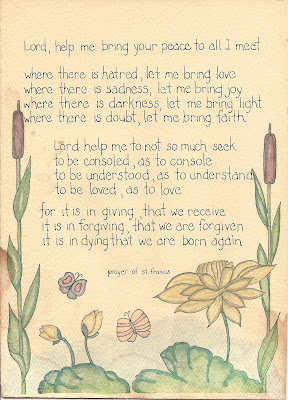 And it changed our visit completely. We decided that instead of gloating we would pray as we walked through the store. It was that simple. We made a plan. We would split up in the store. Walk around and pray for the people we saw. Then after 30 minutes, we would meet back at the door and go home.

It was one of the most spiritual things I’ve ever done.

Emily headed off for the Last Minute Panic aisle where the store puts the baskets of assorted perfumes and toiletries for the grandmothers who already have everything, including five similar baskets from the last five Christmases. She figured that would be a stress-filled aisle.

I thought my time would be better spent in the baby department and the liquor aisle.

I saw young parents with baby in tow and furrowed brows wondering how they could afford anything and what bad parents they would be if they couldn’t provide a Christmas for their children.

I prayed that they might relax and realize they don’t have to spend as much money as the TV commercials tell them. That the fantasy of well-dressed and attractive parents waltzing through the store with sleighbells playing in the background is just that- a fantasy. I prayed for those without a Christmas bonus or for those who had no job. I prayed for young mothers without partners to help pay for things.

Then I went by the aisle where they sell beer and wine, knowing there would be living rooms where too much would be consumed that night and the next day, sometimes enough to ruin the day for the rest of the family. I knew what that kind of family lived through. I knew these people needed my prayer.

I felt very un-tethered walking around the store. I didn’t have a basket or even a purse so my hands were free to rest in my pockets. I felt relaxed. I had no agenda. I walked slowly.

There was also a feeling of being part of a great conspiracy. No one could guess my motive by looking at me. I was a Secret Prayer Angel.

Thirty minutes later Emily and I met up at the store’s exit. When we compared notes there were no startling inspirations from the exercise. We’ll never know if it made any difference. There might be people out there that would be angry if they knew what we had done—a couple of pushy Presbyterians armed with prayer. But I can’t imagine it hurt anything. We didn’t foist off our own spiritual agenda. We didn’t get any more specific than just asking God to bring peace to the people we saw.

The last Old Navy order has arrived at Emily’s house. School supplies have been bought for a while now. We plan to have a pleasant and peaceful day before school. (In the interest of complete honesty, it hasn’t always been this easy. Read my posting on Back to School Nervous Breakdowns  Click here for that link.)

We plan to do another prayer session this year. I invite you to join us. In fact, I urge you to do it. This might be a good movement to go viral. I might even suggest this to one of my favorite national grass-roots bloggers, Glennon Melton. ( click here for that link.) This sounds right up her alley.

We have nothing to lose by trying.

School starts next Monday here in Texas. Emily and I will cover the Walmart on Broadway in Garland. The big new one by Northwest Highway is up for grabs.
Posted by Jane at 11:27 AM