Last Thursday was Maundy Thursday, when the Christian Church remembers the day Jesus gave us a new commandment to “Love one another as I have loved you.” That same day I saw this in action.

The night Jesus ate his last supper with his friends, after the meal was over, he washed the disciples feet. As a 21st century Christians it’s hard to wrap our heads around this one. We consider our feet today from a totally different perspective. We pamper them, paint their toes and quite frankly, use them very little, especially since the invention of the remote control of everything from TVs to ceiling fans. The idea of putting our feet in the hands of others has been delegated to salons where we pay money to clean them up. No longer a workhorse, they have become instead a vehicle for accessories.

Foot washing in Jesus’ day was very different; both an intimate and a very practical matter. Everyone was walking around in sandals over dirt roads. Their feet got dirty. When you visited someone’s house they would have a servant take care of your feet as an act of hospitality. Putting your feet in the hands of others was more culturally correct than it is today.

However, the idea of this ritual fascinated me and I began looking for the modern day equivalent of footwashing.

Then I visited Pearlington, Mississippi after Hurricane Katrina where I helped installed Shirley Thompson’s toilet. This act was both necessary and intimate. She needed a toilet (practical) and here a couple of total strangers were asking her where she wanted to put the toilet paper holder (intimate). Footwashing.

Last Wednesday our area had tornadoes come through and skip over four nearby towns. We spent the day worrying about loved ones. Emily called me from the bathroom of the day care center where she works to tell me she had 16 toddlers in there with her and needed to know what the radar was showing. Some of the schools went into lock-down mode. Some stopped answering their phones completely. Emily didn’t have to worry about this so much after she dropped the phone in the toilet while holding one of the babies and trying to find a radar app.

That evening and the next morning we spent taking attendance to make sure the people we love were safe. Everyone I know was fine, Thank You Jesus.  But it was small consolation.

One of the hardest things to do is watch someone in pain and not be able to help them. When disaster strikes, compassionate people are in desperate need to help, to change the situation. When the person receiving help tries to thank them, the inevitable answer is “No, thank YOU for letting me help.”

I have about three friends in Forney, one of the towns hit. When I took attendance I asked one friend what I could do to help. She said her church was organized to coordinate volunteers and I could join their team. 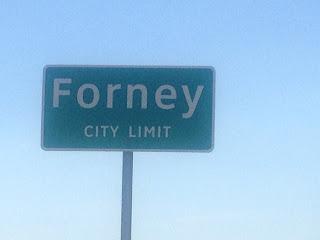 I met Kim when she came through the drug and alcohol rehab where I go for weekly bible study. She graduated from the program and went home looking for ways to minister to others. Because she was so familiar with the ladies at the rehab it was only natural to see if any of them would be able to go with me to help. So, Thursday after lunch we filled my car with strong backs, warm hearts, a bunch of tools and a jillion pairs of work gloves.

This storm was almost the total opposite to what I found in Katrina recovery. Hurricanes are nasty and dirty. They leave raw sewage, live snakes and dead fish in their wake. In comparison, tornadoes are relatively tidy. They usually come in the spring when everything is green. They tear everything apart but leave a nice rain to wash it all off. Hurricanes destroy everything. Tornadoes are fickle; they can totally destroy a single house and leave the neighbors’ flower garden untouched and still beautiful. 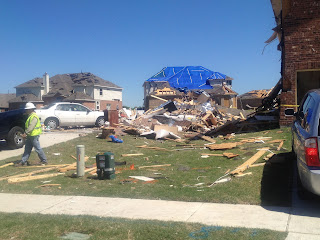 Forney had immediately organized themselves into two sites, one church to accept and disburse donations of food and clothes. A second church organized people to work in the neighborhood clearing debris.

At the Community Life Church they had one gigantic room filled with clothing. Another room for water. Another for food, still another for toiletries and diapers.

Their foyer had tables filled with hot food for the volunteers and homeowners. Chick-Fil-A had left a thermal delivery bag full of hot sandwiches. There were donuts and hot coffee on another tabled and one whole table of lemonaide and cans of soda and snacks.

We were sent into the clothing room and told to organize the men’s blue jeans. Someone found a roll of duct tape and we wrote sizes on the tables and started sorting. It was a gracefully hurried, no-nonsense atmosphere. No one wasted words or motions. As quickly as we got a stack of jeans built up another person would box it up and label the box with the size. Eventually we ran out of room and started taking the boxes out into the hall when we finished. 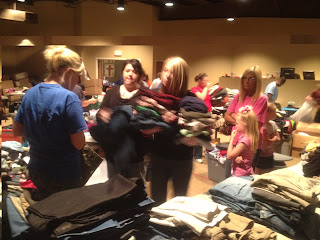 Around us were similar tables of women and children’s clothing, shoes, bedding, towels, and sleeping bags. We had far more resources than anyone needed. Occasionally someone would leave with a bag of clothing and pass someone else bringing in bags of donations.


The most dramatic moment of the day was when they called for everyone to come and form a line to unload a truck. It was the biggest truck I’ve ever seen. It was huge. And packed full of food. 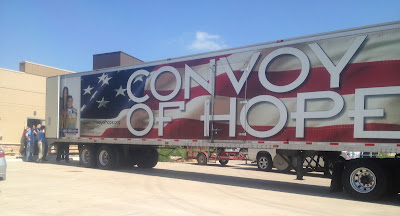 Every available person, including kids who looked around nine years old, made a chain to pass boxes from the back door, through the corridor, around the corner and down another corridor, finally ending in one of the Sunday School classrooms. 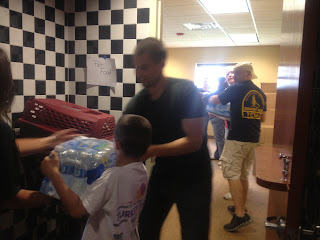 They spent an hour unloading stuff and when they finished it was still half-full and on it’s way to another church.

The remarkable thing is that this truck arrived all the way from Missouri less than 24 hours after the storm hit. It must have been loaded and ready to roll at a moment’s notice. Come March and April everyone knows there will be storms. Everyone knows what to expect. We are getting better and better at doing things we pray we never have to do.

When we left to go home for the evening the church was planning to be open until midnight and we planned to return the following day. We weren’t finished washing feet.

Next week: working in the neighborhood.
Posted by Jane at 3:31 PM