First, I gotta tell you about my most amazing tomatoes.  I’ve always planted tomatoes.  Just like Ouiser Boudreaux said in Steel Magnolias, “I’m a Southern woman and that’s what we do.  We plant tomatoes.”  People who don’t even like tomatoes still grow them. It links us to a past when it mattered if you had a garden.  It wasn’t a hobby, it was dinner.  It’s also one of the best conversation starters from May through October; ask anyone about their garden and you’re good for the next thirty minutes or so. Everyone in the South plants a garden and it always includes tomatoes.

My garden here in the country usually starts with great promise then turns sickly.  Our dirt is called sandy loam but I think my particular patch of heaven on earth is closer to just rocks than loam.  But this year I built a raised bed and bought some really expensive dirt from the gardening store.  Yes, friends, I bought dirt. I put the bed  in a new location that gets more sun.  I didn’t fertilize it because I kept forgetting to. The garden could have passed as totally organic except that I did spritz it with insecticide a couple of times when it looked like the grass hoppers were calling up a plague. And that’s about all I did. 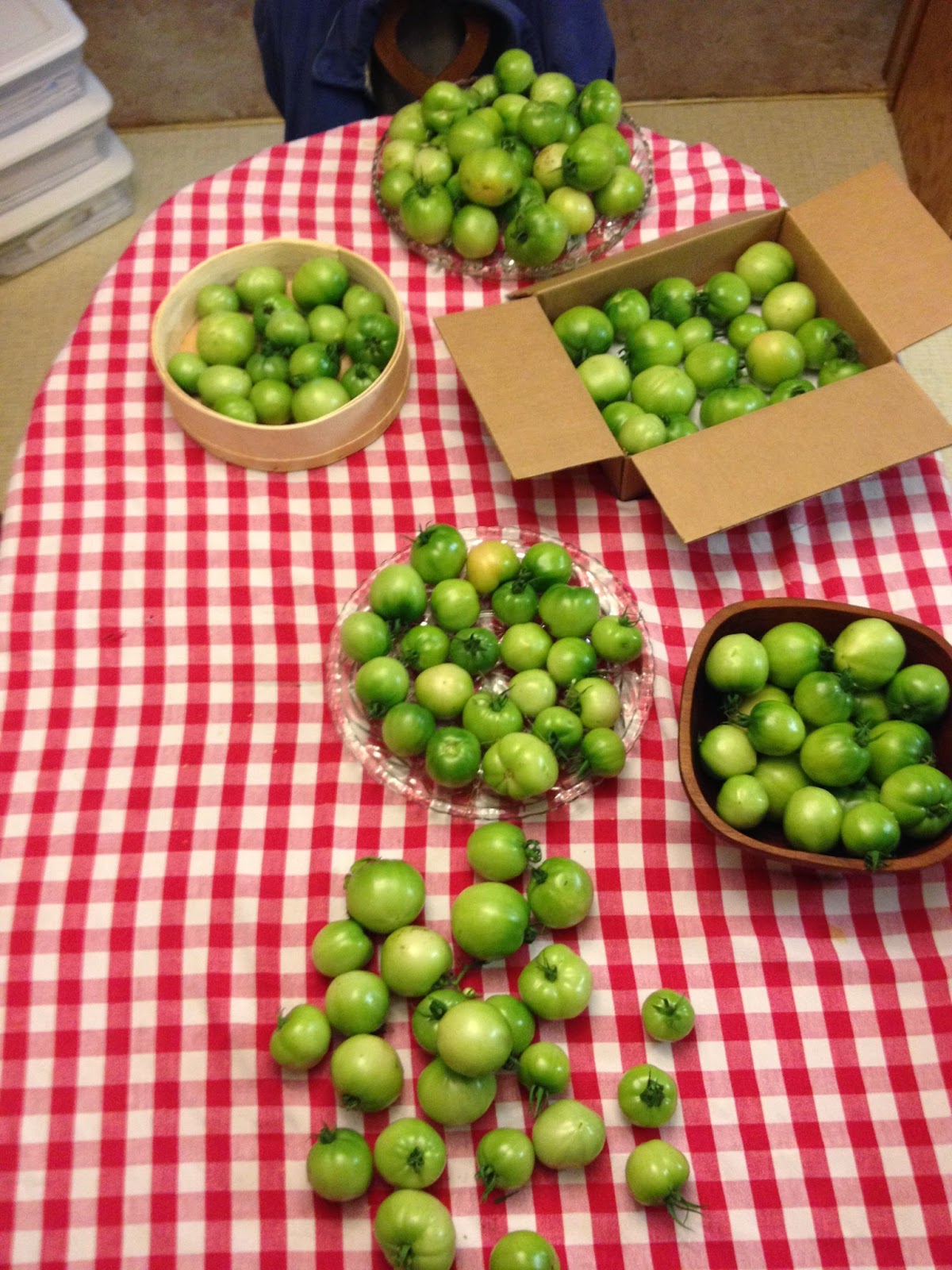 Maybe God just felt like She owed me one good year after all the years of yellow wilted leaves and dropping blossoms. The next thing I knew the plants outgrew their bed, lapped over, then rooted into the ground and started spreading out toward the surrounding grass.  I started getting 3 or 4 tomatoes a day.  The foliage extended a good ten feet beyond the raised bed which I could no longer see.  It grew into a massive jumble of leaves, blossoms and tomatoes.  It was hard to see inside the mess and I had to part the leaves once in a while to spot tomatoes hidden behind the thick foliage. It became a delicate balancing act to keep from stepping on the vines rooted in the grass in order to reach the tomatoes ripened in the center.  We ate more BLTs  just in this one summer than probably my lifetime.

A couple of days ago we were predicted to have a freeze so I enlisted Emma’s help from next door and we started picking tomatoes.  I started clipping the vines on the outside edges, slowly working my way to the center and handing the green tomatoes to Emma.  I wanted to see inside the box to count how many plants were producing this incredible bounty. I didn't remember buying all that many plants.  We filled two grocery sacks then went back for more.  We decided to weigh them.  Emma got on the scales holding the tomatoes and we wrote the number down, she got on the scales by herself and we did a simple math problem to calculate how much the fruit weighed. We ended up with 40 pound of tomatoes. We finally quit for the day because she had to go home for dinner.  The next day I finished up, getting ten more pounds and finding the plants that were the source of it all:  five plants I had bought at Walmart for probably 2 dollars each.  I think it’s safe to say we turned a tidy profit in tomatoes this year.

I started growing tomatoes when we lived in the Oak Cliff section of Dallas where they have much better soil than my house here in paradise. We had a neighbor across the alley we called Oma.  I met Oma right after we moved in.  I was standing at my kitchen window and saw her on the top of her house sweeping leaves off her roof. She was closing in on 80 birthdays and still did all her own yardwork.  She kept a garden in a tiny spot about 10 feet by 15 feet.  In this small area she grew just about everything she needed for her table:  tomatoes, onions, peppers, squash, potatoes, okra and green beans. She often brought us vegetables when the day’s harvest was more than she could eat.

She taught me to garden by the seasons.  You needed to have your onions and potatoes in the ground by Valentine’s Day.  And her goal every year was to keep her tomatoes going until Christmas.  To accomplish this she watched the weather with a keen eye and covered her plants if we had a freeze.  We could start eating from her garden by Mothers Day when the potatoes and onions were ripe. By Father's Day she would get green beans and we could have that dynamic duo of springtime: green beans and new potatoes with onions and seasoned with bacon.  By the end of the summer she would have diligently picked okra and green beans every single day.  As soon as they showed signs of slacking off she pulled them up for the compost pile so she could concentrate on the tomatoes.  And then one glorious Christmas afternoon she called me to come over and see the single ripe Roma tomato on her vine.

Oma was probably the first saint I knew.  She taught me that a woman can take care of herself, that there was no need to whine about being a widow, you just keep on keeping on. She could babysit on five minutes notice and if I forgot to take diapers, I might find Elizabeth returned to me with a dish towel pinned on her.  Oma was no-nonsense but always agreeable.  I think she loved us as much as we loved her.  We shared more than a few evening meals together and she would bring the fruits of her garden for the pot, always adding just a pinch of sugar “to bring out that fresh taste,”  she would say. We became our own little family of sorts.

She knew how to live by her own wits.  She made most of her own clothes. She had plants all around her house and could take a cutting and show me how to root it for my own yard.   She painted her house herself.  She was a master Tom Sawyer. She showed up one day asking Beaven to show her how to change the oil in her car.  He insisted on doing it for her and from then on she would come to our house and simply hand him her car keys and the new oil. When we sold our house we tried to tell the new owners what a great neighbor they had in Oma but I don’t think they believed us.  Then when fall arrived the husband called to ask Beaven how to light the pilot light on Oma’s furnace and we knew they had been adopted by our saint.

All Saints Day is one of my favorite days in the church calendar.  It’s the day after Halloween:  All Hallows Evening becoming Hallows Ee’n becoming Halloween. In a lot of churches they call out the names of the members who died in the last year.  But they also point out that you don’t have to be dead to be a saint.  You don’t even have to be especially good to be one, either.  All you have to do to be a saint is believe in Jesus Christ. That’s the fine print I always like to point out because it generously allows me to be included.

All Saints Day is a day to remember all the people who guided us to the right path on our journey.  Linda McCormick calls them her “balcony people”—angels in the balcony singing beautiful music of encouragement over us, urging us on to do our best, to be reassured that God has a wonderful plan for our lives and there is a place for us in heaven.

I invited my facebook friends to list their saints but I didn’t get many responses.  I think that once people started thinking about it, the list grew and grew until there was either not enough time or paper to list them all or they realized there would always be someone left out, memories being such a fickle animal.  I know this because I ran into the same problem myself.  My cloud of witnesses is too large to single out individuals.  If you have ever seen the stars in a place like Guatemala or the Grand Canyon you will know what I’m talking about. Beyond the light pollution you can see that there are so many stars in the sky that you can’t spot individual stars; they become a cloud of stars, a smudge of light in the darkness.

Therefore, since we are surrounded by so great a cloud of witnesses, let us also lay aside every weight and the sin that clings so closely, and let us run with perseverance the race that is set before us,  looking to Jesus the pioneer and perfecter of our faith, who for the sake of the joy that was set before him endured the cross, disregarding its shame, and has taken his seat at the right hand of the throne of God.