I'm going to post early this week. My grandkids are about to hit the door and it will be chaos for a couple of days. Then, almost as soon as they leave, I'll go to Tulsa for the Synod Youth Workshop. I can't wait to get there--it's my favorite week of the year. It always provides me with a good time and a story or two. Give me a week off and when I get back I'll be here for a couple of months.


I said that my favorite thing about mission trips are the cool people you get to hang around with. A couple of really special people I met at the jobsite were college kids from the US who just wanted to spent some time volunteering around the world.

Ashley Abaie is from Arizona, I think, but she went to college in Virginia at William and Mary. She has been studying liguistics but decided to take a year off from school. She came up with an intinerary that includes Chile and South Africa after she leaves Mexico. When her year is over she expects to transfer to Berkley to study some sort of Environment Development –Save the Earth kind of thing. She’s raising the money for all of this by herself and said she’s basically self-supporting and always has been. 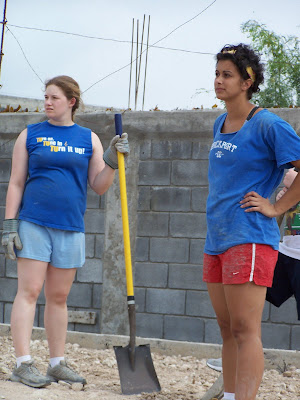 But it was Chucho that gave me the best surprise. I never did get his real name. I think his first name was really Chuck. When I first saw him, I thought he was one of the teenagers with a big group from North Carolina who had arrived that morning. He couldn’t have been any taller than me and had a thick head of curly hair but the guy didn’t look old enough to shave. He came up to our group as we were mixing concrete and just picked up a shovel and started working. I noticed he wasn’t doing things the way Annette had told us so I said (in a very nice way, I’m sure) that he was doing it wrong. In a few minutes, Annette came up to greet him like a long lost friend and asked how his past year had been. She told us he knew what he was doing and to listen to him. He resumed doing things his way and, after giving us enough time to see that his way was ten times better, we followed his leadership. I was blown away by his strength and energy.

Well, he turned out to be not only older than high school by far but the strongest and most energetic young man I’ve ever seen. This was his second year to volunteer with Faith Ministries and I think he was planning a gap year like Ashley was doing. He was fluent in Spanish and totally relaxed in his skin. I never found out which college he goes to but I did find out that he graduated from Highland Park High School in Dallas. This put him in the wealthiest neighborhood in town with the bluest of blood in his background. I also never got his last name, though I asked about four times and he ignored me each time. If he was from Highland Park there is no telling who his parents are or how wealthy. Yet here he was in Mexico mixing concrete.

On most days when we crossed the border going back into the US to spend the night in McAllen we were just beat—dirty and beat. Damon would let everybody out of the van to walk through customs and he would drive through alone. This was probably a lot easier for the border guards and we were ready to get out a stretch a little. Only on the last day when we went back into Mexico for a little shopping did he let us stay in the van as we passed through customs.

Damon has a healthy respect for the fact that we’re crossing a national border and that everyone has lost their sense of humor since 9/11. These were the few moments of the week when joking was set aside. He told us that if people anticipated the questions that the border would ask and give the correct answers in a respectful way our chances of a smooth crossing would be better. So we began rehearsing a mantra of answers to the questions: Are you all US citizens? What were you doing in Mexico? Are you bringing any fruit into the US? Are you bringing any liquor? Damon also made it clear that we would obey all the laws and pay any taxes necessary. The legal age to buy liquor in Mexico is 18. So it was OK to bring tequila back but we wanted to make sure declared it and paid the taxes on it.

We turned into a chipper but ever so respectful bunch with our well-rehearsed answers, all issued in unison with smiles: “Yes sir, Just shopping, sir, No fruit, lots of booze.”

One evening I walked into the kitchen to find Annette and her sister-in-law, Sandra, looking through the kitchen pantry together. Last year Sandra, who is an attractive young Latina had brought the volunteers a meal one night during the week. She brought it from her home there in McAllen. After she got home that night she realized she had left the lid to the roasting pan in the kitchen at the church. But when she went back later the next week to pick it up, the ladies of the church told her it wasn’t there. Without making any attempt to find it, they simply stonewalled her and Sandra had to go home without her lid.

As she and Annette told me the story I realized that if the same thing had happened to me, with my gray hair and white skin, I would have been invited to roam their pantry at will and gone home with the lid to my roaster. Sandra didn’t have my age or my skin. I realized with a chill that prejudice is still alive in the Christian church in the 21st century--even in a congregation that regularly welcomes volunteer groups like ours. I felt like I was watching the last scene of Giant.

After lunch each day we would have a little worship service where we would sing some songs, pray for people, dedicate a house or two and praise God for everything. 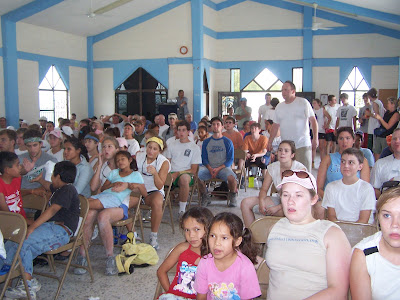 Wednesday I found myself sitting next to a woman holding a six-month old boy named Carlito. After a while Carlito got restless and I reached out to stroke his head. I realized the kid was teething and I did what all the women in the world do in that case—I gave him my knuckle to chew on. I tried to remember what I had touched that day and decided a little concrete wouldn’t hurt anybody. So Carlito spent the rest of the service happily chewing on my finger. That particular day a huge Presbyterian church from Charlotte, North Carolina was with us and had brought their hand bell choir of about 40 teenagers. They played a magnificently ornate Easter hymn that literally rang out to the whole community. They couldn’t have asked for better acoustics than the brick walls and concrete floor. Each note resonated as though designed for that moment. After the handbells, the youth choir sang a couple of songs in the Presbyterian Hymnal that are in Spanish. I knew both of them but my favorite is always Pues Si Vivimos (When We Are Living-hymn #400). There I sat with Carlito gnawing on my knuckle, not sure which of us was enjoying it the most, Carlito or me, his substitute Abuela. Then the choir got to the second line in the song:

Through all our living, we our fruits must give.
Good works of service are for offering.
When we are giving, or when receiving,
We belong to God, we belong to God.

At that moment I felt such a bond with Carlitos that tears came to my eyes. I wasn’t really sure which of us was giving and which was receiving. I may not have been able to shovel concrete but I could love a baby. Somos del Senor. We belong to God.
Posted by Jane at 2:17 PM

It's one of my favorite hymns as well, but we don't sing in Spanish here in NOVA.
I read every week and so enjoy your blog...will miss your time off but I know what a refreshing blessing SYNOD can be!
Hugs,
VB