A Letter from Fannie

As promised, I received a letter from Fannie.  Fannie is a busy gal and I'm used to her always sending me notes from around the world.  Ever since her time in Guatemala when she spent some time with the Quetzal birds learning about the peace and justice issues in that country she has dedicated her life to helping others.  Shortly after that a friend, Mamie Broadhurst, caught sight of her in North Carolina and sent me a photo.  Neither of us were sure what it meant and I'm not really sure if the picture was taken before or after Fannie checked into the Betty Ford Clinic but it does show that Fannie had started questioning things. 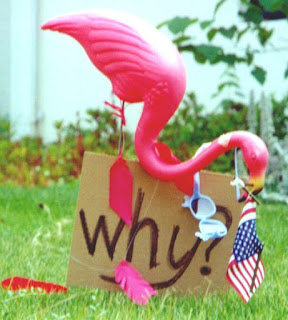 But every since then Fannie has been on the move wherever there was a need.  She was in New York City on September 11, 2001 and helped lead people across the Brooklyn Bridge when  they were able to see her bright pink plumage through the gray dust.  Then she stay on for weeks afterwards to managed the Displaced Pigeon Project, helping to find new homes for all the pigeons who had lived atop the Twin Towers.  For that work she received a nice plaque from Mayor Guiliani.

She did so much work and kept moving so fast after Hurricane Katrina that no one was able to tie her to any one agency or effort that could recognize her efforts.  Suffice it to say that she has a bed and a bowl of gumbo waiting for her at any house on the Gulf Coast.

I seldom see her nowadays except around the fall when she usually comes to town to see her sister Fernie who runs a funnel cake stand at the state fair. Most of her time is spent with her long-time boyfriend, Sam who lives in D.C.  He's a bald eagle--retired from the postal department with a nice pension.  She met him during the Anthrax scare in 2001.He has a nice nest on top of the Washington Monument.

But I did get a letter from her yesterday from Paris because she knows we are travelling there next week and we'll have a chance to see each other. I always enjoy a reunion with Fannie.


The State Department called and asked me to fly to Paris to help with the flooding.  Of course, I accepted at once.  A little too quickly it seems, because I didn’t realize they have cut back on their spending and when they said “fly” they didn’t mean in a luxury jumbo jet as I am accustomed to under these circumstances in the past.  No…..they meant for me to flap my own weary, tattered old wings. When I tried to complain to Michelle she just told me to get over it; I was one of the few resources they have who could shave a few bucks off the total bill and I should be grateful for my talents and I might think of losing a few pounds while I’m at it and eat more vegetables.  My, how things change when people aren’t not running for office any more.


So I arrived in Paris a little later than I had hoped or we might have been able to sandbag this lovely museum.  Instead we had to go to Plan B and move things from the basement to the halls upstairs.  Also by this time they had lost power so the only light was the emergency lights.  It was very dark and dusty work.  But since I travel without baggage or need of hotel rooms I was able to go straight to work.


Almost the first thing I did, however, was step on some tubes of paint they had piled up in the corner. Paint squeezed all over my feet.   Then I landed onto some blank art canvases they had leaning against the wall.  In the floundering about I ended up walking over one of them a bit.  I put it aside back against the wall and cleaned up my mess.  I don’t think they could even tell. It all looked like a pile of trash if you ask me.  This would be a great time to clean things up. They need to organize this place, throw a bunch of trash out and vacuum the place.
I moved to another side of the basement where I could see better and inserted myself into one of the lines where they had a kind of bucket brigade passing artwork and valuables along the line moving things upstairs to safety.  Oh, such marvels!  And these were the things deemed not good enough to show to the public.  The bargain basement of the Louvre, so the speak. Each one beautiful in its own right.

We worked until we had everything moved and were going out for a drink.  Everyone was exhausted.  Just then someone shouted out that they had found an undiscovered masterpiece of Picasso’s in the corner!!  All rushed to gather around and I was left on the fringes of the mob.  I’ve never seen people so excited in my life. Who knew it had been there in the basement all this time!  One of the master’s most dramatic works!  They started making plans immediately.  They would have such an announcement!  They would have an exhibit of the painting with some other Picassos as support pieces but with this one as the main centerpiece.  After a year, they might let it tour but wait!... it was far too valuable to allow it to tour.  They would have to convene a panel of experts to consider the matter.

I was in awe to be present at such an historic moment.  To think it had been hidden in the basement of the Louvre all this time unnoticed.


Finally the crowd thinned out enough for me to step up and see the painting for myself.  It was the canvas I had stepped on with my painted feet. But by now the project had advanced too far to stop it. If they wanted to venerate something a clumsy flamingo painted with her feet as world class art, let it be their business. Nobody understands the French.
The Seine is receding and the museum should re-open in time for your visit.  There is still a lot of clean up to do around town.  You wouldn’t believe the trash the river brought.  Just wine corks alone surfacing on the river have littered the banks with enough cork to build a boat.


See you soon!
Your friend,
the Picasso of the United States
Fan
Posted by Jane at 8:36 PM