OK, so I got my pre-ordered DVD of all of Season 4 of Downton Abbey.  That means I don’t have to wait until every Sunday to watch it.  That means I could watch the whole rest of the season if I want to. That means that I can sit back in the new PJs I just made and eat the cake Shirley sent home with me and drink a cup of coffee and enjoy having the TV to myself while Beaven is in Dallas.

I’ve gotten very spoiled.  I spent a couple of days visiting an old friend with another old friend and we had us a mini-retreat all of our own.  Shirley cooked her fool head off and it was all delicious.  Then she made Linda and I the most beautiful bowls to take home.  And THEN she sat around with Linda on the Dulcimer and played music.  It was like heaven. 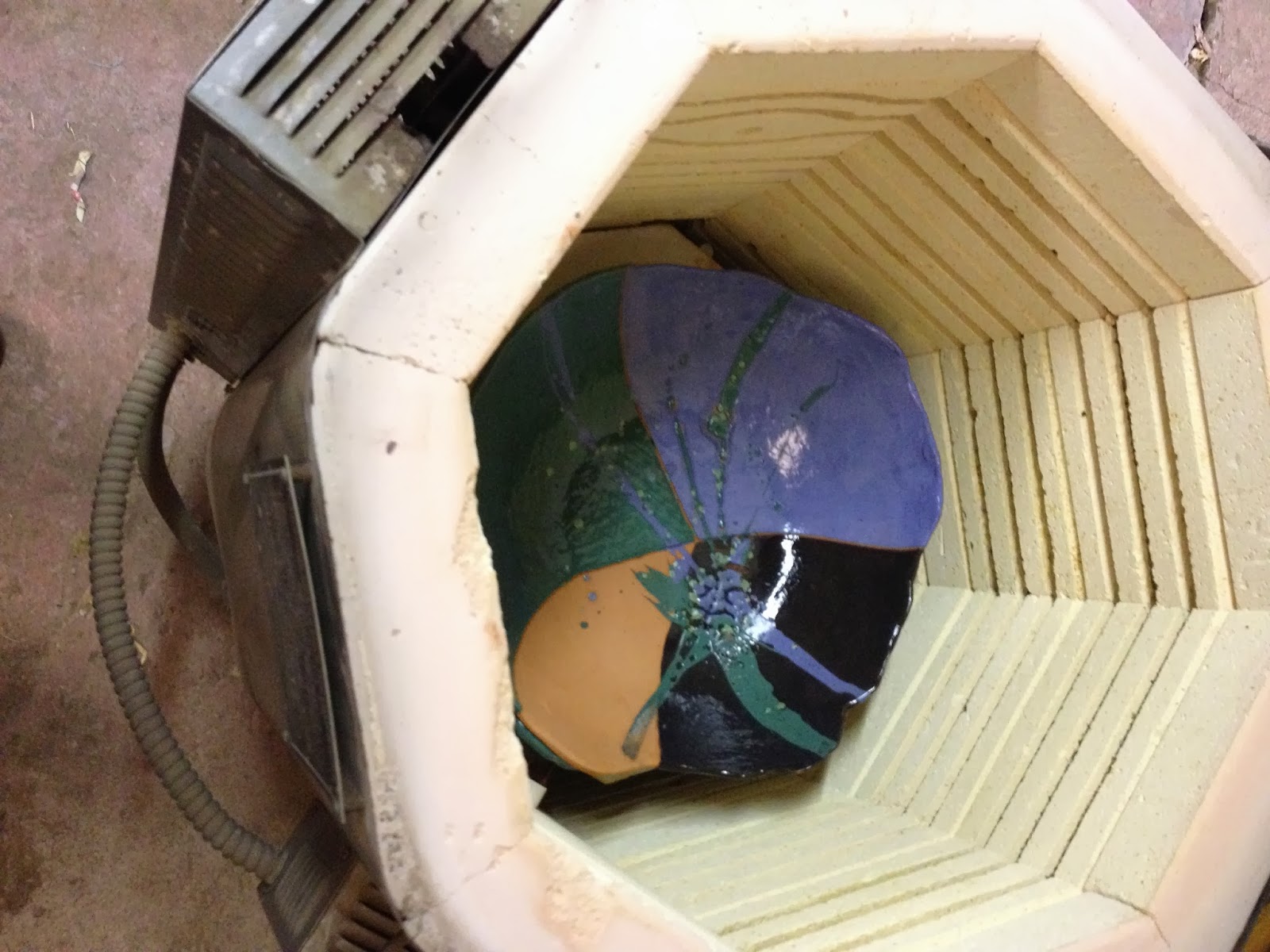 When I say she made the bowl I mean that she shaped it, fired it, painted it and fired it again. The morning she opened the kiln after the last firing was filled with baited breath and prayers.
It's just gorgeous. I think I might have to get new kitchen counter tops now.

But I have this pesky blog to write and the whole idea behind the blog was discipline. Discipline.  That means that I will force my fingers to keep moving until I get something coherent that you might enjoy reading.

Let me tell you about the time I took a shower standing on ice.

I remembered the incident when I called my friend Dallas Trammel this morning.  Apparently, New Orleans has shut down because of an ice storm so I thought I’d check in with her to see what was going on.  She lives a little bit outside of New Orleans.  They have some ice but the snow is expected later today.  No big weather emergency.  But everyone is always surprised when it gets cold in New Orleans.

Everybody thinks of heat and hurricanes when they think of New Orleans.  But when I lived there during some of the Katrina rebuilding I only remember the cold and rainy days.  You might find it interesting to hear that most of the rebuilding after Katrina was done in the fall and winter.  Nobody in their right mind would spend any time in the brutal heat and humidity of the Gulf Coast unless they lived there.  That doesn’t count the disaster assistance volunteers  who regularly show up after a hurricane– none of them are in their right mind-- no, they are in their Jesus mind when they do that stuff.

So most of the time I spent in the Gulf Coast was in the winter.  And I stayed cold.  When I went as a solo volunteer I slept in a tent.  The village manager was from Colorado and wanted to save Jesus some money so she didn't want us to turn on the heat in the tents until after 8pm.  And she didn't turn on the heat in the dining hall until she thought it was cold.  Never trust someone from Colorado to have any concept of what cold is.

We had one particularly cold spell when it got into the 20’s in the night for several days.  The camp went through all the precautions including the one where you kept a small trickle of water going in the faucets to keep the line from freezing. The only way to take a shower was to bundle yourself up and walk over to the shower trailer. Then you unbundled yourself and hoped the heat from the water will warm you. I put it off for as many days as I could until I couldn't stand it any longer. I would make a horrible prisoner of war.  Knowing that the showers used a system where the water is immediately hot and is unlimited I just had to bear the few seconds while I undressed and stepped into the shower.

As promised, the water was hot the minute I stepped inside the stall.  But after a while I noticed the floor was slippery.  I ran my toe around over it not knowing if it was some kind of slimy Gulf Goo or what. I had by now stopped being shocked by any condition I encountered in Mississippi.  Gulf Goo seemed like something new that I was getting introduced to.  One more thing to get used to. I was getting used to getting used to all sorts of things.

Then it hit me that I was standing on ice.  The shower trickle had kept the pipes from freezing but the floor of the stall froze over.  I had my own private skating rink.

It melted soon enough and became one more interesting memory.

My other exposures to cold were numerous and I eventually became used to being cold all the time.  But possibly my favorite photo from all my days with Presbyterian Disaster Assistance was the day I ran into Shirley Thompson at lunch.

It was another of the solo trips I took.  I wasn’t part of a church team so Becca just assigned me to help a church from Virginia. They sent three ladies to help paint the inside of the house. Remember-- these houses were under construction and the last thing installed was the HVAC and the plumbing.  So in any house you worked on you had no way to keep you warm and nowhere to pee. We worked all morning and the temperature hovered in the low-40's. The only comfort we had on cold days was lunch.

The First Missionary Baptist Church always provided a free hot lunch for any volunteer working in their town.  There were usually over a hundred folks at lunch on any given day.

That day I remember  walking into the building and my glasses steamed up and I realized just how cold I had been.  I hit the Purell bottle to wash my hands.  It was hard to wash the paint off my hands since it was designed to kill germs not wash off paint but if you worked it over your hands hard enough you could get fairly clean.  And any paint left was certainly germ-free paint.

After I went through the line, got my cornbread at the end and a coke out of the fridge, it was great to sit for a while and just be still.  That’s when I loved to look around the room and realize that I might have been part of a four-person crew but there were similar crews all over town.  There were usually over a hundred people at lunch.

That’s the day I looked around at the Amish crews and the Methodists and Baptists and the Canadians as well as some individuals who just came on their own.  I decided that’s what heaven is going to be like.  All those souls sitting around a table with cornbread on our plates and paint on our clothes.

Then I saw Shirley Thompson and ask someone to take our picture.  Shirley was an old friend by this time.  Hers was the first house I ever worked on after Katrina and she always told me when she got into her house she was going to help the others find resources to rebuild their own homes.  And she did—turning into an unofficial grant writer/expert on available funding. 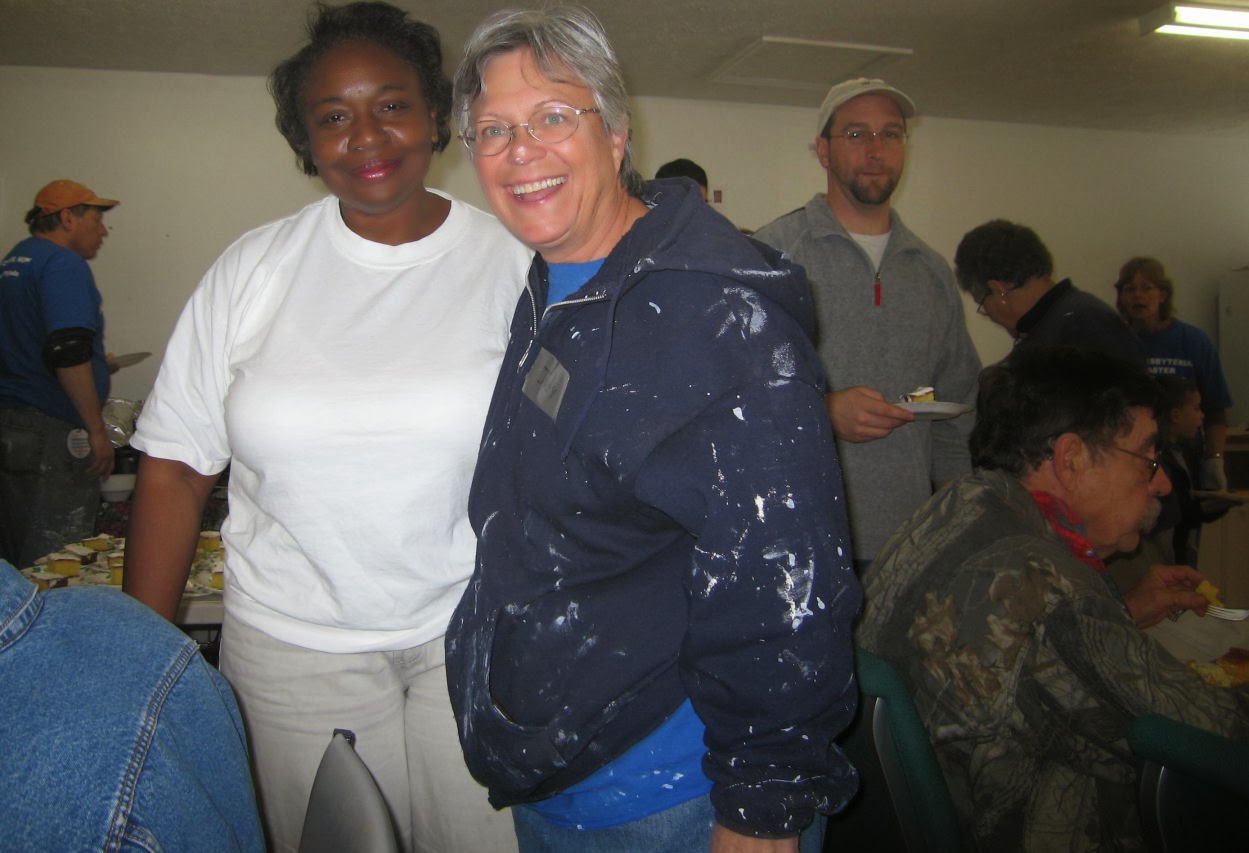 Yes, I have a touch of paint on my nose.  I remember being cold to the bone.  But I wanted to remember the day and asked somebody to take our picture.

I love this picture because Shirley and I ended up as a good team when I became a camp manager later.  She would tell me about a resident who needed help, then she would get the funding and I would provide a team of volunteers.

I love this picture because you can see the other volunteers in the background.  We were never alone in our work.  There was a whole community of warm-hearted people working in the cold.

I love this picture because I was in a warm place on a cold day. And I think that’s what heaven is going to be like.
Posted by Jane at 4:52 PM

"No one is in their right mind, they are in their Jesus mind" - Love it! Got to use that one.

I slept in a hat as often in the Gulf Coast while helping rebuild from Hurricane Katrina as I ever did camping up here in New York State in early spring or late fall. Jane, your image of heaven is perfect - Cornbread on our plates, and paint on our noses. No halos, wings or harps for us – just brothers and sisters loving each other through the tough times. I spent a great evening last night at prison helping lead a Bible study. As always, we were ministered to by the brothers there way more than we ever help them out. If that’s one thing I’ve learned about mission work it’s that we’re not doing things FOR others, we’re in ministry WITH them. And to quote a teen aged friend who preceded me into the mission field, “Don’t be afraid to get dirty!”