The only word to describe it is a “miracle.” I was breezing along typing out this blog when it happened. Well, I wasn’t breezing along. Truthfully, I was slogging—none too inspired but putting the words down in good faith. My reason for keeping this weekly schedule is to train myself to provide a fertile place for the words to come. Well, today the words came and they are good enough so I will leave them here for you. The true message came out of nowhere just as I was finishing. And it wasn't words.  It was a picture.

Let me show you what I wrote. Just go ahead and read the blog.  We'll come back to this later. Go on.

I’ve taught a lot of confirmation classes and always enjoy watching young people develop their faith. We have great curricula and teachers and statements and creeds and culture and history and I could go on and on, yada, yada, yada.

But Faith is sneaky. You can state it but you can’t learn it. You can’t go order one by sizes or shapes or colors. You can’t say, ”Oh, I’ll have what my parents have.” About all you can do is watch it unfold. Sister Helen Prejean said “the only way I know what I really believe is by keeping watch on what I do.” So you can only see it in action. It never sits still and it is never definite. At most it’s only a shadowy feeling in your gut. By definition it is not absolute; if it was then it wouldn’t be called “faith”, would it?

Hebrews 11 says that faith is believing something even when you can’t prove it. There’s no test to make sure God is there. It there were such a test and God humored us by “passing” the test then it would stop being faith and become a boring case of cause and effect.

And we come to my subject for today. Belief only applies to the person believing it.

I go back to a lunch I shared years ago with four friends. Two were Presbyterian, one Episcopalian, one Lutheran and one Jewish. The four Christians got into a conversation over whether or not the Jew would get to heaven. And I’m a bit embarrassed to say we did this right in front of Nancy. We examined the issue up one side and down the other. We were desperately trying to find a way to spend eternity with our friend. I don’t think we were worried that she would rot in the fires of Hades—our brains couldn’t grasp the logic of that one; we knew Nancy too well and knew she didn’t deserve eternal damnation any more than any of us. But I think we did worry a bit that there wasn’t a Jewish section of our Christian Heaven. And we wanted our parties to be eternal. They just wouldn’t be the same without Nancy. After all, she was the one who got us tickets to the Dixie Chicks concert. (Yes, this was a long time ago.) We kind of owed her one for that.

Only later did it settle on me what a massive lapse of grace it was to have the conversation right in front of Nancy. What an egotistical array of self-centeredness to assign ourselves a place in heaven based only on our own beliefs.

But Nancy was only a bit bemused by the conversation. She wasn’t nervous or even offended. Our beliefs had no effect on her life or even her after-life. It was very much like how I would act if Nancy told me I really, really needed to follow a Kosher diet.  That’s when I came to realize that beliefs aren’t laws.

We can legislate them into our society. We could pass a law permitting the Ten Commandments be allowed to be displayed in courthouses. We could even outlaw a religion we didn’t accept. I think Hitler already did that one. You could force people to stand with their hands over their hearts and profess a love for a government but you can’t force people to actually feel that love or think a certain way on any subject.

It’s been witnessed many times—the government outlaws religion and the people hide the bibles under the beds. Marj Carpenter wrote that when China allowed Christianity to be openly exercised people brought out stacks and stacks of bibles and hymn books they had been hiding for 25 years. When the Spanish conquered the Americas and forced Christianity on the indigenous people they continued to celebrate their Mayan beliefs anyway.

What is in my heart and my head are hidden from the world. I can choose to take them out and play with them, parading up the aisle at church in full view or I can whisper to them as I’m falling asleep at night. I can carry them inside me wherever I go and no one will know the difference. Martyrdom is a lofty goal, it can get you a great reputation but it also has a lot of drawbacks. It ends things. Beliefs carried in secret are sneaky—they survive for another day.

OK. Here’s the miracle. Remember that part? Usually when I get to the end of a blog somehow the words magically fall into place and give me an ending. As I was typing that last paragraph my cell phone beeped that I had a message.

I am not making this up. This message had no “sender.” That’s what is so spooky. And given the exact time I received it I figure this is how God wants me to end today’s blog. Here is the message. Use it how you please. 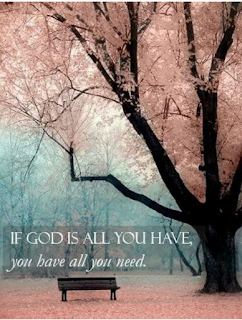 Wow. Could not have come at a better time!!