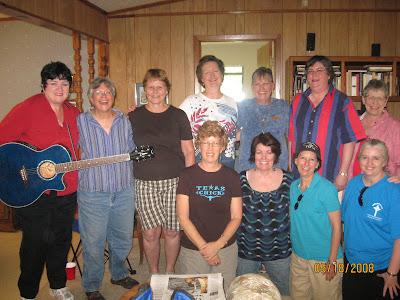 I had me a big ole party last weekend. Like I said last week, I wasn't celebrating that my husband was out of town-- it’s because he hates parties and I love them. So I wait until he's gone then have a party.

Beaven ended up having almost as much fun as I did. He came home with a suitcase full of electronic odds and ends, swooning over $3 connectors and bragging that he didn’t pay shipping charges for them. I’m not sure what he calls the airfare to get him to Ohio and the hotel bill. Apparently, not “shipping.”

In the meantime my party was about as close to the perfect party as I’ve gotten in a while. My friends really have to love me to come to my parties now. We’re a 90-minute drive from Garland and gas isn’t cheap anymore. The twelve women who came were a really special bunch.

Melanie and Miatta came the night before and we took the grand tour of downtown Winnsboro, which is about four blocks. But my sleepy little hometown has gone through a boom lately for some reason that I haven’t figured out. I think everyone else in town is as surprised as I am. There’s hardly a week that goes by without some sort of outdoor “thing”, music concerts, mostly. For a small town in Texas to open four trendy new restaurants in the remodeled 1920’s buildings and keep the restaurants full is a huge accomplishment. We ended up eating Greek food at a wine bar, complete with homemade dolmas and pita bread – and yes, this is TEXAS!! - And yes, the biggest church in town is the Baptist church and there’s a wine bar in town. Go figure.

I love to have Melanie and Miatta come. They’re both Christian Educators in different churches and they possess an array of knowledge that I savor whenever I can tap into that reservoir. We not only talked into the night but about halfway through the conversation I got on the Internet on the living room computer looking up books and facts. These are my kind of chicks. Who could have predicted one day you would need a personal computer for a conversation? I ended up with an order from Amazon and they took a couple of free books home with them. I love to offer magazines and books I’m finished with as party favors. It makes house cleaning so much easier.

Then Saturday morning the rest of the group came to join us. We ate ourselves silly and sat outside watching the birds and swapping stories we can’t tell in church. (The hummingbirds have finally arrived…a little later than usual.)

But by far the highlight of the party was the Angel Band.

Debbie, Kat, Nancy and Shirley started singing together about five years ago and I love the sound they put out. It’s straight from heaven. I started recommending venues for them and talking them up to friends in other churches. This got them invited to sing at other churches and I declared myself their manager.

I love having them sing at my house because a small room sounds even better than a cavernous church sanctuary. At our church the sound gets swallowed up no matter what kind of microphones they use. By far the best way to hear them is in someone’s living room surrounded by friends in a mellow atmosphere with the soft sounds gently massaging our souls. But they told me I couldn’t bill this as a concert; it would be more like a rehearsal that we might overhear. So they sat on the edge of the room in the shadow of the hallway, quietly strumming the guitar and having their own separate conversation and thinking through the music. Periodically we would notice them singing softly which caused our usual boisterous gossip to stop so we could hear them. This turned it into a tiny and unorganized concert of sorts.

After all of the other guests left the Angel Band stayed to practice a bit more. They were the last to leave. They stood by their cars and I knew they hated to leave each other. Since Shirley moved out of town it’s been harder for them to get together. At the annual Women’s Retreat in February for the first time in years two of them couldn’t make it and the other two tried to sing without them. But it just didn’t work. Whenever even one of them is missing from the group it’s not the same.

We talked about that. Everyone agreed that it changes the sound more than just the absence of the other voices. When the four of them are singing together they are joined by something else that enhances their sound and give it a voice that is beyond what it technically should be. It occurred to us that this is the Holy Spirit joining in with their songs. We decided to call it Five Part Harmony. 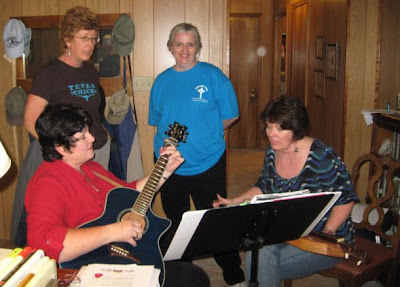 I will never forget the Angel Band singing me off to a new adventure in my life....they are so very special, as are you my friend - the one who made sure my favorite hymn was sung that day.
Love you all and miss you bunches!
VB

thanks for letting us wayfaring strangers come together. Never in my life have I been a part of something that brings me so close to spirit, as when our voices become one. thank you god
deb

I want to hear about the stories that you can't tell in church.

Regarding our wonderful visit to your cabin in the woods, I thought of the song. "This Little Light of Mine", that we all have sung since childhood. Christ's light shines in each of us to others - it's contagious. Jane, you exude a tremendous amount of this "light" energy whenever I (or others) are around YOU. Thank you for sharing your home, talents and life with all of us. God Bless! -SM

Well, you really are God's angels, but when I think of ya'll I give thanks to God for all the love you gave me in a difficult year of my life. What a blessing to actually see pictures of everyone! Jane, please tell the Garland Angels hello for me and that I love them.